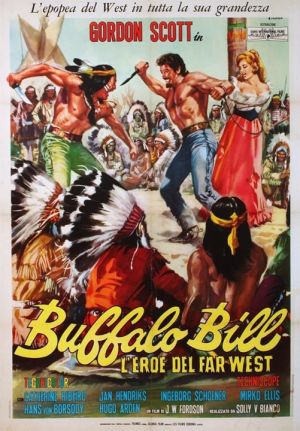 And ill-fated western with an obscure genesis. According to director Mario Costa filming started in March ‘63, which would make this one of the very first Italian western productions from the sixties. Due to a conflict with his producers, Costa lost six precious months and for some reason the film was not released before the end of next year, November 1964 (*1). Over the years, it has gained some notoriety for a series of incidents happening on the set, resulting in Mario Brega’s right hook breaking Gordon Scott’s nose. More about this later.

Director Mario Costa calls himself John Fordson and the main character is a traditional American hero (whose legacy belongs as much to history as to folklore), but the movie owes little to Hollywood. It feels more like an Italian effort to create a Karl May western. It’s largely set in and around a cavalry fort, and Gordon Scott’s Buffalo Bill is modeled after Old Shatterhand. There's the usual conspiracy of a greedy white villain and a renegade Indian, in this case a ruthless arms dealer hungry for gold, and a Sioux warrior, thirsty for liquor. William Cody, alias Buffalo Bill, is ordered (by president Grant himself!) to find out why the great Sioux chief Wise Fox has broken the peace treaty. He’s soon on the right trail, but then the villains kidnap the chief’s daughter and put the blame on the soldiers from the fort …

Costa has claimed that his film was the first Italian western from the 60s, but that this six months delay (due to a difference with his producers), had ruined the film’s chances. In his words:

“In the meantime Sergio Leone had realized A Fistful of Dollars, a shameless copy of Yojimbo (…) Buffalo Bill was not released before May ’65. It was a beautifully made, grandiose movie. It also did well at the box-office, but it had arrived second, not first, and therefore never got the praise it deserved (…) Leone was not the great director many people thought he was. He was lucky and his luck simply continued.” (2).

Most of this is nonsense. To begin with, Leone’s first Dollar movie wasn’t the first Italian western. But there's more: If filming had started in march ’63, and the film was only released in May ’65, Costa would have lost more than 6 months for some reason. Forum member Jonathan Corbett thinks filming started in March ’64 instead of ’63. This seems to make sense. Costa’s differences with the producers were about filming locations. Costa didn’t like the idea of travelling to ex-Yugoslavia for some outdoor scenes (such as the Indian attack on the fort), but apparently yielded to the pressure. But why did he lose so much time with it? The indoor and town scenes were shot in the Elios studios, probably in the fall of ‘64. Filming schedules were quite tight as far as the Roamn studios were concerned, and it looks like Costa had lost his place in the queue (3). He had lost some of his crew members too: Leone had hired both Mario Brega and cinematographer Massimo Dallamano for A Fistful of Dollars, and this seems to have caused a lot of frustration. Costa's movie is predictable and even lacks the charm of the average sauerkraut western. For a friend of all red men, Buffalo Bill kills an awful lot of Indians. Dallamano’s cinematography is excellent. The best jokes come from the dubbing department : some of the Indians speak with British accents. 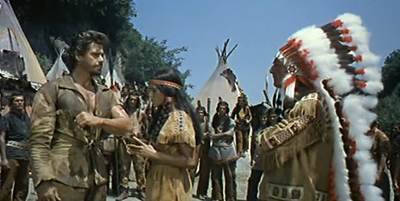 And then the famous punch that broke Scott’s nose. There a various versions of the incident. According to Brega (credited as Richard Stuyvesant) Scott and he didn’t get along very well and eventually came to blows. Others, like assistant-director Gianfranco Baldanello think the fateful blow wasn’t launched during a quarrel, but simply while filming the fistfight in the saloon. Brega had misunderstood an instruction, and instead of blocking a punch, he launched one himself … (4).

Simon Gelten is a long time contributor to the SWDb. "I'm not as old as Tom B. but I'm working on it. I hope to catch up with him by the end of the next decade.", he says. Simon saw all movies by Sergio Leone and several by Sergio Corbucci in cinema, most of the time in Eindhoven, the city where he was born. Currently, Simon is living in Turnhout, Belgium. Simon is active within the database as both Scherpschutter and his alter ego Tiratore Scelto.
Retrieved from "https://www.spaghetti-western.net/index.php?title=Buffalo_Bill,_Hero_of_the_Far_West_Review&oldid=113947"
Categories:
Cookies help us deliver our services. By using our services, you agree to our use of cookies.