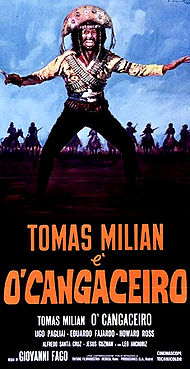 Brazil, the 1920s. The sadistic colonel Minas massacres the hometown of a famous cangaceiro (a kind of revolutionary bandit). The only survivor is a young farmer called Espedito; he is nursed back to health by a (crazy?) hermit who thinks he has been sent (= espedito) by God and therefore baptizes him the Redeemer. Espedito/The Redeemer forms his own gang of cangaceiros but doesn’t really understand what he’s doing until he befriends the proverbial European intellectual, a Dutch Oil prospector, who introduces him to important people. Espedito is hired (and of course double-crossed) by the Dutchman and a corrupt local governor, but then the Dutchman changes sides …

Set in Brazil, and with its unusual score and costume design (both inspired by local traditions and a Brazilian movie from ’53 of the same name), O’ Cangaceiro seems a side-slip of the genre, but the film has (nearly) all distinctive elements of a Zapata western. It’s very violent, often funny, stunningly photographed by Alejandro Ulloa, and offers one of Milian’s most outrageous performances (if you like the man you will like the performance, if you don’t, you won’t), still something seems to be missing. There’s no real chemistry between the two protagonists and despite exuberant details like American-Italian gangsters with Tommy-guns (hired to kill the cangaceiro), the script lacks momentum. O’ Cangaceiro is a beautifully looking, interesting, but somewhat flawed spaghetti experience. – Scherpschutter

Retrieved from "https://www.spaghetti-western.net/index.php?title=Cangaçeiro,_O%27&oldid=128397"
Categories:
Cookies help us deliver our services. By using our services, you agree to our use of cookies.