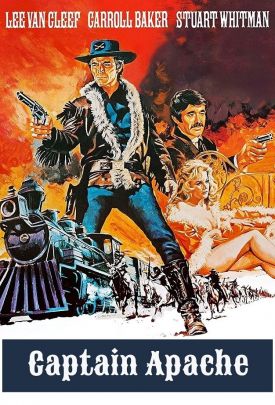 In 1971 the spaghetti western was over its peak, but Lee Van Cleef was still busy trying to convert his fame into hard cash, making more westerns than ever, on both sides of the ocean. Captain Apache was a British-Spanish coproduction, filmed in Spain, scripted and directed by Americans, and starring actors from all over the world. Lee is wearing one of the most ridiculous wigs in history and is also singing two songs. Excuse me: singing? Well, he only sings one of them - in a style that could be described as Johnny Crash (*1) - the second one, the title song, is a sort of slow rap, Lee reading the words instead of singing them.

The title character is a US army Captain of Native American descent who is asked to investigate the murder of an Indian agent. His only clue is "April morning", the last words spoken by the victim. Lots of people seem to know more about this morning, but they are all shot before they're able to talk. With the lead character investigating a murder and uncovering an intricate scheme of corruption, the film often feels like a detective story in a western setting. The source material (a novel by S.E. Whitman, published in 1965) has a lot in common with the kind of conspiracy thrillers that were popular in the late sixties, early seventies, offering a mix of social comment and paranoia, often with vague references to the Kennedy killings.

Captain Apache is a movie with an ultra-bad reputation, and no, it's not good, but it might be enjoyable when watched with low expectations. The plot involves a corrupt business man, a shady lady, a couple of homosexual gunmen, Mexicans dressed like Indians, a president, his double, you name it. The only thing missing, is Lee's moustache (it's a well-known fact that Native Americans don't have much facial hair). There's a lot of wild humor - some intentional, some unintentional (*2) - and a truly outrageous sequence of Van Cleef having a bad trip after a medicine woman has administered him a brew of hallucinogens. This is obviously a sign of the times as well: in those days, it was often thought that drug-induced techniques led to altered states of consciousness and that interrogating a hallucinating witness could provide investigators with viable information (*3).

Van Cleef looks a bit weird with his wig and without his moustache, but he works himself bravely through the labyrinth plot. Stuart Whitman and Carroll Baker make surprise appearances as the shady business man and the seductive saloon lady. We see a lot of familiar spaghetti western faces in minor roles, but we never get the idea that we’re in a spaghetti western; there’s only one scene (involving a blind guitar player) that seems to have some genuine spaghetti western atmosphere. The director, Alexander Singer, was a man who had exclusively worked for television but who apparently also was a good friend of Stanley Kubrick (*4). The film is shot by John Cabrera, who also did the cinematography of A Man called Noon, but his trademark use of odd camera angles is less obtrusive here. Both Philip Yordan and Milton Sperling were experienced screenwriters and you wonder if they had tasted a few mushrooms too before writing the script. 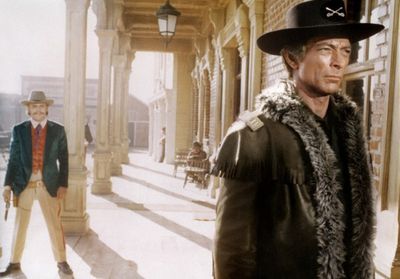 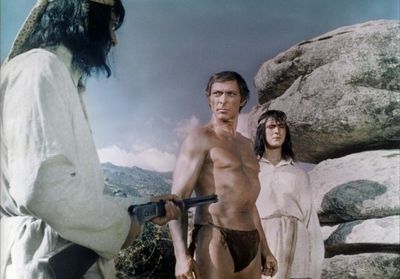 Simon Gelten is a long time contributor to the SWDb. "I'm not as old as Tom B. but I'm working on it. I hope to catch up with him by the end of the next decade.", he says. Simon saw all movies by Sergio Leone and several by Sergio Corbucci in cinema, most of the time in Eindhoven, the city where he was born. Currently, Simon is living in Turnhout, Belgium. Simon is active within the database as both Scherpschutter and his alter ego Tiratore Scelto.
Retrieved from "https://www.spaghetti-western.net/index.php?title=Captain_Apache_Review&oldid=130724"
Categories:
Cookies help us deliver our services. By using our services, you agree to our use of cookies.