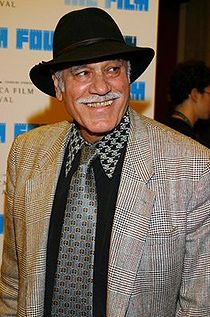 Spanish supporting and occasional leading actor Aldo Sambrell is primarily associated with spaghetti Westerns of the '60s. In those films, he generally played a gunslinger. He was born Alfredo Sanchez Brell but over the course of his career he used the following names: Aldo Brell, Alfred S. Brell, Aldo San Brell, Aldo Sanbrel, and Aldo Sanbrell. He made his directorial debut as Alfred S. Brell with La Ultima Jugada (1974). Sambrell produced his first film, Hammam, in 1997.

The following 66 pages are in this category, out of 66 total.

Retrieved from "https://www.spaghetti-western.net/index.php?title=Category:Aldo_Sambrell&oldid=99950"
Category:
Cookies help us deliver our services. By using our services, you agree to our use of cookies.