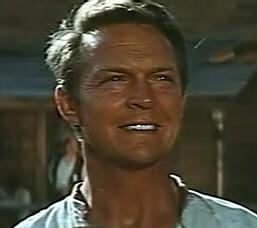 On stage from the age of 19, American actor Alex Nicol toiled away in supporting roles for nearly a decade, his Actors Studio training often serving him well in helping him make something out of nothing. Nicol enjoyed a good run in the 1949 Broadway smash South Pacific, albeit in a role consisting of no more than four lines. Things perked up when he made his first film, The Sleeping City, in 1950, after which Nicol concentrated upon movie parts calling for shifty villainy. He worked in both Hollywood and England, with time out for TV assignments, including an oddly delineated role as a grown-up Mamma's boy on the 1962 Twilight Zone episode "Young Man's Fancy." Nicol had accrued enough capital in the late '50s to begin directing as well as starring in films. Some of his projects were tawdry little items like The Screaming Skull (1958), but at least one Nicol-directed film, And Then There Were Three (1962), proved that a singular talent had been wasted in Hollywood. And Then There Were Three, a no-budget war film, scored on its grittiness and spontaneity; unfortunately the film was not given a general release, and began circulating only when sold to television in 1965. Alex Nicol added to his directing credits by helming a few network TV series in the '60s, often through the auspices of Universal, his home studio as an actor in the '50s.

Retrieved from "https://www.spaghetti-western.net/index.php?title=Category:Alex_Nicol&oldid=15621"
Category:
Cookies help us deliver our services. By using our services, you agree to our use of cookies.