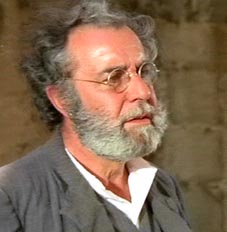 An architecture student, Fernando Rey interrupted his studies to fight in the Spanish Civil War against the Frangiste. He entered films as an extra in 1940. Resembling a Goya painting come to life, the cadaverous Rey is best remembered internationally for his appearances in such Luis Bunuel projects as Viridiana (1961), The Discreet Charm of the Bourgeoisie (1972), That Obscure Object of Desire (1977), and for his work in such costume epics as The Last Days of Pompeii (1960), The Castillians (1961), and the made-for-TV Jesus of Nazareth. In 1977, he won a Cannes Film Festival award for his work in Elisa Vida Mia. Often cast as a world-weary, cosmopolitan villain, Fernando Rey's most celebrated performance within this character range was as drug lord Alain Charnier in the two French Connection pictures of the 1970s.

The following 17 pages are in this category, out of 17 total.

Retrieved from "https://www.spaghetti-western.net/index.php?title=Category:Fernando_Rey&oldid=20708"
Category:
Cookies help us deliver our services. By using our services, you agree to our use of cookies.