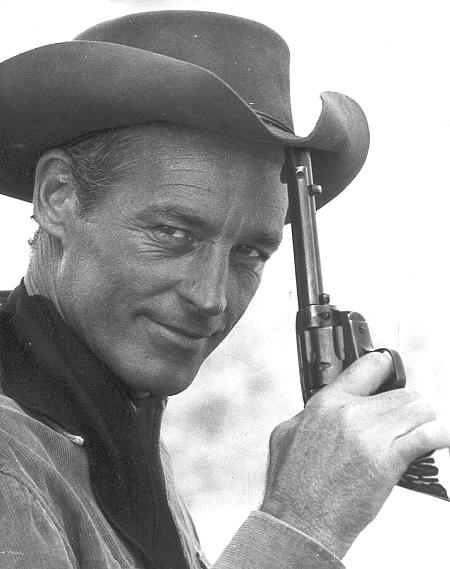 Ex-telephone lineman Guy Madison was serving his country in the Navy at the time he made his screen debut as an extra in David Selznick's Since You Went Away (1944). After the war, Madison was signed by RKO, where he was given the star buildup in such films as Till the End of Time (1946) and Honeymoon (1947). Unpleasant publicity surrounding his stormy marriage to actress Gail Russell very nearly put an end to Madison's burgeoning career. Salvation came in the form of a syndicated TV series, Wild Bill Hickok, which starred Madison in the title role and which ran from 1951 through 1958. Thanks to his Hickok popularity, Madison was able to secure major roles in such "A" pictures as The Charge at Feather River (1953) and On the Threshold of Space (1956). After the cancellation of Wild Bill Hickok in 1958, Guy Madison's star faded somewhat, though he went on to make a good living as a leading man in German and Italian westerns and swashbucklers of the 1960s.

The following 12 pages are in this category, out of 12 total.

Retrieved from "https://www.spaghetti-western.net/index.php?title=Category:Guy_Madison&oldid=123526"
Category:
Cookies help us deliver our services. By using our services, you agree to our use of cookies.