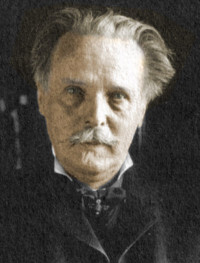 Karl Friedrich May was maybe the most popular adventure story writer in Germany. He was born in Ernsttahl in 1842. In 1912 he died due to a cold in Radebeul, where his grave still exists. But his novels are not only used for making movies, but for creating tv series or plays. These plays are typical for the region of Dresden and Radebeul in the east of Germany. Other specials are the annual Karl-May-pageants in Elspe, Bad Segeberg and Radebeul.

All movies mentioned beneath are based on his great novels, mostly dealing with the characters of Winnetou and Karl May's alter ego Old Shatterhand (although Old Shatterhand - Kara Ben Nemsi in his Orient adventures - is his "wanna-be" alter ego, while Sam Hawkens is the character that might resemble himself most).

Karl May is so important when talking about European Western, because especially in Germany, the way the Wild West (and Indians) are portraied in his novels and the films, is usually the way Europeans have pictured it to be for a very long time. Especially the idealization through his Winnetou character.

Karl May on DVD:
You can get all the great films after his novels on excellent remastered DVDs in Boxes from amazon.de, most of them come with English audio options! You find links to the respective box on the respective movie page.

Pages in category "Karl May"

The following 19 pages are in this category, out of 19 total.