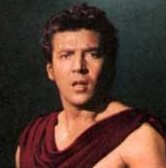 Though best remembered today as the spouse of Jayne Mansfield, Hungarian-born bodybuilder Mickey Hargitay also enjoyed a career as an actor both in the United States and Europe during the late '60s and early '70s. Born Miklos Hargitay in 1926, he left his native Budapest after World War II and emigrated to the United States, where he performed as an adagio dancer and also owned his own construction business. He became interested in professional bodybuilding in the mid-'50s, and eventually won the Mr. Universe title in 1955. He then joined Mae West's stage show, where he met and fell in love with Mansfield. The pair was married in 1957, the same year that Hargitay made his motion-picture debut in Slaughter on Tenth Avenue. He would co-star with Mansfield three times -- in Will Success Spoil Rock Hunter? (1958), The Loves of Hercules (1960) (in which he played the title role), and in Promises! Promises! -- before the couple divorced in 1964. Hargitay's subsequent roles were primarily in Italian productions; the most notable of these was 1965's Bloody Pit of Horror, in which he played a crazed nobleman possessed by the sadistic spirit of his ancestor. Hargitay also appeared in several Italian Westerns and spy films before wrapping up his acting career in a trio of horror films -- Lady Frankenstein (1971), the perverse The Reincarnation of Isabel, and Delirium (both 1972). Hargitay remarried in 1973 and found a second fortune in real estate. Hargitay later became the president of Graphic Muscle, an internet site devoted to bodybuilding, and the proud father of five children, one of whom, Mariska Hargitay, achieved her own success in Hollywood.