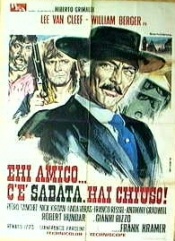 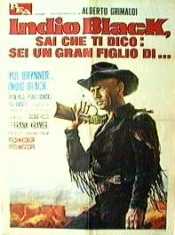 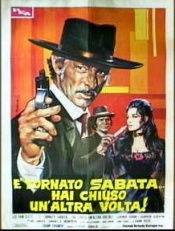 The Sabata Trilogy is a series of Spaghetti Western films released in 1969 and 1971, directed by Gianfranco Parolini, and starring Lee Van Cleef in the first, Sabata, Yul Brynner in the second, Adiós, Sabata, and Van Cleef returning for the third, Return of Sabata.

Lee Van Cleef stars as a mostly silent, loner gunman who foils a plan by some leaders of a small Texas town to rob their own bank and sell the town to the railroad. William Berger co-stars as Banjo, an opposing gunman.

With Yul Brynner cast in the lead role, this film was originally going to be entitled Indio Black, but the title was changed after the first Sabata film proved successful and had inspired many imitators. Ironically, Lee Van Cleef, star of the first Sabata film had been offered the role, but had to decline because he was committed to The Magnificent Seven Ride in the role of Chris Adams, which Brynner had made famous in The Magnificent Seven. Adiós, Sabata is set in Mexico under the rule of Emperor Maximilian I, and Sabata is hired to steal a wagonload of gold from the Austrian army.

Lee Van Cleef returns to the role of Sabata, who goes to a small Texas town and seeks revenge on a robber baron, determined to steal back some money that the man had stolen from him.

As was common with successful Spaghetti Western franchises, such as the Dollars Trilogy or Django, several other Sabata imitators were released. These included Wanted Sabata, directed by Roberto Mauri and starring Brad Harris, and Arriva Sabata!, directed by Tulio Demicheli, and starring Peter Lee Lawrence, which were made in 1970. Watch Out Gringo! Sabata Will Return, was made in 1972, directed by Alfonso Balcázar and Pedro Luis Ramà­rez and starring actor George Martin. None of these are considered part of the "official" series.