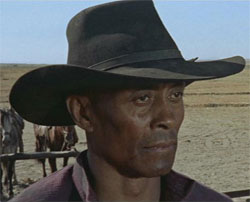 At 6' 4", Woody Strode made an impact in westerns and other action movies, and is considered one of the most important African-American film actors of his day.

Born Woodrow Wilson Woolwine Strode on July 28, 1914 in Los Angeles, he was a track star (decathlon) and football player at UCLA, and was one of the first black players in the National Football League. He also played in the Canadian Football League and was a pro wrestler.

He got into acting in 1941. He was in The Ten Commandments and in Spartacus (one of his most memorable roles, fighting Kirk Douglas with a trident). A close friend of director John Ford, Woody starred in Sergeant Rutledge, and had roles in two other Ford westerns, The Man Who Shot Liberty Valance and Two Rode Together. He was also in The Professionals with Burt Lancaster, Lee Marvin, Jack Palance and Claudia Cardinale.

Woody played a gunslinger in Once Upon a Time in the West, and had memorable roles in Keoma and The Unholy Four.

His last film was The Quick and the Dead, directed by Sam Raimi. Woody died of lung cancer on December 31, 1994, in Glendora, California. He is buried at Riverside National Cemetery.

The following 11 pages are in this category, out of 11 total.