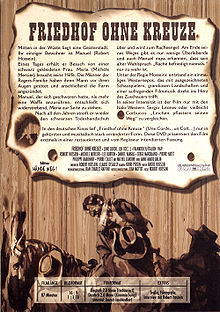 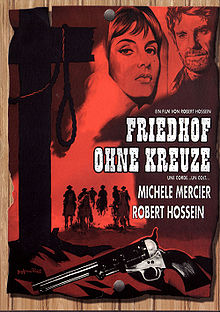 The Rogers family succeeds in bringing the Caine ranch to an end, they hunt down Ben (Benito Steffanelli) and hang him in front of his wife Maria's eyes. Left only with Ben's share of a retribution-type endeavor of her brothers-in-law, Maria (Michele Mercier) turns to an old friend, Manuel (Robert Hossein), to take revenge. At first reluctantly, but then with stoic professionalism, Manuel infiltrates the Rogers ranch. Maria's plan to kidnap Mr Roger's daughter Joanna succeeds, but although she can blackmail the Rogers into giving her dead husband a last honorable burial, Ben's brothers screw up the hostage return and lose their life. With the plan gone awry, and Maria being killed, Manuel is faced with confronting the Rogers, and for the "corde", they will face death by the "colt"....

Cemetery without Crosses is one of the most popular Spaghetti Westerns. Although tastes are different, it is mostly - at least I am certain - because with this film, Robert Hossein created a wonderfully sinister, serious and atmospheric movie, opposed to the way too many lighthearted and less serious representatives of the genre. Cemetery Without Crosses offers a gripping melancholic story, absolutely moody music by Hossein's father, editing and cinematography in stylish finesse and a cast of actors who manage to transmit the story very convincingly. It is definitely a shame that this film remains Hossein's only adventure into this genre, just imagine what else he would've been able to create! The movie convinces most of all through his stereotypical Spaghetti Western moments. Long scenes free of dialogue or showdowns, atmospheric landscapes, silent anti-heroes and failed romances. Death awaits around the corner, life is not worth more than a bullet. Hossein produced not only a very sinister and moody film, but also a very minimalist one, and this to-the-point-ness is it - consider the film's running time - that probably emphasizes even more the film's emotional impact. An absolutely A grade film, that is in most top lists for a reason.

The small German underground label Buoi Omega (Anolis is the Distributor) finally releases this cult movie in acceptable quality but way overpriced and as a hard to get limited collector's item. That is unfortunate, as this policy likely excludes a huge share of the target audience.

The DVD is within a nice wooden case, which is way fancier than your average case. There is a German booklet by Mr Kessler who talks a little bit about the film, and by the responsible audio engineer who talks about the restoration process for the German audio track. Because the German distributor (back then) dared to completely change the film's audio track and cut the film down, they had to go out of their way to use third-party material for restoring the originally intended audio as far as possible. For comparison, they have included the "raped" audio track on the DVD. The other language tracks are not impacted by the distributor's manipulation.

The Picture is available in anamorphic widescreen and looks far better than the atrocious TV version I remember. Although the material is mostly lacking sharpness and offers little detail, the contrast is alright mostly. The transfer can not be described as digitally restored in the modern sense that you might know from expensively restored DVDs available from other publishers, but it looks fair enough even for bigger screens and will elicit joyful sounds from Spaghetti Western admirers. Print damage and scratches, so be it (the quality of the Japanese DVD is unknown to me), this DVD offers more than acceptable quality of a long-awaited film.

The Sound (I tested the restored German version) is dynamic, stereo and mostly free of disturbances. Although the sound effects partially sound a bit obviously restored, but all in all a nice job that does not leave much room for criticism, if you consider the source material. I switched back and forth every now and then but could not notice grave differences, aside from the restorations that were made related to the content and arrangements (see booklet). The other language tracks sound acceptable but I have no idea whether they have undergone restoration as well, the new German track sounds best among the 3. 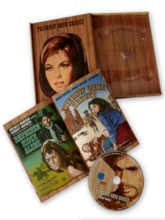 Still one of the very best representatives of the genre, Cemetery without Crosses holds up as a very moody and sinister/depressive film (especially in its original version) and will satisfy every spaghetti western fan looking for serious and gritty gems. Hossein's unfortunately only singular effort in the genre is a must-see, a must-own and a must-love. I enjoyed watching this again and I think I will love it even more after watching it again after checking out some of the DVD's special features. Speaking of which... this over-priced, and under-stocked German DVD restores the films uncut version, offers restored German audio (the original German theatrical audio tracks were horrible mutilated and modified) and a wide range of neat extras, all that in a wood-type packaging that makes it a well-sought collector's item. Although the picture and sound quality of the disc will not knock you off your feet, it is a remarkable effort by a tiny little film club turned dvd producer.

For some reason I wrote a different verdict, as well.

Although I do not approve of the release policy of the Buoi Omega film club, they definitely did good work here. Cemetery without Crosses is a long-awaited film which - thanks to the restoration work - is now available in worth-a-purchase quality, with some good collector's edition extras on top of that. Video and Audio cannot hide their age here, and the restoration work is surely not up to those done by some other labels. I am unfortunately not able to compare this to the japanese disc. Picture and sound are definitely of satisfactory quality though. All three language tracks are fit for your stereo system, and the transfer looks decent even on bigger screens. Cemetery Without Crosses belongs among the best the genre has to offer, and it was about time fans got this one on DVD. Buoi Omega delivered, and that in laudable form. A recommended purchase for those who don't mind the steep price. The DVD offers three audio options, so the disc could be a hit export too.