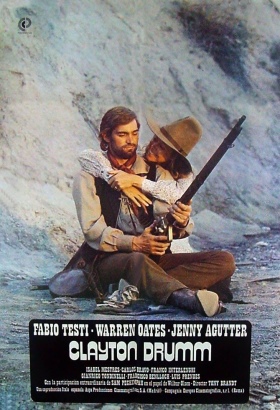 A condemned gunman, Clayton Drumm, is given a chance at freedom and salvation if he accepts a proposition presented to him by the railroad. Kill farmer, Matthew Sebanek. But after Drumm is disarmed at Sebanek's ranch, he soon develops a liking for the man. But Sebanek's wife, Catherine, is drawn to him and they fall in love. Sebanek finds out, Drumm flees, and Sebanek beats his wife in a fury. The two lovers go on together after Catherine believes she has killed her husband. But she hasn't. And the railroad hasn't forgotten either.

China 9, Liberty 37 is definitely a strange western. It was made in 1978 which turned out so few westerns, that they could be counted on one hand. But it also is strange on account of the fact that the film is some sort of amalgamation of different styles. It is technically a Spaghetti Western and does bear several aspects and similarities with the tried and true Italian Western but it has a strong US involvement. Both in the production side and the style and feel of the film.

One aspect that helps the film is the strong character developement. You feel more attached to the characters and they are all given so many different aspects, that it is hard to tell who is the real good guy. But in truth, they are all good guys in that they are the heroes of the film. Clayton Drumm is an interesting character in that he is in reality, a cold killer and womanizing outlaw. But his tender side is deeply explored in the film in both his friendship with Matthew and his love of Catherine. But not only does he sleep with his only friend's wife, but once he is separated from her, he shows little pause in paying visits to prostitutes. Matthew is the just hero. He is a man who is looking for his wife who ran out on him. He treats her good, gives her a home, but is shunned by her. But his dark side is shown in his beating of his wife. Even if his provocation is just. So all in all, the characters are a perfect example of the combination of Spaghetti Western anti-heroes, and white hatted American heroes. 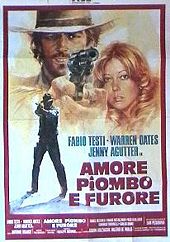 The film is created with a strong sense of both atmosphere and style. Being made in such a late period, the film uses themes regarding the end of the west and coming of the railroad to reflect on the state of the western genre. Declining and in a very sad state. Therefore, the film is quite sad. It bears some similarities with the Twilight Spaghetti Westerns in the end of both west and western, but also in its melancholy tone and somewhat in the score. It is not sad in a depressing sort of way as in sad because that is how it is supposed to feel. But sad because of the end of the west and for fans of the western, this is hard to accept. Also the destruction of a happy family can be seen as quite sad. A happy husband and wife have their lives changed forever. This is the melancholy in China 9, Liberty 37. But the style is in large part, the reason for the atmosphere. It is paced rather slowly and lots of time is given to character development. This is an attribute that is seen somewhat more often in the American Westerns more so than in Italian Westerns. So this factor definitely contributes to the American feel. But the overall style of the film seems to be best summarized in the statement that this film is an amalgamation of styles between Italian and American. So both flashy Italian, and Classic American.

When one is reviewing a film such as this, one must consider the two production companies at work on this film. In this case, mainly Italian and American. So as I have clearly stated, this film shows brilliance in both styles. To start with the Italians. The film was shot in Spain and has a crew made up mostly of Italians and Spaniards. So it is obvious that the filmmakers had some kind of Spaghetti Western in mind and the film has this feel at times but is not constant. Certain scenes are gifted by this feel. One example of the Italian influence is possibly the scene where Drumm is released from jail and he suits up for this killing he is employed to do. He gets his gun and a leather guard for protecting his hand from fanning his gun. This could represent the gung ho approach Spaghetti Westerns had towards violence. Taking all the deadly serious tone some Classic American Westerns had. The killing in this film in general has a more Spaghetti feel to it. The anti-hero is quick to react and inhumanly skilled with firearms. He spins around and fires at his opponents with deadly timing and precision that only Italian Western anti-heroes possess.

Now the American side. It was directed by an American director, Monte Hellman, who was no stranger to the western but was indeed a stranger to the normal western. This is also not a mainstream western. But with its Italian influences, come equal American influences. The characters often engage in conversations about the past. Their pasts. This reminiscence is commonplace is several 60's and 70's American westerns. But the Italians were too busy slapping each other around to worry about the state of the Western. The story itself is more suited for an American type western than a Spaghetti Western. But one major hint at the film's American background is the cameo appearance of American director, Sam Peckinpah, whose own westerns have a very similar feel to this film. But both the Italian and American influences are both so well disguised because this film is really its own. It does not strictly follow any of these two genre guidelines. It is simply its own film with influences from both Italy and America.

One theme the film incorporates is the theme of the showbiz west. Clayton and Catherine visit a circus sideshow after their escape from the Sebanek ranch. They watch the show while taking sips from a magic elixir that cures what ails ya'. Cocaine. The inclusion of Cocaine is interestingly historically accurate and not seen in most westerns. This perhaps can be seen as an included aspect to the end of the west theme. Another aspect for the showbiz is the dime novelist who wishes to buy the life story of Clayton Drumm to sell a piece of the west to the people in the East. This whole theme sits rather oddly with the rest of the film and seems unrelated no matter how interesting it is.

The film was directed by American cult film director Monte Hellman. Hellman had directed two westerns previously. Both are known for their allegorical messages and drug overtones. They have been labelled acid westerns. But this film is decidedly different. It is less allegorical. Or at least less mysterious. Hellman's direction is very balanced. He balances character development, romance, and action all pretty evenly but his main focus is on the characters and not on action. This makes some of the action scenes feel somewhat thrown in. There have been certain prints of the film, mostly in Europe, claimng Hellman co-directed this film with Antonio Brandt. Who was in reality, or at least commonly believed to be the assistant director. His name was possibly added to European prints to give the Europeans a familiar name. Or at least a European sounding name. Of special interest, famed Spaghetti autuer, Sergio Leone showed up on set. His involvment is unknown to me and is most likely nonexistent.

The acting is very good. I have to say this since I am one of the fans of the great underrated character actor, Warren Oates, who makes his only Euro Western appearance with this film. Fabio Testi is not dubbed in this film nor are most of the lead actors. It is refreshing to here his real voice which sounds strikingly similar to Franco Nero's voice. The fact that you can actually hear his voice is something pretty cool for a Spaghetti fan. But since he is not speaking in his native tongue, he is most likely less expressive than normal which does slightly taint his otherwise good performance. Jenny Agutter is not a very good actress judging by this film. She seems like she is in a trancelike state throughout most of the film and may only be there for her beauty. Which is displayed explicitly. Sam Peckinpah makes a cameo appearance as dime novelist Wilbur Olsen. Peckinpah played the role as a favor to Hellman who exclaimed, "Damn boy! I didn't know you could act!" His appearance is appropriately slimey for how he is portrayed.

The music by Pino Donaggio is quite shrill sounding but is haunting none the less. It certainly is an acquired taste. The main theme begins with blasts of stinging harmonica's followed by a country western guitar riff. It goes along and develops into a mournful tune to match the tone of the film. The end song is sung with a female vocalist and is also something of a mournful rock song that resembles the soundtrack to Pat Garrett and Billy the Kid.

Westerns were dead by 1978 but some stubborn holdouts rode on. This film is one of the best westerns of the late 70's. But it doesn't have much to compete against. It is a great fusion between Italian westerns and American westerns. Bearing the best aspects of both to create something of its own. China 9, Liberty 37.

Retrieved from "https://www.spaghetti-western.net/index.php?title=China_9,_Liberty_37_Review&oldid=48123"
Category:
Cookies help us deliver our services. By using our services, you agree to our use of cookies.