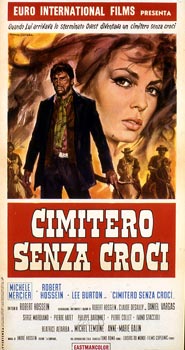 Ruthlessly pursued by the Rogers family following a dispute over cattle, Ben Caine (Benito Stefanelli) is chased back to the Caine Ranch. Despite his wife Maria's (Michèle Mercier) desperate pleading, the Rogers family hangs Ben Caine, forcing Maria to watch. Consumed with revenge but finding her two brothers-in-law reluctant to assist, Maria enlists the help of Manuel (Robert Hossein). Manual, presumably preoccupied with the past, wears a single black glove and lives alone in a ghost town. Manuel agrees to Maria's plan with reluctance, in part because of his deep feelings/attraction to her. Manuel finds employment as foreman at the Rogers' ranch and surreptitiously kidnaps Pa Rogers' (Daniele Vargas) only daughter Johanna (Anne-Marie Balin). With Johanna as the bait, Maria will be in the perfect position to exact her revenge on the Rogers but things don't turn out quite as planned.--The Halitosis Kid 10:21, 26 February 2007 (CET