Cinemas of your Hometown - Eindhoven 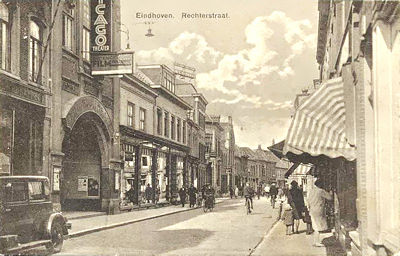 Chicago was the most fashionable cinema of Eindhoven. Most blockbusters premiered here. The cinema was build in 1913 but renovated several times; the most important renovation took place in 1945, immediately after the war, when the theatre got a new façade, a very high one without windows. This façade was used as some kind of giant advertising pillar. On the other side of the shopping street was a warehouse with a restaurant on the third or fourth floor. Once they had attached a gigantic 007 to the façade and from my seat near the window I looked him right in the eye. The name of the movie was written (in Dutch) above his head: You only live Twice. I asked my mother what this was supposed to mean. Did you live twice? Only twice? She had no idea. Remarkably, the theatre was composed of two separate buildings, one with the ticket office and the entrance hall, and another where the films were actually shown; they were connected by a long corridor with a foyer, a small bar and a series of show windows with info on films that were expected to be on the program soon. Walking through this beautiful corridor gave you the idea you were part of the beau monde. It had 833 (very comfortable) seats. It wasn’t the largest cinema in town, nor was the one with the largest screen. But it was the first cinema in Holland with stereo sound (guess why) and until 1980, when the second building (where the films where shown) was completely destroyed in a fire, it was known as one of Holland’s finest cinemas and the one with the best sound. Westerns were a rarity in the Chicago Theatre, still I saw my first western here: Mackenna’s Gold. I guess it was during a Christmas or Easter holiday, since the cinema was loaded with boys of my age, and a Titanic scale agitation broke out when Julie Newmar took off her clothes and jumped into the water. I also saw my first spaghetti western in this theatre, the chopped-up version of Once upon a Time in the West. 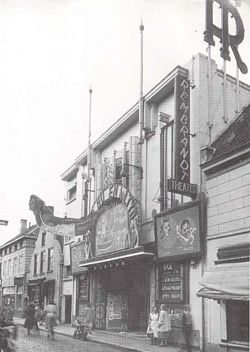 The Rembrandt theatre was, so to speak, the direct opposite of the Chicago theatre: the most ‘popular’ cinema of Eindhoven. It was also the largest: it had 1300 seats, but they were far less comfortable than the seats in Chicago. Still it always felt good to watch a movie here. There were no attendants telling you to be quiet or to put out your cigarette. Not that I ever smoked, a true fan won’t ever do that in cinema, but you really had the idea everybody was welcome here. I saw Return of Ringo, my second spaghetti western, and For a Few Dollars More in this theatre, along with several other spaghetti and non-spaghetti westerns. The cinema was known for their rather flashy painted boards above the entrance, showing scenes of the movie. I remember Death rides a Horse was shown here, and when I close my eyes I still see the enormous painting with the Dutch title ‘De Dood kwam te Paard’, which sounded, like the English title, quite bizarre, but was therefore the most beautiful title of a movie I had ever heard of. The problem was I wasn’t allowed to see it: it had an ’18 rating’ and I was only thirteen or fourteen years old. In 1960 the owner bought the adjacent premises (the building right of the theatre on the photo) for a second cinema. This cinema was smaller but offered more comfort, and was called ‘Select’. It was intended for art house movies and European (mainly Italian and French) mainstream cinema, but occasionally a western was shown here. I saw both The Wild Bunch and The Mercenary in the Select theatre in the early seventies (both must have been reruns because I was too young for them when they were first released), and the uncut version of Once upon a Time in the West was also shown for the first time in Eindhoven in this theatre. Both Rembrandt and Select were transformed in a multiplex cinema in the mid-seventies. This complex was closed down thirty years later and replaced by apartment building. The world is falling apart. 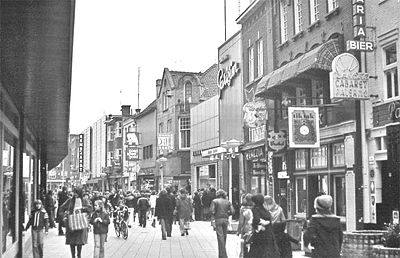 Like the Select theatre, this Dutch Cinema with a French name (it means ‘Parisian Cinema’) was intended for commercially less interesting films, but it was used for this purpose only for a brief period and soon became a typical ‘popular cinema’, which exclusively programmed comedies and action movies. In spite of all this it still had attendants in uniform who showed you to your place and became very angry when someone dared to take another (more expensive) seat after the film had started. It was in this cinema that I witnessed how the operator stopped the movie because one of the visitors refused to put his cigarette out. I think the movie was A Few Dollars for Django, but I’m not sure. I remember the incident better than the movie. I saw only a handful of spaghettis in this theatre during their regular program, but among them are Vamos a Matar, Compañeros (my first Corbucci) and The Good, the Bad and the Ugly. Still this is the theatre I identify most with the genre because of their midnight showings of spaghetti westerns in the 70s. I must have seen more than twenty spaghettis during these showings, which also offered me the chance to pick up movies I wasn’t allowed to see ten years before, such as Death rides a Horse. There were nearly always a few drunks in the audience, and occasionally the atmosphere was as heated among them as it was on the screen. Cinema Parisien was rather small, it had only 350 seats. On the photo you can see the façade in the middle on the right, somewhere between the elephant (a toyshop) and Tik Tak (a bar). The photo was taken in 1977. When you look left of 'the elephant', you can spot the modern multiplex Rembrandt building, openened shortly before. Cinema Parisien was one of the last ancient cinemas that resisted the modern plague: like many old timers it was renovated in the 70s (the number of seats was brought back to 271) but while other cinemas underwent a complete metamorphosis, Cinema Parisien more or less kept his old classic style. It was finally closed in 1998. 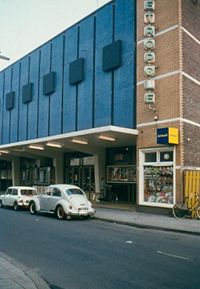 The Metropole theatre belonged to a different, family-owned corporation, the City group. They owned three cinemas: Plaza (blue movies), Studio M (arthouse) and Metropole, their largest theatre, always struggling to rival Chicago, and never really successful in that aspect: people simply seemed to prefer Chicago to Metropole, probably because it was located in a more inviting part of town. Metropole was located near the train station, where the town centre virtually ended. The small shop next to the cinema (on the right, under the Telegraaf publicity sign) was a sex shop, which also might have hurt the cinema’s prestige. The Metrople theatre had 1194 seats, had the largest wall-to-wall screen in town, and boasted with a sound system that was told to be more powerful than the prestigious sound system of the Chicago theatre. It was definitely louder. Watching a movie in Metropole was quite an experience. In the seventies they were on the national News when a few lamps were vibrated loose during the showing of the sensurround movie Earthquake (luckily it wasn’t a very popular movie, so nobody was hurt). Metropole showed a variety of movies, ranging from mainstream European cinema to Hollywood classics and action movies. My first experience with the loudness of the theatre was Spartacus. I saw two Leone movies here: A Fistful of Dollars and (on another rerun) Once Upon a Time in the West. I also saw (on yet another rerun) The Wild Bunch in all it’s thunderous wall-to-wall bloody glory. The Metropole was build in 1958 (previously the Otten family had owned another cinema, called City, hence the name of the corporation) and closed its doors in 1986, but the building was only demolished in 1993. Today a modern multiplex building called Pathé has taken its place. A few years ago I watched Once upon a Time in the West in one of their cinemas on a Tuesday night.

Retrieved from "https://www.spaghetti-western.net/index.php?title=Cinemas_of_your_Hometown_-_Eindhoven&oldid=100820"
Category:
Cookies help us deliver our services. By using our services, you agree to our use of cookies.