Cinemas of your Hometown - Universum, Kaiserslautern

I've found a site composed of cinemas around South-West Germany. There are new multiplex buildings but also some old ones which are still busy. Most of them are gone and one of them is the Universum in Kaiserslautern : 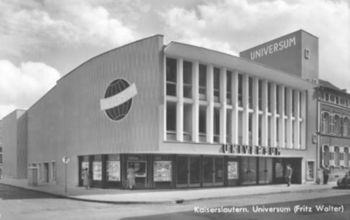 The picture was made 1960, about 4 years after it was built. The gates opened on 16.8.1956 and from this time till 1967, Fritz Walter, the famous son of the town, managed the cinema. His wife, Italia, was working at the box office.

Inside there was a 14 meter cinemascope screen and seats for nearly 1000 people. After 1967 it was managed by a big cinema company until the 80's. The downward number of visitors and missing receipts brought it slowly to the end. 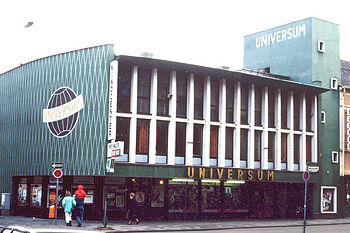 This picture was made 1988. In the early 90's the Universum was closed forever. The building still exists, but inside are only business rooms and it looks very cold. 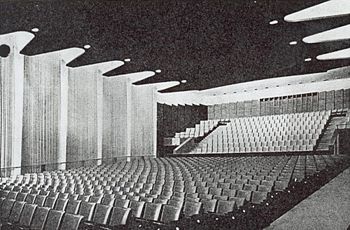 This is the interior of the Universum cinema in its original state In the back the seats took the shape of a stand; the entrance hall was located underneath The cinema was illuminated by spotlights situated above the suspending between-decks, spreading their beams of light through the serrated openings on both sides.

I first visited the Universum in the late seventies, that is after the renovation of 1977: the stand had disappeared and two cinemas with smaller screens were now located above the main screen. A small bar where you could buy drinks and snacks had taken the place of the stand. If you wanted to, you could ask the people working in the bar to come to your place. If you pushed a button a small red lamp would light up; both the button and the lamp were attached to a device at the back of each tier of seats. It was allowed to smoke in front of the large screen, but not in front of the two smaller ones. During the weekends there was a double bill at 11 pm that was very popular among moviegoers. Most of the time, the films on the program were horror movies, a very popular genre in those days.

One day Johnny Hamlet was part of one of these late night showings. When I saw the German poster ‘Django – die Totengraber warten schon’, I felt irresistibly attracted to the movie and went to the manager to ask if it was possible for me to watch it. I was fourteen or fifteen years old at the time, and the manager knew all guys of my age by sight. He told me he would make an exception for this movie, if one of my parents would accompany me. And so I visited the movie accompanied by my mother, who liked westerns. Apparently I had stored the crucifixion scene in my memory in full cinemascope format, and therefore felt a little disappointed when I saw the same scene again on the Koch Media disc, because it suddenly looked so small!

Although the cinema always had a rich variety of movies on the program, the public started to loose its interest in the course of the 80s, and in general the large cinema could only boast with a full house on Saturday afternoon, when there were special showing for children. In the next few years things went further downhill. Hardly any staff was left and for most part the electric installation was no longer functioning. In the impressive entrance hall a few historic posters told a melancholic story of days long past

FRITZ WALTER AND THE MIRACLE OF BERN

In 1954 the national soccer team of Germany won the World Cup in a remarkable final against Hungary: 3-2. It was the first of three German world titles and by far the most important. The victory was far more than just a sportive triumph. Less than ten years after WWII, it gave the young republic (Bundesrepublik Deutschland, Federal Republic of Germany ) new pride and energy and the victory is often considered to be the starting shot of Germany’s economical recovery, the so-called Wirtschaftswunder.

The victory was almost as miraculous as the recovery it heralded: the legendary Hungarian team, knick-named the Mighty Magyars was thought to be invincible and had in fact not lost a single game in four years. In group stages the Magyars had pulverized Germany 8-3, a result that had shocked the nation, even though coach Sepp Herberger had not lined up his strongest team. Actually, this was one of Herbergers tricks: the self-assured Hungarians knew very little of the German team, and Herberger knew he could only surprise them once … maybe. One thing Herberger needed for sure to beat the Magyars, was the right weather: Fritz Walter weather. His captain Fritz Walter was known to be in his element in rainy weather, and Herberger reckoned that his team would have no chance on a perfect pitch, because it offered the Magyars the opportunity to develop their technically superior game. Herberger, the sly old dog, was lucky: Sunday July 4th was a rainy day, the pitch was far from perfect, after an early 2-0 lead the Mighty Magyars underestimated their opponents … and when they woke up Germany was world champion.

Probably no other sportive victory ever had the same relevance for a nation, the players all became legends and flashes of the game have been showed on German television over and over again, usually accompanied by the life radio report by Herbert Zimmerman. Every German, even those not interested in football, is familiar with his extatic cries when Germany scored the winning goal (TOR, TOR, TOR! – goal, goal, goal!) and after the final whistle (AUS, AUS, AUS! Das Spiel ist aus, Deutschland ist Weltmeister! – OVER, OVER, OVER! The game is over, Germany is World Champion!). In 2002 German director Sönke Wortman presented his feature film 'Das Wunder von Bern', showing the events from different angles, and paralleling it with the story of a father returning back from imprisonment in Russia, who must try to reconcile with his young son, who had never met him before and quickly has become afraid of him. The son idolizes local ace Helmut ‘Boss’ Rahn, who would score the decisive goal in the 1954 final. –

Retrieved from "https://www.spaghetti-western.net/index.php?title=Cinemas_of_your_Hometown_-_Universum,_Kaiserslautern&oldid=87179"
Category:
Cookies help us deliver our services. By using our services, you agree to our use of cookies.