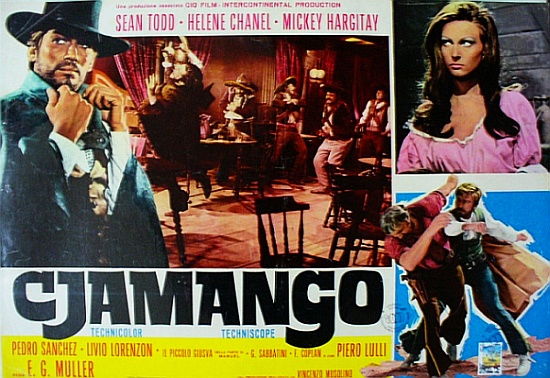 Cjamango (Ivan Rassimov) wins a pile of gold from a laughing Mexican bandit in a poker game but has his winnings instantly swiped when two more villains arrive at saloon spitting lead in all directions. Somehow surviving this ambush our hero follows the bad guys and discovers them at each others' throats after falling out over the gold. Tiger (Piero Lulli) has taken the gold for himself and Don Pablo (Livio Lorenzon) is out to get it back. Meanwhile a black clad whiskey seller (Mickey Hargitay) has also arrived whose real purpose is a mystery and Pearl (Helene Chanel), the daughter of the local drunk is carving out a precarious existence in the middle. Cjamango sets about playing one rival gang against the otherin his quest to retrieve his stolen fortune until the final and inevitable shoot out settles the matter once and for all.

Cjamango is a film seemingly made from disparate ideas from other films. The central premise of a town with two bosses and a lone outsider playing them against each other is obviously lifted straight from A Fistful of Dollars and the character of Cjamango, has more than a passing resemblance to Eastwood's Man with no Name character. Especially in the opening saloon scene where he is sporting a poncho. But there are also obvious nods to Corbucci's Django too. Rassimov's character quickly replaces the poncho with a cape and the name itself is an obvious variation on the man made immortal by Franco Nero the previous year. Fistful is also recalled in the role Pearl plays as protector of local orphan, Manuel (Giusva Fioravanti); mirroring in some ways the parts of Marisol and Jesus from that earlier film. And just for good measure, Mickey Hargitay seems to be wearing Lee Van Cleef's costume from For a Few Dollars More. All in all then, it would be fair to sum up the whole affair as derivative. It certainly is anything but groundbreaking or original but it would be wrong to dismiss it completely on those terms. There are many very good spaghettis that get most of their ideas from previous productions. It is pretty much par for the course in genre film making and always has been. Cjamango should be judged then for what it is. And, on those terms, despite a few faults, it's not half bad.

Much of the film's charm can be attributed to Ivan Rassimov. This was his first lead role, in anything as far as I can tell not just in a Spaghetti, but he carries it off with real confidence and is already exhibiting the qualities that would go on to cement him as a firm favourite among genre film fans. Rassimov does the strong, taciturn type well and is athletic enough to be convincing in an action role. It is unfortunate however, that his performance is somewhat spoiled by an illfitting english dubbed voice. Cjamango is not the first film to suffer from such a fate (Django springs to mind) but it is always a shame when an otherwise solid performance gets lessened in this way and makes you wonder who was in charge of casting the voice actors on some of these films. The guy who does the voice for Rassimov sounds about twenty years older. 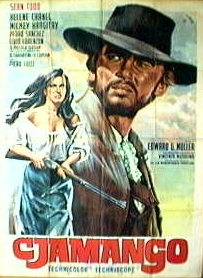 The film also benefits from a solid supporting cast with the always reliable Pierro Lulli and Livio Lorenzon delivering bad guy bravura with consumate ease and Helene Chanel providing the kind of mussed up, smouldering beauty we all like in such pictures. Chanel made a handful of Spaghettis but, unfortunately, most were of the Franco and Ciccio comedy variety. Outside of this film her only other Spaghetti of note was Killer Caliber .32, one of Peter Lee Lawrence's better westerns. On the down side we are also put through the ordeal of suffering the appearance of a 'cute kid' character played by Giusva Fioravanti. It's not that young Master Fioravanti does a bad job it's just that I disagree in principle with the inclusion of such characters in any way shape or form. For my money Leone had the right idea in Once Upon a Time in the West when Frank wiped out the cute red headed McBain kids before the story even got properly started. Not that I've got anything against children in reality. I've got a bunch of them and love them all to bits. I just don't think they belong in films like these where they invariably are given awful high pitched dubbed voices and bring nothing to the story except an overdose of sentimentality. I don't mind a fair helping of corn with my spaghetti but I tend to gag on too much syrup. In Cjamango the youngster provides the hero with the chance to show he is a full on white hatted good guy which, I guess, is ok. But I can't help but feel that once this was established the director missed a golden opportunity in not having the kid blown up with dynamite when he had the chance. In one of those strange coincidences that you couldn't make up the scene where the youngster is strapped to dynamite has an eery reflection in real life as the child actor later grew into a covicted terrorist, jointly responsible for the bombing of Bologna Station in 1980 where some 85 people died. Truth really is stranger than fiction sometimes.

Cute kid not withstanding, most of the film is pretty solid, if not outstanding. It is probably best described as one of those films which is unlikely to over impress but is a decent enough picture which gives enough rewards to merit the time spent watching it. Mulargia's direction is ok but the film does seem to jump around somewhat, giving me the impression it was rushed through the editing process. But this is a minor criticism. As I said earlier, the film has no great pretentions to anything loftier than an entertaining programme filler and that's what it delivers on. It did reasonably good box office business in its day too; surprisingly squeezing into the top 20 Spaghetti Western box office performers back in 1967 and posting numbers similar to those of Requiescant and $10,000 Dollars Blood Money. These latter two films have stood the test of time somewhat better than Cjamango it must be said but with Koch Media's good looking new release now available you could do a lot worse with any spare hour and a half you may find yourself with.

The aforementioned Koch Media release was the one I saw the film on and it is of the sort of standard in terms of picture and sound quality which we have come to expect from this excellent German company. 2.35:1 ratio with Italian, German and English audio options plus some nice extras which unfortunately only have italian audio with german subs. Well worth the purchase price though for any fan. --Phil H 14:55, 6 August 2009 (UTC)