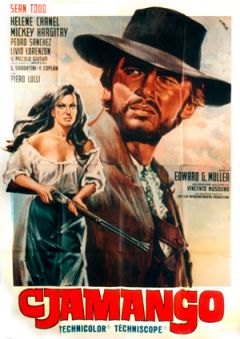 Cjamango wins two bags of gold at the card table, but he’s shot down in a hail of gunfire when bandits enter the saloon and start mowing down everybody in sight. Cjamango survives the incident and discovers that the bandits who have stolen the gold are members of two different gangs, one led by a Mexican called Don Pablo, the other led by an American knick-named El Tigre. The two have fallen out and are now entangled in a bloody war over the gold ...

Leaning heavily on the formula of the two warring factions and the man in the middle - immortalized by Sergio Leone’s A Fistful of Dollars - Cjamango is a rather derivative affair. Of course Cjamango starts playing off both factions against each other, stirring up the hate by suggesting to both gang leaders that the other has the gold, in the hope that they will wipe out each other. There’s also a voluptuous beauty and an abandoned kid, both clear references to the Holy Family subplot of Leone’s ground-breaking movie. And yes, at one point our anti-hero is exposed as an imposter and seriously beaten up, first by Don Pablo’s men, then by El Tigre’s men (in other words: two beatings for the price of one). But as derivative as it might be, the movie is definitely stylish and has all the things fans of the genre are familiar with: a brooding atmosphere, quick shootouts and Mexican bandits who are laughing out loud, often for no discernable reason ...

Mulargia handles the action scenes (especially the quick shootouts) with flair and also comes up with a few clever variations in relation to character and plot. Cjamango is not a pitiless anti-hero but a man able to show mercy and affection, even to an unsupportable kid. There’s also a mysterious man in black, who becomes Cjamango’s guardian angel (but whose true motivations and identity are revealed during the film’s final moments). But if the script has its assets, it also has a few liabilities: It lacks fluency and there are a few continuity problems. The cute little kid quickly becomes annoying and the epilogue, with the revelation of the black-clad salesman’s true identity, feels tacked-on, creating a “What-the-hell -is-this?” feeling. The script is credited to Vincenzo Musolino who also produced. Some sources list him as a supporting actor, but no one has been able to trace him. Was a subplot featuring Musolino entirely cut? This could explain some awkward transitions and a running-time of a mere 83 minutes, but why would a producer cut his own scenes? (*1).

Cjamango isn’t great, but it works thanks to Mulargia’s feeling for the genre and a couple of good performances, notably by Helène Chanel as Perla (Pearl in the English language version). She’s quite a complex character: she’s manipulative and deceptive, running errands for El Tigre while giving Don Pablo (who's madly in love with her) false hopes. She is cold to her father but buys him liquor and she finally redeems herself - and the movie - when it’s almost too late, by influencing the final shootout between Tiger and Cjamango. A hellova woman.

Simon Gelten is a long time contributor to the SWDb. "I'm not as old as Tom B. but I'm working on it. I hope to catch up with him by the end of the next decade.", he says. Simon saw all movies by Sergio Leone and several by Sergio Corbucci in cinema, most of the time in Eindhoven, the city where he was born. Currently, Simon is living in Turnhout, Belgium. Simon is active within the database as both Scherpschutter and his alter ego Tiratore Scelto.
Retrieved from "https://www.spaghetti-western.net/index.php?title=Cjamango_Review&oldid=114257"
Categories:
Cookies help us deliver our services. By using our services, you agree to our use of cookies.