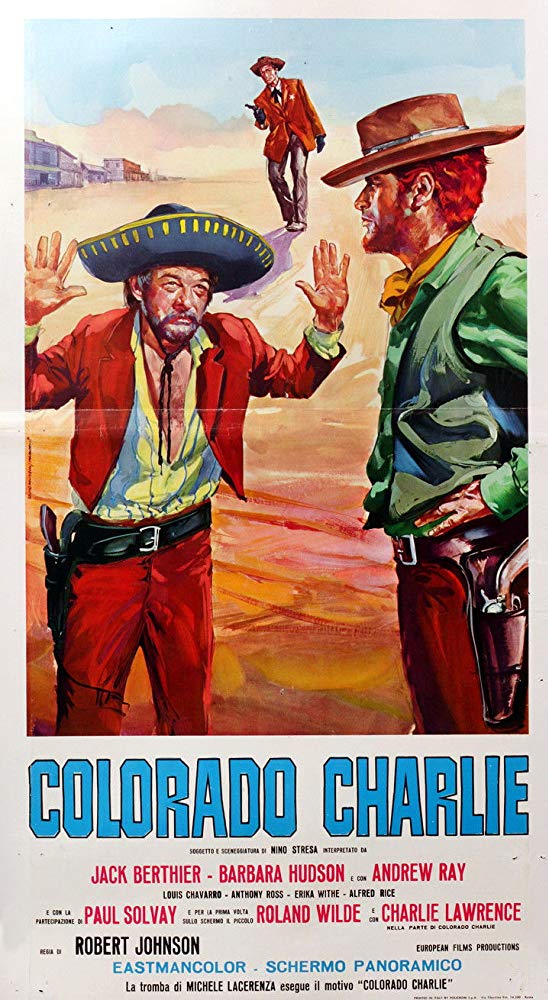 I am re-watching many of the westerns I had seen in years past as I assemble a book on Italian westerns. This is a Roberto Mauri directed western and his first at that. That right there made me rethink my decision to view it again. Many years have passed since I had initially seen it and upon that first time my opinion of the film was none too kind. That first viewing was over ten years ago and my opinion on many of these films has changed, but not as dramatically as the Hollywood-Italian western hybrids, which this film surely is. Yes, and before it progresses too far along here, it’s that Roberto Mauri who directed the notoriously bad King of Kong Island (Eva, la Venere selvaggia, 1968). Mauri directed a total of ten westerns out of his twenty-six credits. Most are average at best and a few like An Animal Called Man (Animale chiamato uomo, Un, 1972) and Court Martial (Corte marziale, 1974) are among some of the worst the genre has to offer. Colorado Charlie was released in October of 1965 in Italy and is one of those early transitional Italian westerns. It is still trying to stay somewhat in the mode of a Hollywood western but also incorporating some Italian western touches into the proceedings. One nod towards the Italian western is the title Colorado Charlie which references the villain in the piece, played by the great Livio Lorenzon. The villain showcased in the title of the film is in my mind trying to connect it to the fantastic dynamic that the larger than life Ramon Rojo (Gian Maria Volonte) character brought to the seminal Sergio Leone classic A Fistful of Dollars (Per un pugno di dollari, 1964). As a matter of fact, in late 1966 a film would be released with the blatant and more obvious name association with the villain in A Fistful of Dollars called Ramon the Mexican (Ramon il Messicano, which starred the genre regular Claudio Undari (as Robert Hundar), donning the villainous tropes to take on the Baxter family again. Well a different Baxter family that is, being accosted by Ramon Morales not Rojo. 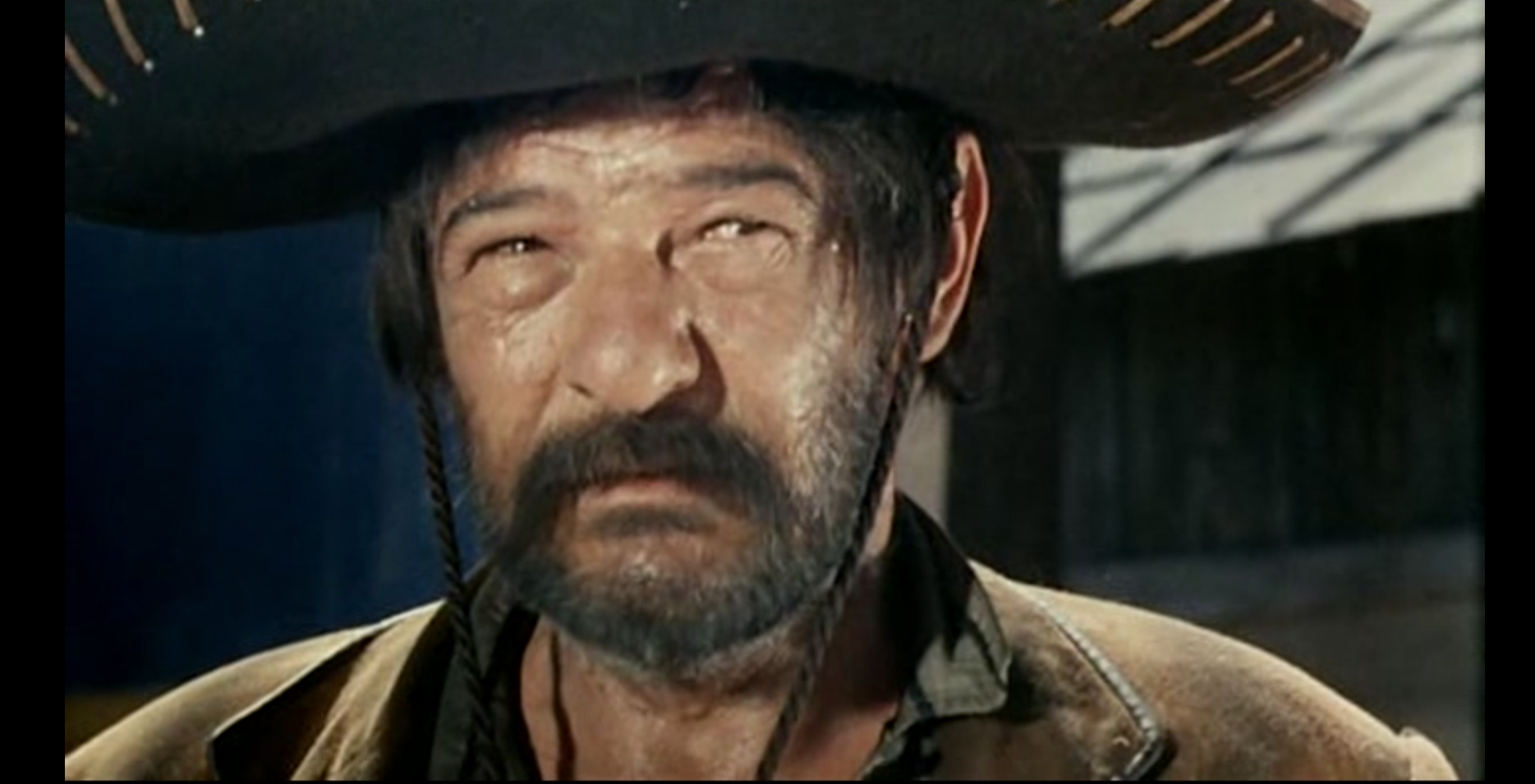 The story revolves around Colorado Charlie and his outlaw gang and a lawman named Wild Bill Danders (Jacques Berthier). Wild Bill has hung up his guns and badge and decided to move away to start anew with his new bride and her young son. Mauri must have liked the sheriff hanging up his guns bit because he re-visited it again in his next western which was the 1968 film Vengeance is My Forgiveness (La vendetta è il mio perdono) which is better known in the U.S. as Shotgun and stars another America actor out to revive his sagging career Tab Hunter. Ah, but the marriage is not even consummated, and news arrives that Jim (Giorgio Cerioni), the newly appointed sheriff in the place of Bill has been killed by Colorado Charlie and his gang after he and his men had tried to stop the bandits from getting away with the $85,000 they lifted off the cattle buyers celebrating at the saloon. Of course, as these films tended to do, Bill’s new wife Nora (Brunella Bovo) pleads with Bill not to return to town to avenge Jim. Nora had foolishly believed that Bill could turn a blind eye to the killing of Jim. Nora is infuriated with Bill and is heartbroken that he has broken his promise to her and went back to “killing.” Nora tells Bill, “The same thing again… Are violence and hate the only signs of manhood? If once you had to give up your killing and shooting it would frighten you.” Bill though has made up his mind to avenge his friend, telling Nora, “I must go Nora, I must don’t you see. I’m sorry, but there are somethings a man’s got to do.” 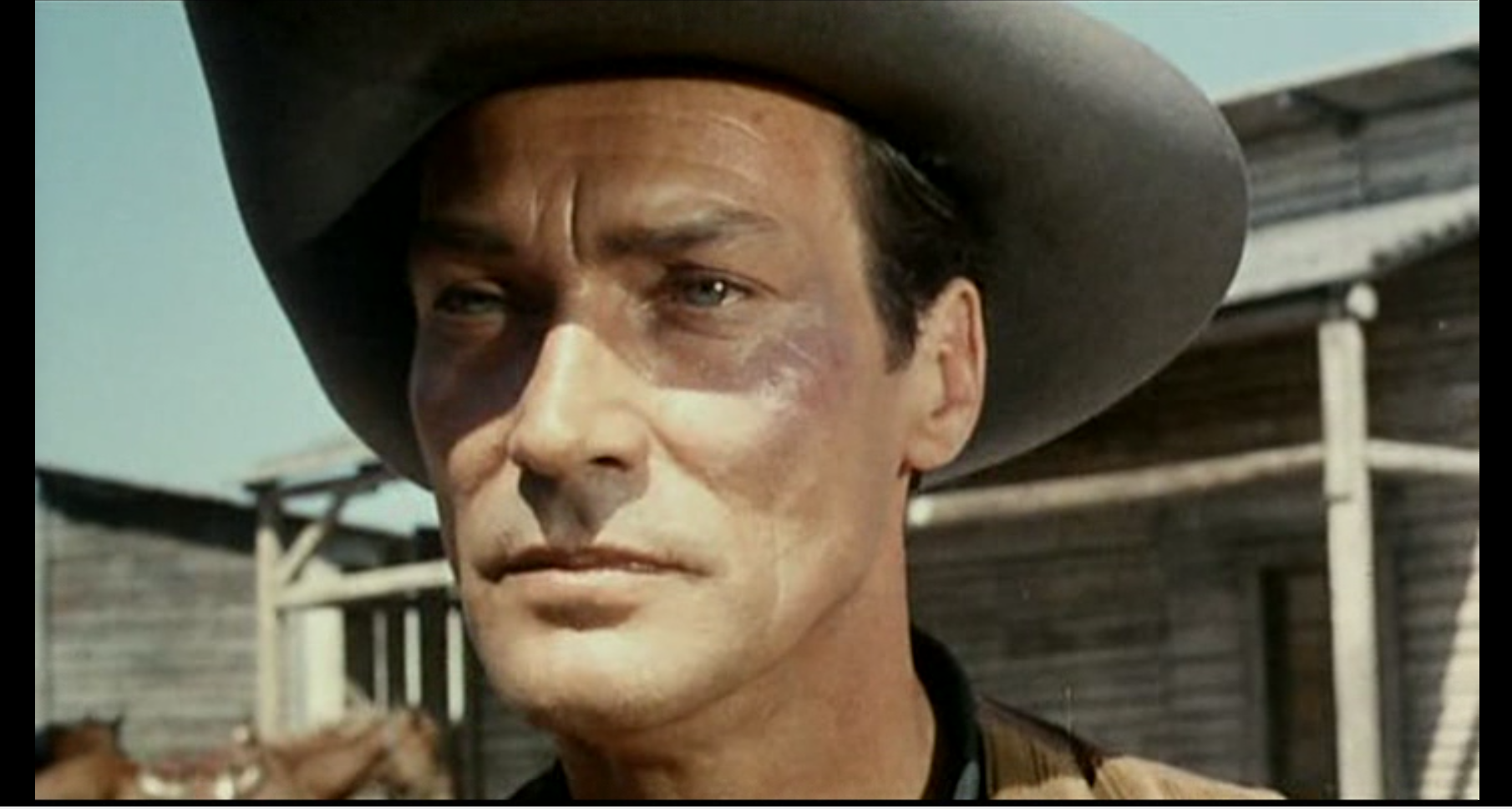 Numerous Italian westerns used the hanging up of the guns up in their narratives including: The Last Gun (Jim il primo, 1964), Hands of a Gunfighter (Ocaso de un pistolero), 1965), Jessy Does Not Forgive… He Kills (Tierra de fuego, 1965), Clint the Stranger (Clint el solitario, 1967) and Return of Clint the Stranger (Ritorno di Clint il solitario, Il, 1972), to name but a few examples. During the shootout in town that killed Jim, Colorado Charlie's right-hand man Dick (Alberto Cevenini) had been shot and badly wounded. Colorado Charlie and a fistful of his men decide to take Dick to a doctor nearby as the rest of the gang head off to await Charlie and the others in Sonora Mexico. 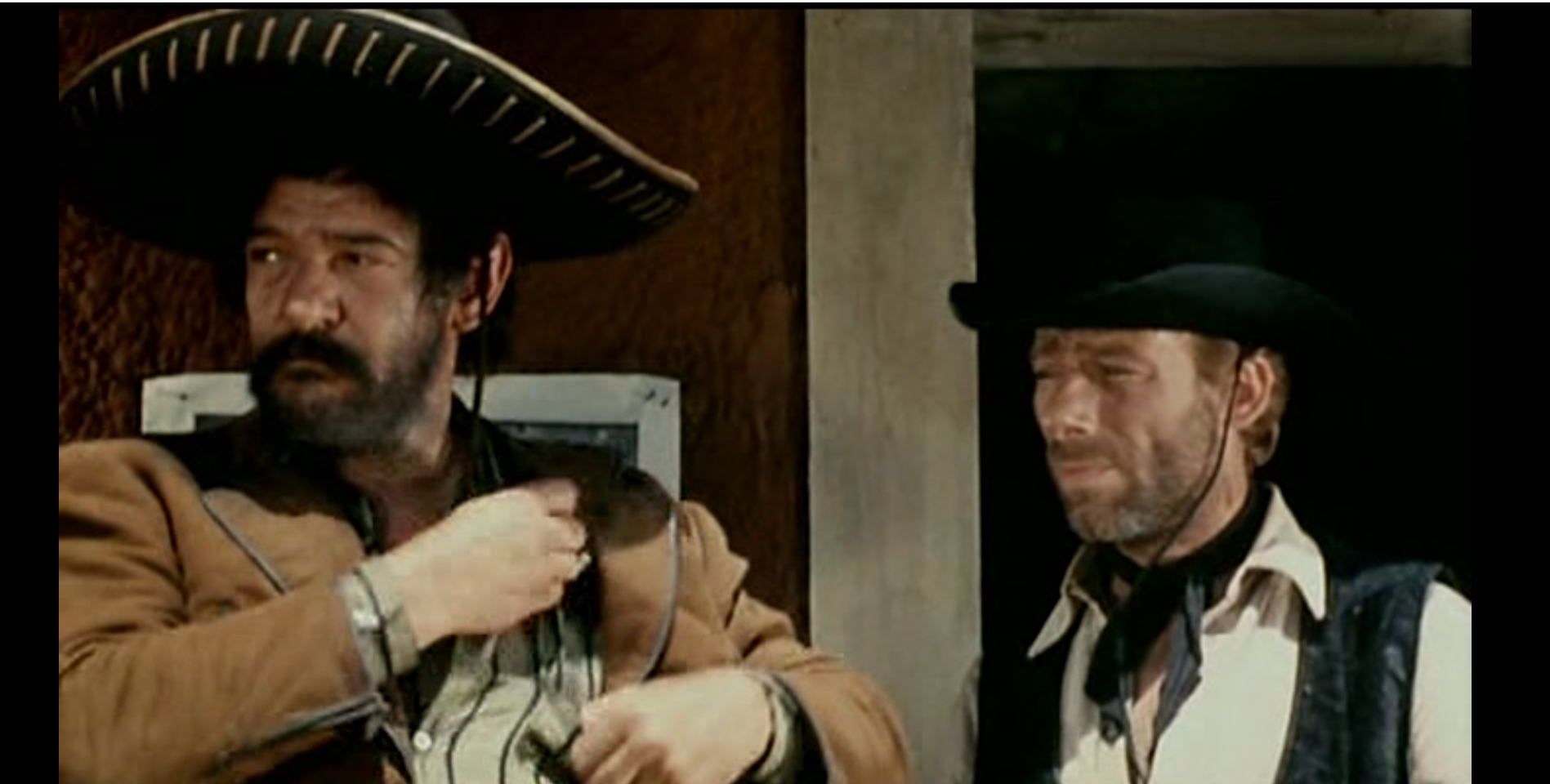 Both the sheriff Wild Bill and Charlie are presented as legendary in their abilities with a gun. One of the things about this This film which I found engaging was that it showcases two early character examples of Pistoleros who had evolved from both the American westerns and the Peplum Films and is a blended hybrid. A somewhat satisfying still reality-based mythos that was presenting Wild Bill and Colorado Charlie as emotionally connected men, the likes of who would transform in the genre, turning into purely mythical proprietors of the art of killing. Men who through the continued life of the genre became more and more god like in their ability with not only their guns but their fist also. In Colorado Charlie we get an exchange between Charlie and Bill which helps explain the mythos that these films were being populated with when Charlie laments his being captured by “the great gunfighter, the noble Sheriff” Bill. “I thought we’d meet face to face someday. But it would be in a shootout. The two fastest guns in the territory. A fight to make history, a fight they would sing about.” The film meanders around a bit as Wild Bill forms a posse and tracks Charlie and his gang, until the worn-out posse members split from the determined Bill and decide to head back into town when they think that Charlie and his men have escaped to Mexico. We get lots of riding and posturing, various fisticuffs and some mostly limited gunplay. We though must wait for the capture of Colorado Charlie by Bill and the eventual freeing of him by his gang who have returned from Mexico to liberate him before we get the inevitable confrontation at the conclusion. A new life as a merchant awaits Bill in another new town, but the past just won't die and after Charlie's men spring him from jail, they beat a trail to pay Bill a visit after one of his gang members had spotted him. After promising Nora once again that he was done with the killing, he backs down from the bad guys, until his stepson berates him for being a coward and Nora must decide how she wants her man to be perceived by society and more importantly her son. 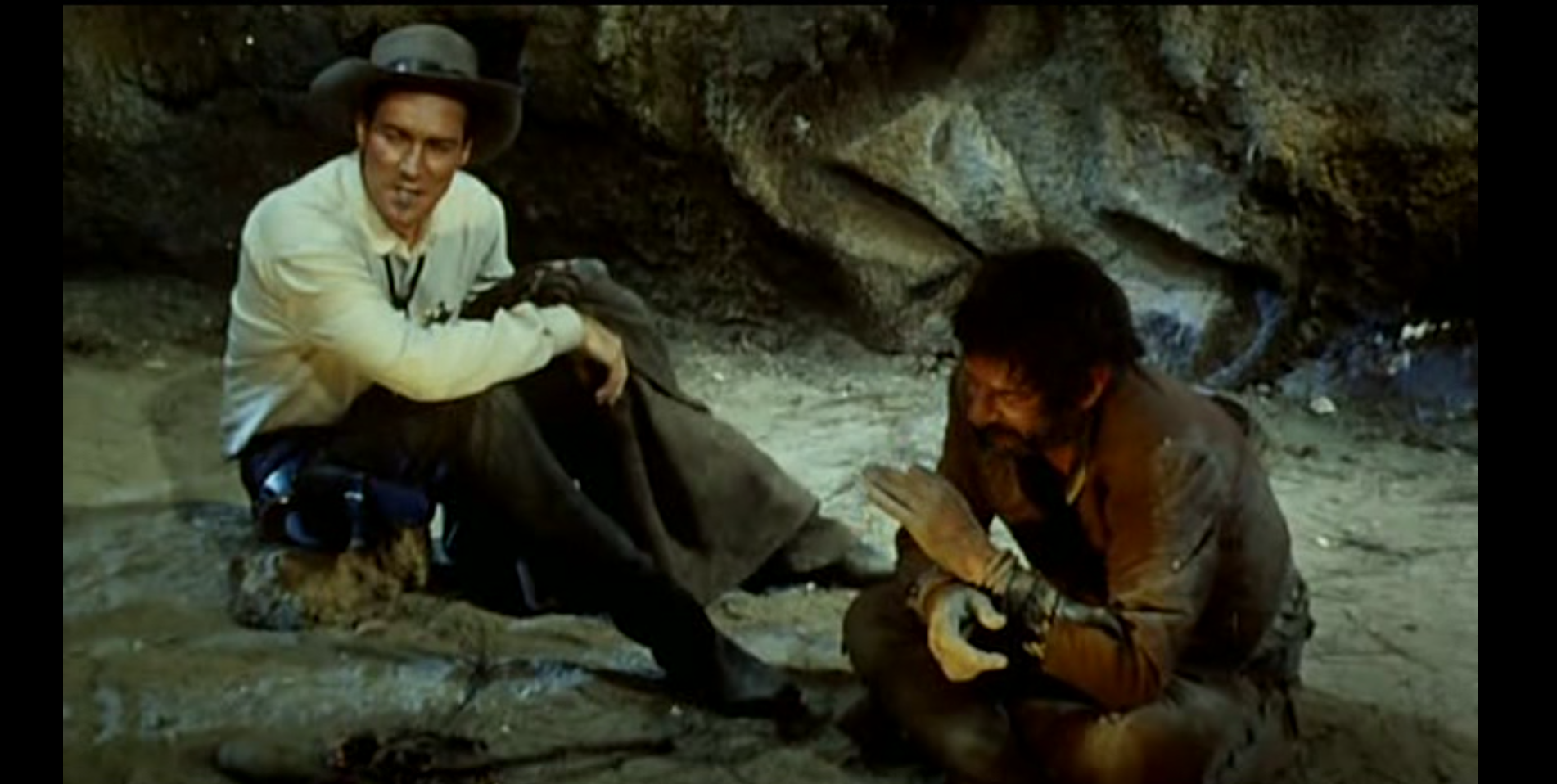 We get a bits and pieces of the Gregory Peck classic western The Gunfighter (1950) mixed into the proceeding, essayed most noticeably when Bill reunited with his wife tells her, “Someone will challenge me because of my name.” The wife who wants her man to hang his guns up and just leave town and his lawman responsibilities is taken from the film High Noon (1952). We get the philosophizing of Colorado Charlie and his knowledge that the west is changing by the encroachment of trains and more and more settlers and how the end will come for the likes of Bill and himself. The film does allow a female character to be featured and have an integral part in the films proceedings… Deeper more complex roles for women being something that for the most part was eliminated as the life of the genre moved forward. Colorado Charlie is presented more as a villain in the Hollywood vein, while he does go over the top, as villains in these films tended to do; he is loyal to his gang members and while sure of his talent with a pistol is never dismissive of the lightning-quick draw of Wild Bill and realizes that a showdown to decide who is better must take place. While not a great western, it is effectively done and besides some heavy does of melodrama that weighs it down here and there it is an enjoyable watch in the mode of a Hollywood “B” western. Jacques Berthier is excellent as the square-jawed, tough sheriff Wild Bill and really seemed comfortable and assured in the role, especially notable when considering this film was his first oater. Berthier would appear in the much better and very underrated Sheriff With the Gold (Uno sceriffo tutto d'oro, 1966), a year later. Livio Lorenzon is an odd choice as the main villain as he lacks the looks or physicality of someone like Gian Maria Volonte, but is effective and turns in a good performance as a fleshed out villainous character. Lorenzon made the transition from Peplums to westerns and was in a whole slew of them but will always be best remembered as “Baker” in the Sergio Leone masterpiece The Good, The Bad and The Ugly (Il buono, il brutto, il cattivo, 1966). Look for a very young Erika Blanc in only her third film appearance as the blonde singer in the saloon. The score is very good featuring the soaring trumpets that reverberated through so many of these films and was composed by Gioacchino Angelo. Roberto Mauri’s next western mentioned above Vengeance is My Forgiveness, stars Tab Hunter and Erika Blanc once again, but this time she’s a saloon owner. Vengeance is My Forgiveness is a good film fueled by a great performance from Hunter, an effective story, a solid ending and is a candidate for a future place in this column. By no means a great film, but if you like the old Hollywood “B” westerns the way I do, this film is sure to entertain.

Article written by Michael Hauss, author of reviews and articles for Monster magazine, We Belong Dead, Multitude of Movies, Divine Exploitation, Exploitation Retrospect, Grindhouse Purgatory and Weng's Chop and various online sites that includes Diabolique, Multitude of Movies, Theater of Guts and the SWDb. He has a love of film with particular interest in the Spaghetti Western and Horror genres. Michael lives in the United States where he resides with his daughter and their two cats Rotten Ralph and Fatty boo-boo.
Retrieved from "https://www.spaghetti-western.net/index.php?title=Colorado_Charlie_Review&oldid=124156"
Category:
Cookies help us deliver our services. By using our services, you agree to our use of cookies.