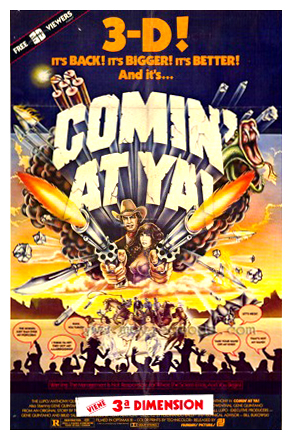 A re-release of this movie was released in 2011. It was an expensive restoration titled "Comin' At Ya! in Noir 3-D!" and premiered among other places at the film market of the Berlin Film Festival (read our report). It was later released on BluRay. It uses a different 3D-process in comparison to its original release.

The 2011 re-release version is missing ten minutes of footage that could be seen for example on an older VHS version of the film. That VHS version shows, right after the opening credits, the main characters at at bank robbery gone wrong and then getting married. This opening sequence is missing from the newer restoration version, which sets in with an attack on the wedding.