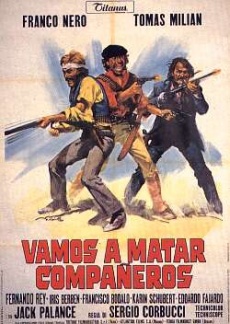 Ok, first things first. Is this really a western? This is an argument that has gone back and forth for a long time when regarding films set around the mexican revolution and tends to split people into one of two camps. Camp 1 says: Yes, it's a western because it shares so many conventions with westerns. Camp 2 says: It can't be a western because it's not set in the U.S. frontier and it takes place in the 20th century.

For the record, I think both camps have reasonable arguments on their side and I have struggled over the years to decide 100% what camp I belong in. Fundamentally, I've always believed westerns should be set on the U.S. frontier and in the 19th century but the frontier has always included Mexico and if we are true to the whole 19th century thing then films such as The Wild Bunch, A Bullet For The General and Butch Cassidy and the Sundance Kid all of a sudden can no longer be considered westerns. Now they are a few babies I am not willing to throw out with any bath water. On the other hand, it is also true that mexican revolutionary pictures do share a lot of conventions with the traditional western. The struggle between the needs of the individual and those of the community, the corruption of power and the general melieu of lawlessness are all common themes in both western and revolutionary movies. Plus there's a whole load of horses, shooting and banditry. But revolutionary movies also invariably feature motor cars of some sort (an anathema in a western for my money)and the soldiers (even U.S. cavalry soldiers)wear kharki not blue and surely that's not right. So what's the answer?

Ultimately, I guess it has to be the decision of the individual but for me, after much deliberation, the mexican revolutionary film gets a special inclusion pass. Fundamentally, despite the 20th century elements which trouble me, revolutionary movies have enough in common for me to make allowances. What's more is there are just too many damn good films I am not willing to let go of which I would be forced to exclude if I got too pedantic.

So there you have it, Vamos a Matar, Companeros! is a western. If you don't like it, sue me.

What is not in question is this; Vamos a Matar, Compañeros! is a great film. Period.

Tomas Milian as Vasco, the reluctant revolutionary, and Franco Nero as Yodlaf Petersen, the money grabbing foreigner give some of the best performances of their careers and the supporting cast of Fernando Rey, Jack Palance and Jose Bodalo add everything you would expect from such seasoned character actors.

The plot is a fairly familiar one for revolutionary movies. A mexican becomes reluctantly embroiled in the revolution while being thrown together with a cynical foreigner who is doing his best to take advantage of the turmoil and line his own pockets. They are both sent across the border into the U.S. (see, I told you it was a western) in order to rescue revolutionary leader Professor Xantos (Fernando Rey) and bring him back to the camp of General Mongo, a rival revolutionary leader and self serving bandit. The twist comes when Professor Xantos' pacifist idealism begins to affect Vasco, causing him to re evaluate his position in the struggle and the loyalties he had felt up to now.

The film is still, above all else, an action adventure and despite the sympathy shown for the professor's ideals boasts an impressive body count helped along in no small way by a machine gun wielding Franco Nero. But this is a much gentler example of director Sergio Corbucci's work. Gone is the darkness of Django and The Great Silence to be replaced by a semi humurous tone with a thought provocing political undercurrent. And his actors respond with relish. Nero is excellent as the blue eyed swede, showing he can play on a lighter canvas just as well as on a dark one, while Milian is perfect as the simple mexican. Intimating with nothing more than a furrowed brow or twinkling eye the hidden depths of his characters personality.

Add to all this one of the catchiest theme tunes ever written by Ennio Morricone and this has to be an all round winner. Vamos a Matar, Compañeros! often appears in Spaghetti fans' top ten lists and it's easy to see why. It is 2 hours of out and out viewing pleasure in anyone's language. Whether you think it's a real western or not. --Phil H 12:42, 10 February 2008 (CET) 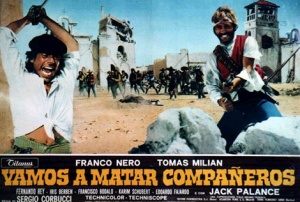 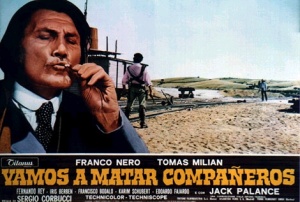 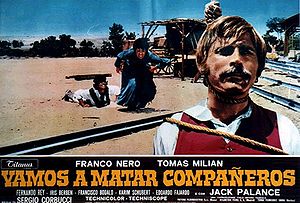 Retrieved from "https://www.spaghetti-western.net/index.php?title=Companeros_review_by_Phil_H&oldid=117154"
Category:
Cookies help us deliver our services. By using our services, you agree to our use of cookies.