Count Bobby, the Terror of the Wild West Review 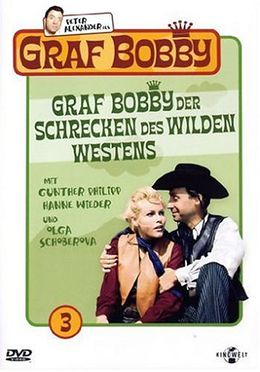 The Austrian Count Bobby has squandered his fortune and must now guide visitors around in family castle in order to make some money. One day he learns that he has inherited a goldmine near Devil's Town, in Arizona. With his good friend, the ever jolly Baron Mucki, he travels West to claim the inheritance, but of course they're not the only ones interested in the goldmine. Immediately after the two noblemen have taken the stagecoach to Devil's Hill, their life is in danger, but thanks to a suitcase full of circus items they manage to outsmart the villains and create the image of two unflinching heroes. But then ...

Austrian actor, singer and TV host Peter Alexander had played the charactor of Count Bobby twice before in the early 1960s and the two movies had been immensely successful. It was not a big surprise that he would make the trip Out West after the Karl May movies had created a western craze in Germany, but various plans couldn't be released because the star was engaged elsewhere (he released several albums and made several movies a year in this period). When he finally took the stagecoach to Devil's town, the Sauerkraut Western was over its peak and Alexander experienced a temporary dip in his popularity because of the rise of rock music. Reviews were rather poor and Count Bobby didn't do very well at the box-office.

Watched today, the film is of course silly, with a lot of lame jokes, and if you watch it as a serious western effort, you will no doubt find it laughable. But if you don't mind this kind of entertainment (musical stars performing their routines in a western setting) it's also remarkably fresh and enjoyable. Unlike his major rival Freddy Quinn (who had made Freddy und das Lied der Prärie a year before) Alexander was a trained actor and he turns in a lively performance here, never taking himself or the movie too seriously. The songs work well within the context of the movie and one of them, Johnny-One-Two-Three is definitely catching. His talents as a show man are unmistakable.

Count Bobby was directed by Paul Martin, an Austrian of Hungarian descent who directed more than 60 movies for the German Film Industry, most of them musicals. He was chosen because he already had some experience with the western genre thanks to the direction of Die Goldsucher von Arkansas (1964). Co-star Gunther Philip was a very experienced comedian, but his broad Austrian accent may cause some problems. Czech actress Olga Schoberova is a beauty and a cutie. She was the most famous sex symbol of her country in those years, often called the Czech answer to Ursula Andress. In 1967 she would marry Brad Harris, whom she had met on the set of Die Goldsucher von Arkansas. The film was shot in Austria and ex-Yugoslavia, near the town of Trebinje (now Bosnia and Herzegovina). Schloss Belvedere was used as the Castle of Count Bobby's family and the town scenes were shot in the same Yugoslavian western town used for the Freddy Quinn movie. 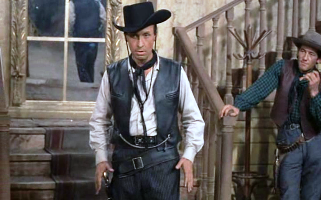 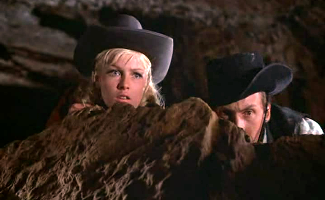 With some 46 million records sold, Austrian Peter Alexander is one of the most successful artists in the history of German showbizz. He had seven number one hits in Germany, which puts him on the same level as Caterine Valente (only Freddy Quinn did better with ten).

He was born in a musical family, but his parents wanted him to become a doctor. He briefly visited Vienna University but had to suspend his studies when the war broke out. He served in the Navy and was taken prisoner by British forces in 1945. He spent a couple of months in a POW camp in Ost-Friesland (Germany). In this period he developed his talents as a performer by hosting improvised shows for his fellow prisoners.

After the war, he did not pick up his medical study, but instead attended the Viennese Max Reinhardt School for drama and also started his singing career. He appeared in stage plays, musicals and operetta and more than forty movies. In the 1960s he started a second career as a TV host. The Peter Alexander Show was first aired in 1966 and would become one of the most popular TV shows in the German language world. The last show was broadcast in 1996.

Simon Gelten is a long time contributor to the SWDb. "I'm not as old as Tom B. but I'm working on it. I hope to catch up with him by the end of the next decade.", he says. Simon saw all movies by Sergio Leone and several by Sergio Corbucci in cinema, most of the time in Eindhoven, the city where he was born. Currently, Simon is living in Turnhout, Belgium. Simon is active within the database as both Scherpschutter and his alter ego Tiratore Scelto.
Retrieved from "https://www.spaghetti-western.net/index.php?title=Count_Bobby,_the_Terror_of_the_Wild_West_Review&oldid=113505"
Categories:
Cookies help us deliver our services. By using our services, you agree to our use of cookies.