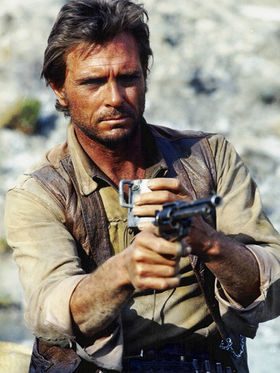 Craig Hill in I Want Him Dead

The actor Craig Hill was born as Craig Hill Fowler in Los Angeles, on March 5 (or 6), 1926. He began his acting career in with small roles in Hollywood movies such as Joseph L. Manckiewizc' All about Eve (1950) and William Wyler's Detective Story (1951). In 1952 he was a supporting actor in the John Ford war movie What Price Glory alongside screen legend James Cagney and Robert Wagner. He appeared as P.T. Moore in all 111 episodes of the successful TV series Whirlybirds (aired between February 1957 and January 1960) about two friends owning a helicopter company. Robert Altman directed 19 episodes of the series.

In the early sixties, Hill moved to Spain. In 1965 he was cast, by director Rafael Romero Marchent, to appear in the paella western Hands of a Gunman. His breakthrough as a spaghetti western actor came with his starring role in A Taste for Killing (1966, Tonino Valerii) as the enigmatic Lanky Fellow, an illiterate bounty hunter who doesn't chase outlaws, but follows money transports, knowing that outlaws soon or later will show up. Neither Hill nor director Valerii were first choice. Valerri had replaced Spanish director Ricardo Blasco (who had fallen out with the producers) in the directional chair, and the Italian distribution Company Titanus had chosen a young American actor who vaguely looked like Sean Connery to play the bounty hunter. The actor of their preference turned out to be a drug addict and when Hill was proposed by the Spanish co-producers, the Italians agreed because Whirlybirds had been a success in Italy under the title Avventure in elicottero.

Hill became a genre regular who appeared 16 spaghetti westerns; some of the more popular titles are 7 Pistols for a Massacre (1966, Mario Caiano), Fifteen Scaffolds for a Killer (1967, Nunzio Malasomma), Bury Them Deep (1968, Paolo Moffa), I Want Him Dead (1968, Paolo Bianchini), according to many his best movie, and Drummer of Vengeance (alongside Ty Hardin). In the eighties and nineties he also appeared in thrillers, comedies and dramas, and also continued to make guest appearances in TV series.

In 1990 he married Spanish fashion model and actress Teresa Gimpera. The couple lived in Barcelona.

His last acting job was a small role in the Spanish-German (English language) movie Food of Love, an adaptation, by Spanish director Ventura Pons, of David Leavitt's novel The Page Turner. 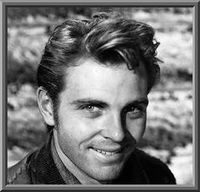 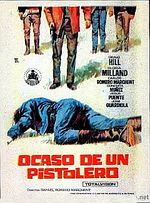