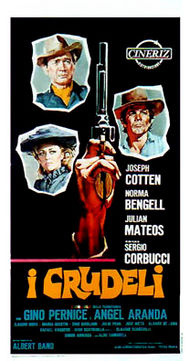 Based on an idea by producer Albert Band (who reportedly intervened in the directing), The Hellbenders is a companion piece to Band's self directed The Tramplers (1965). The pseudo complex story wasn't suited for a typical SW nor was it for the directorial style of director Corbucci, who still delivers a lot of nice framings, but overall directs rather anonymously. The episodical screenplay remains only on the surface with the main characters and their motivations being pretty dull (and the acting is likewise flat). The basic conflicts are clear after the initial scenes and as there is no development, the ending could have happened in the same way after half of the screentime. I crudeli is too short and too long at the same time. by Stanton