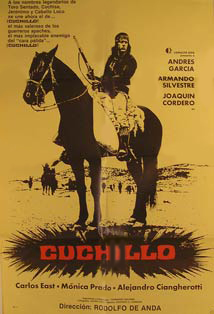 Arizona, late 19th century, on the US-Mexican border: women, children and most of the men of an Apache tribe have gathered, the waving flag of the United States in hand, and are ready to face the 'white man' to subjugate. But suddenly the approaching troops of USA cavalrymen start shooting into the crowd of the waiting Apaches without any apparent reason and cause a terrible bloodbath. An Indian woman with an unborn child under her heart survives the massacre. Her son Cuchillo, which means 'knife' in English, is said to be the promise of Chief Cochise, to atone for the injustice committed against the defenseless Apaches one day. When the boy has grown into a strong fighter, he begins his expiatory procession against the blue-clad soldiers who, under the leadership of the bloodthirsty General Boyd - the 'Blue Devil' - make the area unsafe. First of all, it is thefts from the army’s stores that puzzles the heated general. Then he learns who is behind the repeated raids. Cuchillo becomes the general's declared enemy. He tries to catch the saboteur by bribing some Indians, but Cuchillo escapes. When all does not work, Boyd lures the Apache warrior into an ambush in his own village. Cuchillo escapes again, but Boyd follows on his heels. In the mountains both men stand face to face.

Retrieved from "https://www.spaghetti-western.net/index.php?title=Cuchillo&oldid=138870"
Categories:
Cookies help us deliver our services. By using our services, you agree to our use of cookies.