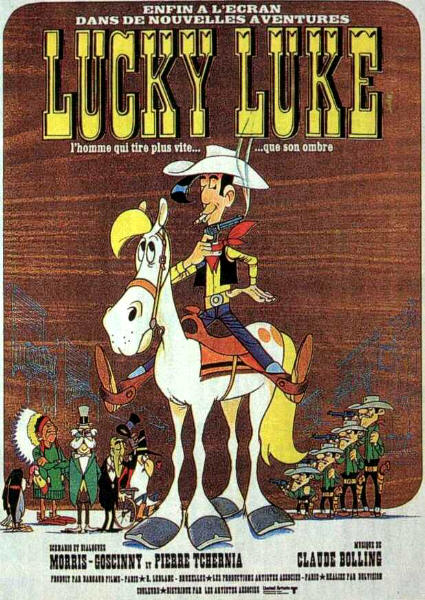 A group of settlers crossing the desert in a wagon train notice a solitary daisy and take it as a sign to stop and found a town on the spot. The new town soon attracts all kinds of wrongdoers and becomes completely lawless until the day that Lucky Luke arrives. Lucky Luke casually foils all would-be attackers. The grateful town's people make him Daisy Town's first sheriff.

Everything is fine until the four notorious Dalton brothers ride into Daisy Town and take it over. Most people let them have their way and the town returns to lawlessness. Lucky Luke renounces the office of sheriff but tricks the Dalton brothers into turning against each other.

After being driven out of town, the Daltons persuade a local native tribe to declare war on Daisy Town. Lucky Luke comes up with a plan to keep the tribe confused until the cavalry arrive. A peace treaty is signed and the future looks bright for Daisy Town. However, when gold is discovered in the hills, the town is immediately abandoned and Lucky Luke rides off alone.

Retrieved from "https://www.spaghetti-western.net/index.php?title=Daisy_Town&oldid=113566"
Categories:
Cookies help us deliver our services. By using our services, you agree to our use of cookies.