Anthony Steffen and Fernando Sancho arrive in the town of Brownsville, where Steffen’s father once lost an emerald mine at the card table. It’s time to get the family property back, but that’s easier said than done. Steffen’s swan song is a comedy without capers 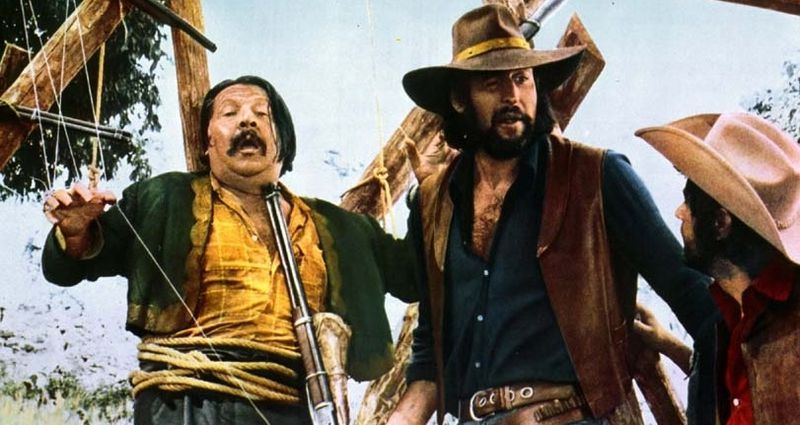 The final spaghetti western of Anthony Steffen, the man who made more of them (as a lead actor) than anybody else on the face of this earth. In the opening scene our hero, protecting himself from the sun with a fashionable parasol, saves the life of Lou Macone (Sancho), a drifter who was locked up in a bamboo birdcage high up in a tree by Mexican peasants for shagging one of the local señoritas. Instead of shooting the rope in Blondie style, he blows up the tree in the style of Sean Mallory (from Duck, You Sucker!), using nitroglycerine ... 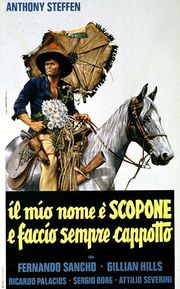 Somehow Sancho survives the whole thing and (again: somehow) the two men end up in the town of Browsville. Steffen’s father once lost an emerald mine in a card game, and now the time has come to get the family property back. When Steffen Sr. lost his property, it was stipulated that his son could win it back by beating the new owner’s daughter Glenda at the card table, once the two men had lost the land of the living. Problem is that Glenda can’t play cards, so Steffen will have to teach her how to play the game first ...

Scopone is the name of a card game, but the only game mentioned in the movie - even in the Italian language version - is Poker and Steffen’s character is never referred to as Scopone, but invariably called Dallas. The film was released in 1975 but most probably shot earlier, some think as early as 1972. There are a few similarities to Arizona Colt Returns, in which Steffen was cast alongside a comical side-kick, but that movie worked, at least to some extent, because it was a mix of comedy and real spaghetti western violence. Scopone is unbloody, therefore Steffen is not allowed to perform his familiar trick of rolling over and shooting a quartet of opponents with only three bullets. In most scenes he is a bystander, an onlooker watching the movie fall apart, not able to do something about it. Comedy wasn't really his thing ...

The film features a plethora of familiar westerns faces, but none of them excels in comedy either. Claudio Undari (Robert Hundar) is the oldest and most fearsome of the Bright brothers and a terribly overweight Ricardo Palacios plays a character called Hand Buster, the leader of a group of shady dignitaries who also want to lay their hands on the diamonds. The only actor with some talent for comedy, Fernando Sancho, does his utmost best to make up for all the others - shouting, jumping around, even showing his fat ass (!) in one particular scene, but the results aren’t exactly overwhelming. There's a nice scene though, in which he is tied to a palisade - head, arms, legs, fingers and all - by the Bright brothers.

Glenda, the damsel in distress who can’t play cards, is played by British actress Gillian Hills. She’s quite good-looking and director Bosch should have asked her to double Sancho in that one particular scene. Gillian is not too well-known, but she was in a couple of notorious movies: she appeared in Michelangelo Antonioni’s Blow Up (alongside Jane Birkin) and was one of the girls picked up by Malcolm McDowell in a record shop in A Clockwork Orange.

Retrieved from "https://www.spaghetti-western.net/index.php?title=Dallas_(Il_Mio_Nome_è_Scopone_...)_Review&oldid=105945"
Category:
Cookies help us deliver our services. By using our services, you agree to our use of cookies.