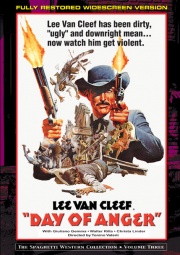 Scott Mary (Giuliano Gemma) is a poor errand-boy, pracising his gun-drawing skills until one day he meets Talby (Lee van Cleef), a gunman who is after several thousand dollars owed to him by a former gang buddy of his whom he chased, killed and got the information from that in the same town where Scott lives, a conglomerate of corrupt businessman are the ones holding on to the dollars he is after. Fed up with his stable-cleaning business, Scott tags along with Talby as his student, picking up skills as a gunmen, while Talby is plotting to take over the town. The lawmen, among them Scott's former mentor Murphy, try to convince Scott to change sides and put an end to Talby's ruthless crusade to wealth, but Scott declines in misbelief until one day his mentor is shot by Talby himself. And that is when the student turns against his master, in a confrontation only one of the two men will walk away from alive...

Tonino Valerii has made a great piece of cinema with Day of Anger. The cinematography is well thought-through and the acting is top notch. The score by Riz Ortolani adds up to the great experience this film has to offer, from very well-drawn characters, a suspense-filled plot and lots of shootings to a more than one deadly stand off. Everything you need in a Spaghetti Western. A very enjoyable flick and among the A-bunch of Italian westerns. A-

This is one of the earlier releases by Wild East, the number one indie publisher when it comes to spaghetti western releases. The DVD comes with a nice design and a little but lovely done mini-booklet.

The DVD sports a nice looking anamorphic widescreen transfer featuring an uncensored version of the film. The image is quite well restored and the quality seems more than decent. However, there are speckles, grain and such, and the picture clearly isn't up to par with modern restoration jobs of the Koch Media kind. But all in all, this is good enough and to many, this is the best version in existance anyways. B-

They have restored a monaural English language track for this DVD which sounds not half as good as the image looks. Actually the sound has very good parts but in others it just sounds like your old vinyl, crackling like a grammophone. It is a bit disappointing that not as much effort has gone into the sound as what has gone into the picture quality. Nevertheless, it is a decent job and serves its purpose, the changing of quality might be distracting, especially when turned up loud, but it is good enough. The second audio option is the Italian version, which sounds a tad better but since they do not offer subtitles to it, the track is worthless if you do not understand Italian. C-

There is a number of extras, namely some picture galleries, trailers and an interview. The probably most original extra is the music-only audio track the DVD offers. But the 17 minute interview called "Gemma on Gemma" is also a very insightful and picture-laden piece which offers a lot of information. Two alternate opening credit sequences are offered as well as a range of trailers and tv spots. Actor filmographies and an Almería then and now comparison rounds off the package. B+

Day of Anger is an outstanding Spaghetti Western, a piece of Italian cinema the true fan must not miss. Gemma and Cleef provide great performances in this well-directed film by Valerii. Enjoyable and well done, and so is the DVD. While it surely has its weakness in terms of sound quality, the decent transfer and the nice extras make up for that. Is it worth the high price? If you don't speak French (there's a good version available in France) then this might be as yet the best DVD to go for, and for a true fan, the disc is well worth the price. Europeans might want to wait if there's an alternative coming out some day, but even then, this DVD will remain a great piece of work by WildEast and a DVD I am proud to have in my collection. B+

Retrieved from "https://www.spaghetti-western.net/index.php?title=Day_of_Anger_DVD_review&oldid=39467"
Categories:
Cookies help us deliver our services. By using our services, you agree to our use of cookies.