Day of Anger review by Divy

One of the interesting features about Spaghetti Westerns was how they could refer to contemporary affairs, societal injustices or give a commentary on human issues even if they were, mostly, tales of violent men busy hunting for their personal 'El Dorados'. Django (1966) was able to reflect the racist attitudes in society through Major Jackson's Red Shirts. Duck, You Sucker (1971) discussed how it's easy to take extreme positions under the romantic notion of a revolution, yet the inner frailties of the individuals are often in conflict with the 'group' cause. 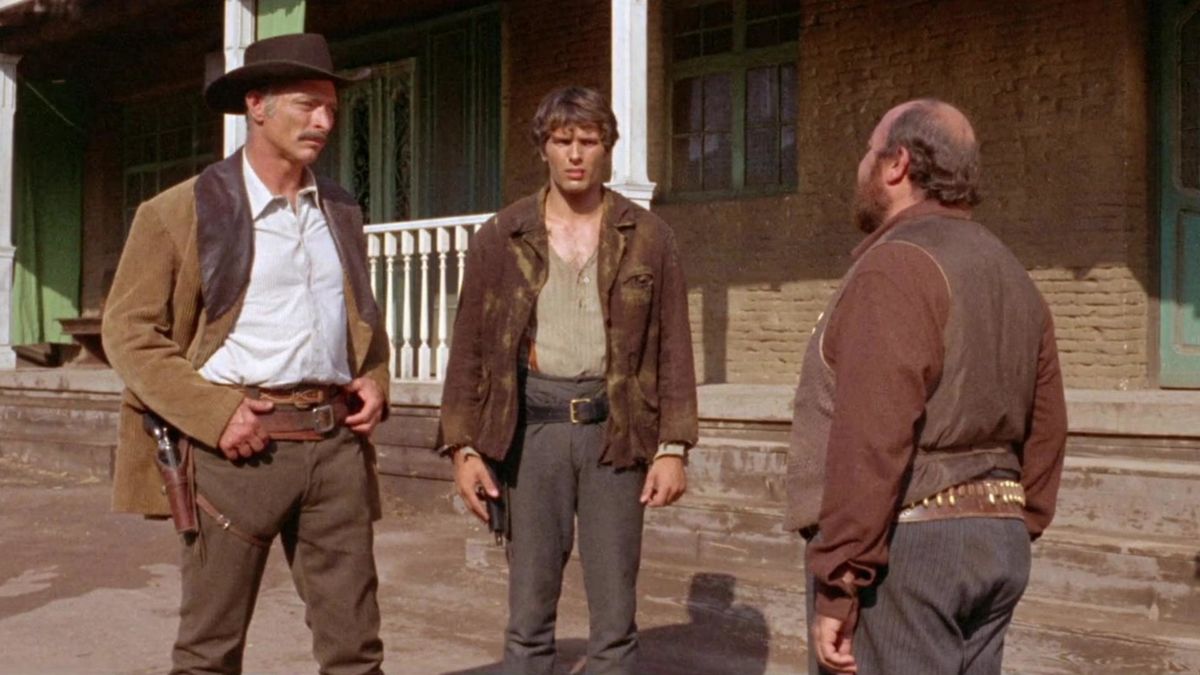 Tonino Valerii's Day of Anger (1967) begins with painting the picture of the town of Clifton and its residents. The director acquaints the audience well with the locale which is going to become the center of action in the movie. We are introduced to Scott (Giuliano Gemma), who is the town sweeper, doing the menial tasks which are assigned to him. Due to his profession and doubtful parentage, he is degraded by the high and mighty of the town. His touch or sight is a source of disgust to the majority of townspeople.

He stands at the lowest rung in the caste system practiced in the town of Clifton.

His only allies are Blind Bill, a scrap collector, and Murph Allan Short, a former gunslinger. He also finds some sympathy from Vivien Skill, the local madam, and one of her girls, Gwen (Christa Linder). The maltreatment that he has seen from a very young age, has turned Scott into a submissive individual, who's afraid of the townspeople. However, there are hints of rage against his standing in society from the very start.

So, when he is called an "Ugly, son of a bitch" by Abel, he almost instinctively readies himself to strike his tormentor, but eventually restrains himself. This is the 'system' of Clifton.

However, things change with the arrival of a stranger, Frank Talby (Lee Van Cleef). He is harsh to everyone including Scott but treats him as an equal. This act of Talby doesn't suit the natives of Clifton. Eventually, things spiral out of control as Talby makes Scott sit with him and share a drink.

This leads to a shoot-out with one of the town toughies, who objected to this act. Frank Talby is the obvious winner. While Talby claims self-defense and is acquitted, this act ensures that life becomes hell for Scott, as he is blamed for Talby's actions. 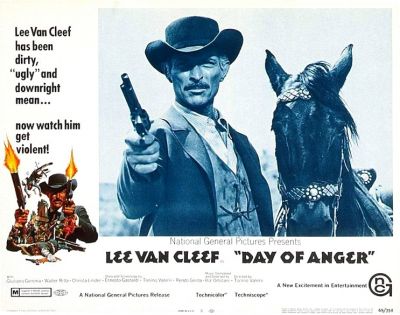 When Talby leaves the town, Scott has to run after him. He implores Talby to take him under his wing and educate him in the art of gun-slinging. Talby takes him under his tutelage without much hesitation.

Soon, the duo realizes that the high and mighty townsmen of Clifton are not so respectable after all. They owe Talby huge amounts of money from a robbery gone wrong. Talby and Scott return on the pretext of getting the money back. But Talby has other plans on his mind.

And this is where Day of Anger rises above your average spaghetti western. While the movie is indeed about the mentor-student relationship between Talby and Scott, there are complications involved.

These include Talby's ulterior motives behind returning to Clifton and training Scott. Then there is Scott's friend Murph, a washed-out gunslinger, who knows that there is more to life than guns and bravado.

Talby is a ruthless individual. He knows the times he lives in are tough and takes all measures to protect himself. So, he doesn't hold back from eliminating even the minimal of threats. These include shooting down Perkins, who wasn't a great shot by any stretch of the imagination. (Abel tells Talby "Perkins was a braggart and a bully, but he never tried to shoot anyone.", Talby responds "How was I supposed to know that? A gun is not a toy.")

This 'need' to secure his future dictates Talby to join hands with Scott. The latter, due to his own inhibited nature and the fact that Talby has been a mentor to him, doesn't quite gauge what Talby stands for despite his friend Murph's pleadings. 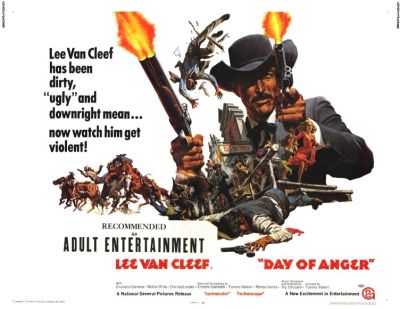 Murph tells Scott that Talby is growing older and is aware of his diminishing powers as a gunman. Thus, he has decided to settle down in this town of Clifton and take an apprentice like Scott who can get his dirty work done. ("Talby has done the same as a lot of others before. He has taken a helper, somebody young, who shoots for him when things get too difficult." "A day will come when you will be throwing too big a shadow on him. This is his last chance, his last city…")

The movie shows us that Murph is correct about Talby. He is like an imperialistic force taking over the town of Clifton. The money that the prominent and respectable citizens owe him was an excuse to enter their domain.

Now, the real tussle is between Talby and the old order which comprises Abel, Judge Cutcher, and the banker Turner, to take control of the town. In the pursuance of this goal, Talby takes over Abel's saloon and gets his gang into the town, while the old order invites Owen, a mercenary, to take care of Talby.

Murph is also right with respect to the relationship shared between Scott and Talby. While on the surface there is a happy mentor-student relationship blossoming between the two, beneath this façade lies a clear-cut commercial angle.

Talby looks after Scott, educates him on the '10 essential rules on gunfighting', the techniques involved in gunfighting, and most importantly, treats him like a human being. Even when Scott is ambushed by Judge Cutcher and the banker, Talby arrives to save him. However, at the same time, he knows that Scott is better than him at gunfights.

So Talby ensures that he chooses Scott's gun. While Scott is thrilled at getting his first gun, Murph explains to him later that it was all well-planned by Talby to have an edge in case of a gunfight.

Talby also keeps from Scott the exact technique employed by him during the duels.

While there are several hints for Scott as to Talby's true motivations, he ignores them. The reason for the same is Scott's socio-economic conditioning and the fact that Talby acts like a father figure to him. While he values the friendship and sound guidance of Murph, he often overrules the old man for the more flamboyant Talby. 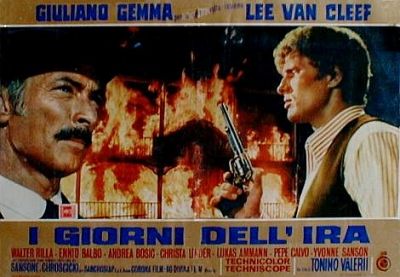 Scott understands that power flows through the barrel of the gun and this is the only way he can gain respect in his life. This would help him become his 'own man'. And Talby is the only one who can educate him in these matters.

Scott is unwittingly becoming a henchman for Talby. He is not entirely comfortable with the changes he sees either, even taking sides against Talby when Murph is appointed the sheriff.

His eyes open up when he sees the true nature of Talby towards the end. But by then it is too late for Murph. Still, when Scott throws away his pistol after taking care of Talby, one understands that he has learned his lesson. The gun can help an individual or a cause achieve momentary liberation. It is what happens after that which is consequential.

Scott might have been swayed by materialistic considerations but at heart, he remains the simple boy he was when we met him at the beginning of the movie. Scott doesn't let his base desires take control over him.

Though he follows Talby's path, he never quite becomes Talby. On the other hand, Murph is an influence that never leaves Scott.

Murph's status isn't much better than Scott's. He is shown as a retired gunslinger who seeks refuge in the stable where Scott works. However, he has been 'something' back in the day. He once drove out Talby from a town. 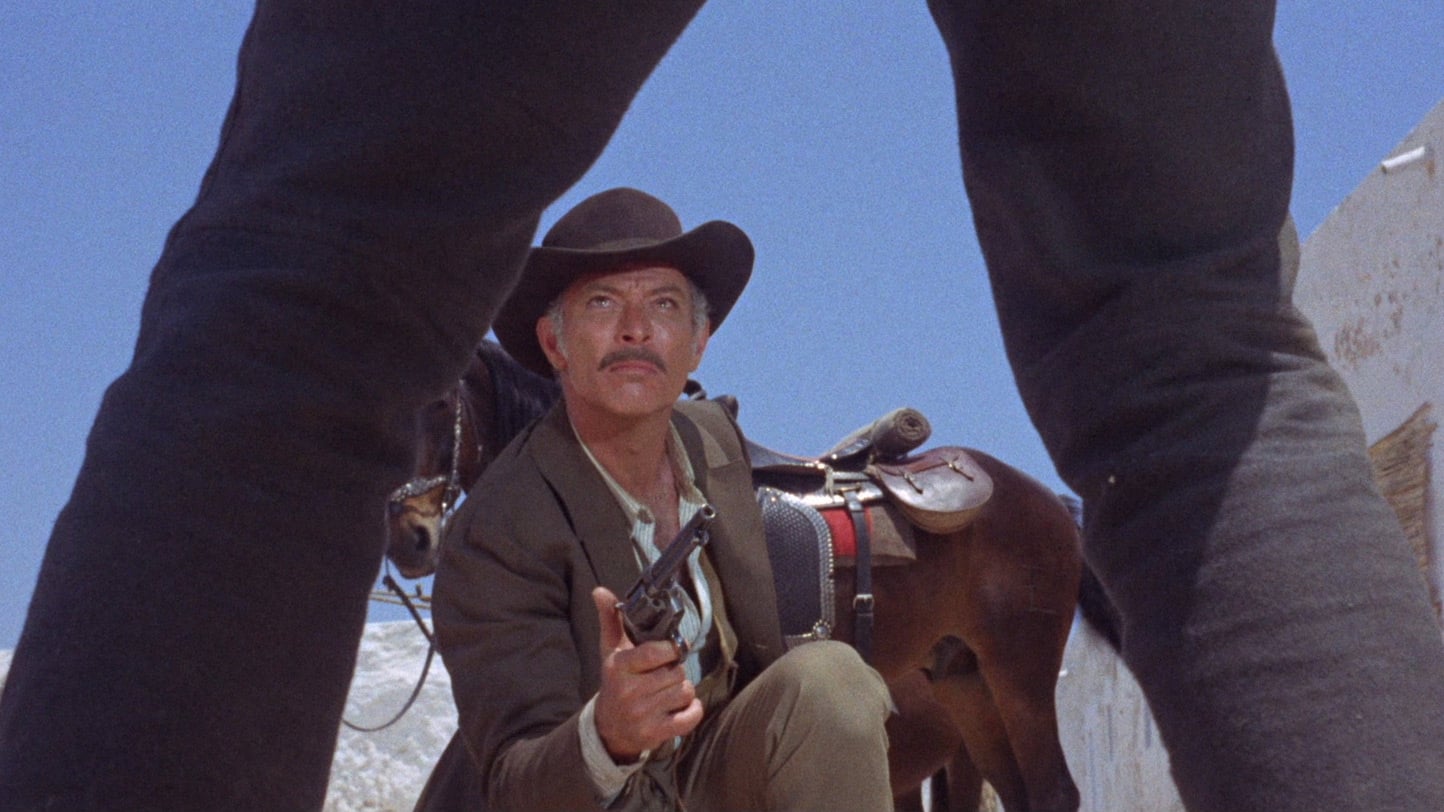 And he knows how the world operates. He joins the 'older order' not due to any particular love for them but he knows that Talby, the outside force, is a greater threat to the peace and well-being of the town. He knows the outsider is going the extract all the resources and build his wealth, while the 'older order' even if malicious should be tackled domestically by Scott and himself. So, he proposes the idea of making a temporary pact against Talby.

Day of Anger almost feels like it is telling us the story of an imperialist expansion. An outside force (Lee Van Cleef) arrives in the town, builds an army out of the locals (Scott), who are both socially and economically mistreated. It acts like a benevolent force that gives agency and strength to the oppressed but its real motivations lie elsewhere.

It then moves on to right the genuine financial grievances (The issue of Talby's money being stolen) it has suffered due to mismanagement of the local elite. (The old order represented by The Banker, The Judge, and Abel)

However, it intends to establish itself in the place and reap financial benefits from it. The outside force causes disorder and brings forth doom. Some wise men (Murph) try to warn against this chaos.

Luckily for Clifton, Scott wakes up at the right time and rebels against Talby's forces.

Day of Anger has some exceptional duels (including one on a horseback!) and the dialogues are well-written (After being challenged to a duel, Lee Van Cleef's Talby tells Owen "Alright, I'll kill you any way you want.") but its real strength lies in its great story.

Divy Tripathi is a Law Graduate from India. Follow Movies, Cricket, Politics. Fell in love with Spaghetti Westerns at the age 10, when while flicking through channels, accidentally chanced upon the Mexican stand-off in The Good, the Bad and the Ugly. Have been following ever since, hope this genre makes a comeback soon!
Retrieved from "https://www.spaghetti-western.net/index.php?title=Day_of_Anger_review_by_Divy&oldid=123784"