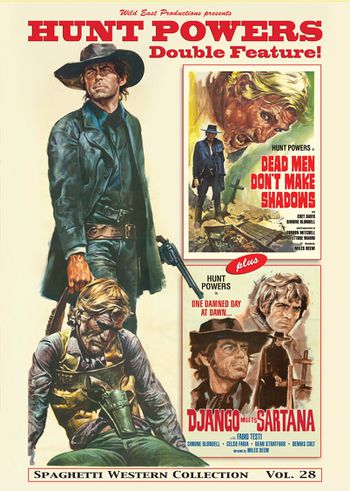 Blonde, a gunfighter (Chet Davis), pursues bounty killer Lazar (Hunt Powers) to an eventual showdown, but along the way they encounter a ruthless mine owner (Ettore Manni) who controls his town through violence. It's a rambling affair but fun to watch. Look here for a detailed review: Film Review

Opinion: Certainly one of Fidani's darkest and most taciturn westerns but not his best. I personally think it's quite ok for a Fidani though.

An unarmed stranger (Fabio Testi) rides into Black City to accept the sheriff's job. The town is plagued with two bandit gangs, one American and the other Mexican, who have joined together to use the town as a base. Into the mix rides the enigmatic Django (Hunt Powers) looking for vengeance for the death of his wife. By the end of the film they have joined forces and wiped out both gangs. Look here for more information: Opinions

Opinion: One of the better Fidanis with a very nice cast. Fidani fans must have it! Others should probably stay away...

The presentation of the DVD (coverart) is more than just alright, but the quality doesn't convince as much as on the 'Two "Killer" Spaghetti-Westerns DVD'. The transfer is colorful, acceptably free of major damages and offers decent contrast, yet is a bit grainy and at times not very sharp. Overall though, it's a quite good transfer and doesn't really leave room for much complaint. The English trailers of the movies as well as picture galleries are included. The only audio options are the English dubs, which are decent, sound quite dynamic and are generally of good quality. The highlight of the extras is an almost forty minute long, very interesting, interview with Jack Betts, who has a lot to tell about his time in Europe and Italian filmmaking.

Fidani fans and completists will be very pleased with this release. Wild East did a really good job with those two C-grade Spaghetti-Westerns by our beloved friend Dick Spitfire.

Retrieved from "https://www.spaghetti-western.net/index.php?title=Dead_men_don%27t_make_shadows_%26_Django_meets_Sartana_DVD_review&oldid=139711"
Categories:
Cookies help us deliver our services. By using our services, you agree to our use of cookies.