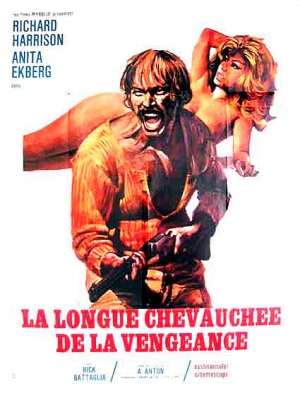 The film starts in present day, in 1865 New Mexico, with the ending of the story. Outlaw Montana (Rik Battaglia) and his gang assaults the sheriff’s office of sheriff Jeff Carter (Richard Harrison). Montana is shouting “I want the woman I paid for, don’t be greedy, you should share these things”. After a firefight Montana is killed by the sheriff. We learn that Jeff was seeking for revenge because Montana was one of the responsible men for the dead of Jeff’s sister Deborah. After this opening scene, we look Jeff in the eye and the story switches to a long flashback, which contains almost the entire movie.

At the Carter Ranch sister Deborah receives visitors of the railroad company. They came to an agreement. The railway company buys the ranch for $ 150,000. But Deborah explains that there will be a delay because she wants to wait for her brother Jeff. He is released from prison because the war is over. The company will wait for 2 months, before that time Jeff will be back home. Deborah is paid $ 50,000 in advance. Jerome, the manservant at the Carter ranch, bugged the deal just before going to town. At the bar in town, Jerome makes a deal with Carl Armendariz to rob Deborah’s gold. Carl brings the gang together; Montana, Ling Fu & Colton. While Deborah drives to the bank to get the money somewhere safe, she is robbed, raped and killed. Jerome takes off his distinctive red poncho to cover her body.

In the next scene Jeff comes home and meets ranch foreman Tommy. Jeff is told that his sister is brutally murdered. Tommy has the information he needs to find the men responsible. Pieces of Jerome's red poncho are thrown at the corpses after Jeff takes revenge. In the final scene we are switched back to the present through Jeff's eyes and we are back in the sheriff's office. But the revenge isn’t complete yet…

I really enjoyed this movie and I loved the story. The storytelling with the long flashback makes it compelling and interesting. You are provided with some information of the ending of the story, but you don’t know how it came to this point. That’s what you can find out in the long flashback.

It’s a revenge movie but it doesn’t have the feeling of it. I think that's mainly because they didn't build up the tension in the right way and too little attention is paid to the coolness of the hero. The final half hour of the film starts promisingly as Jeff is challenged in a horse race. This turns into an anti-climax and after that the film loses some interest. It feels a bit rushed from then on and we don't get much backstory. The finale of the film, after the long flashback, is nice but too short in my opinion.

I think the biggest problem with the movie is the soundtrack. The music itself is good, but not used well. For example, when Deborah flees into the mountains, you hear a sparkling and elated tune. I think this should be an exciting scene, but it doesn't have the right atmosphere. I also think the music belongs more to an American western.

There are a few small and well delivered jokes and on-liners in the movie. The best part of this is when Jeff arrives in town with his mule while he is sleeping in his hay wagon.

The acting performances are good. Especially of Richard Harrison (Jeff) and Rik Battaglia (Montana). Harrison has a cool gunfighter expression, but they made little effort to give it proper attention. 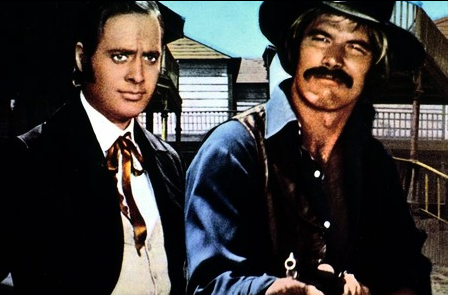 Director Tanio Boccia made 4 spaghetti westerns. Along with this movie I also saw Kill the Wickeds (1967), which I also enjoyed. I read that Tanio Boccia is called the ‘Italian Ed Wood’ after his dead. Based on these two movies I can say that he doesn’t deserve this nickname. And I don’t understand some of the negative opinions about Deadly Trackers (1972). I never had the feeling that this movie was made amateurish. Final verdict: 7/10

An entertaining film with a beautiful revenge story told in one long interesting flashback. The story never gets really exciting because it doesn't build up the right tension. Mainly because the music has the wrong vibe and too little attention is paid to the coolness of the main character (Richard Harrison). The plot isn't worked out well in the last half hour, so it loses some interest. But that’s rectified when we get to the finale after the flashback. Deadly Trackers (1972) has enough to offer with nice scenes, good acting and a few good one-liners. I would recommend this film to any spaghetti western fan.

Retrieved from "https://www.spaghetti-western.net/index.php?title=Deadly_Trackers_review&oldid=132061"
Category:
Cookies help us deliver our services. By using our services, you agree to our use of cookies.