The first time I watched this film I thought it an insult. How can such a good film be so bad? The opening, the ending, the feel is pure spaghetti. On the other hand, it felt trashy and cheap, with endless riding and ambushing along the same dirt roads. And I will to this day certainly not make a case it is a well-made film, because it is not. I only want to say it is one extraordinary and gloomy spaghetti western, not quite like any other genre contribution and right down my alley.

Men are riding at nightfall towards Red Ranch. Here an old man is just finishing reading from the Bible to a girl [i] and a young woman. A second woman is in the house. There is shooting outside. The man goes outside with the girl. They are shot dead. Four men run inside. A fifth man follows, carrying a wooden flute in a rope around his neck: Kimble. The women are raped by the four men and strangled. The rancher, Barton, comes back, finding only his daughter Suzy alive but traumatized. He buries his dead and goes after the killers. He runs into Kimble, who has left the gang and is waiting for him. Kimble tells him that he saw men pass by. Barton hires him on, as he is the only one who knows what the killers look like, for one thousand dollars.

This plot is often said to be lifted from Death Rides a Horse. I think it is more a counterpoint. It strikes a darker tune than that film. Kimble is not too late to stop what’s going on. He is right on time. While the women are gang-raped, he helps himself to a drink, playing his flute, watching. Kimble manipulates Barton to help him wipe out the gang. Kimble does not give himself away by accident, but knowingly or indifferently. And, unlike in Death Rides a Horse, there is no forgiveness in the end. 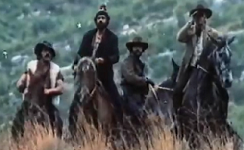 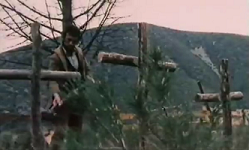 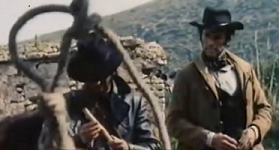 The story is not hard to follow. After the assault, Kimble asks Jim to tell the gang’s boss Ramson that he had enough. He only agreed to rustling horses. He will have nothing to do with killing defenceless women. He also threatens Ramson: “If the gang bothers me, it will be a pleasure to hunt all of you down as coyotes.” Ramson, hearing of this, decides to go after Kimble. So, Kimble keeps his promise, killing the gang members one by one, finishing it off by executing Jim, telling him to give his regards to the gang.

Kimble is an unusual spaghetti protagonist indeed, as nimble with a knife as with a gun, a troubled character with twisted obsessions, akin to the alienated protagonists of the film noirs. There have been some objections to the casting of Giuseppe Cardillo for the part. But I cannot see who else of the regulars could have done it. Also, Cardillo has drawn some humorous comments because of his likeness to Elvis Presley. Nuts, in those days we all looked like Mr. Presley, more or less that is, but of course you wouldn’t know that.

As for endless riding along the same dirt roads, I got that wrong. They are not the same. The film, produced by Angelo Pannacciò, is shot partly in Italy with Italian supporting actors and partly in Spain with Spanish supporting actors [ii]. This contributes a strange feel to the film, as well as to the confusion on who actually took part in the raid on Red Ranch. The Spanish parts are by the way shot back to back with another Pannacciò production, Una cuerda al amanecer, reusing many of the same actors and locations.

Pannacciò is also credited as director. But in fact, the film was written and directed by Luigi Petrini [iii]. Petrini confirmed this in an interview with Nocturno in 2008 [iv]. Petrini fell out with Pannacciò over the editing. Alessio Di Rocco, who interviewed Petrini, also gave him a 74 minute version of the film, and Petrini confirmed that he had directed all the scenes in it, although he didn’t see why it was “cut with a hatchet" [v]. 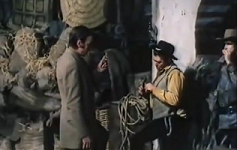 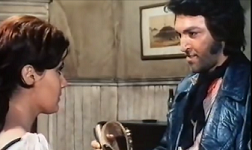 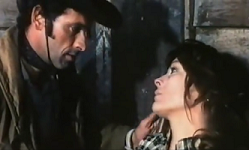 So, what we really want here is a director’s cut? I’m not sure about that. Yes, the film has its fair share of faults. But it’s not obvious what is due to Petrini’s script and what is Pannacciò’s editing. And there are some instances of real sloppy editing here. But they should not be confounded with the choppy editing style of Pannacciò, which just might suit this film better than the more conventional filmmaking of Petrini. What is obvious, is that it was made on a very small budget, if on a budget at all. When Kimble arrives in town to collect a bounty on some gang members, we hear saloon music. But there is no saloon! They probably could't afford one. Pertini said to Nocturno that Pannacciò didn’t have a lire.

Daniele Patucchi’s fine score is alternating between variations on the film’s moody song and some harsh passages like being played with a razorblade over barbed wire strings. Together with Girolamo La Rosa’s cinematography it conveys a sinister, almost gothic feel to the film. Released January 1972, it’s definitely uncompromising hard-core spaghetti. And, to my liking, the last effort of the filone of any real interest for almost five years, at least that I know of.

with thanks to Forum members Carlos and Jonathan Corbett for information and patient discussion.

Retrieved from "https://www.spaghetti-western.net/index.php?title=Death_Played_the_Flute_review_(morgan)&oldid=110285"
Category:
Cookies help us deliver our services. By using our services, you agree to our use of cookies.