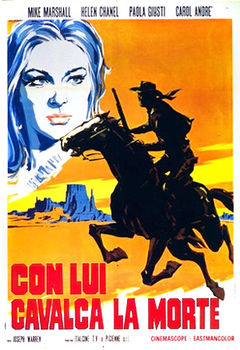 The second spaghetti western directed by Giuseppe Vari. It was virtually shot without a script. In a interview (1), Fernando Di Leo admitted that he was asked to write a script in great haste for a western that, so to speak, already was in production. He apparently consulted a few friends and they came up with this premise of a corrupt politician at the eve of his election, and the Pony Express rider in possession of papers that would compromise the seemingly honest man.

Mike Marshall is the rider, and his arrival is awaited by the henchman of the politician (Andrea Bosic). He’s tortured but not killed, and nursed back to health by a family of westerners, heading for California to search for gold. When healed, he steals one of their horses (and almost runs off with the daughter, 14-year old Carole André). During an assault on his life, the horse is killed, and again he is picked up by this family of westerners. The mother wants to see him hanged as a horsethief, but of course the lovely young daughter has fallen in love with him. In the meantime the politician and his wife (Hélène Chanel) have assembled an army of thirty hired guns and the famous gunslinger Luke Prentiss (Undari) to stop the Pony Express rider. Finally they all arrive in Sacramento on election day …

The finished product shows all the signs of a rushed work. Not only is Marshall not killed by Bosic’ henchmen, he’s not even searched (!) by them, even though he’s said to be in possession of compromising papers, and several of the constituent parts of the storyline feel a bit thrown-in. The family comes and goes, Marshall always crosses their path, and Undari’s evil gunslinger appears out of the blue, apparently because he was contracted for the movie without a script. But it really doesn’t matter. Con lui cavalca la morte (I’ll spend a few words on the title later) is by no means great, but it has a few redeeming qualities that make it worth watching. Vari shows his usual sense of style and some of this scratched collection of story elements, work remarkably well. Chanel is a villainess of almost Lady MacBeth proportions, deliciously evil, intriguingly sexy, shamelessly intriguing, and (noblesse oblige) unwillingly preparing her own and her husband’s downfall.

The Italian title is a reference to a line from the last book of the Bible, Apocalypse [The book of Revelation(s), 6:8] that is often referred to in westerns. It's circumscribed in Sergio Corbucci’s The Great Silence and read (by the gold-seeker's step-daughter) in Clint Eastwood's Pale Rider, to announce the rider's arrival in the imperiled community. In (biblical) English the line is:

"I looked and there before me was a Pale Horse, and His name that sat on him was Death, and Hell followed with him"

The man on the pale horse, the pale rider, is the man who brings death, death comes along with him. In biblical English: "death followed with him", in Italian: Con lui cavalca la morte (With him rides the death). So instead of Death Rides Alone, the most common English language title of this movie, it had better be called 'Death Rides Along'. 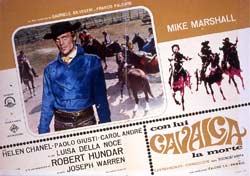 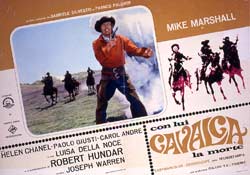 Retrieved from "https://www.spaghetti-western.net/index.php?title=Death_Rides_Alone_(Con_lui_cavalca_la_morte)_Review&oldid=123826"
Categories:
Cookies help us deliver our services. By using our services, you agree to our use of cookies.