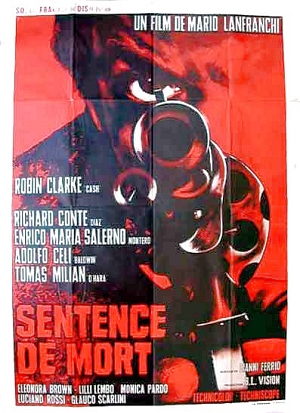 Structure is a pivotal part of film. If there is no structure, the film is bad. And if the structure is strong, the film is good. But who pays attention to structure anyway? It's not a very noticeable aspect, but in this film, it is. Death Sentence is structured rather differently. It is a vengeance film made episodically. And this, I believe, is the film's major strength. So to give you a taste of this structure, I will review it episodically.

A young gunman's brother is killed after the brother stole the loot from his partners after a robbery. The gunman is a drunk. But he sobers up so he will be able to hunt down and destroy the four men who killed his beloved brother.

Richard Conte stars as Diaz, a powerful yet generous Mexican land owner. Cash, the avenger, shows up to avenge the death of his brother. A large gunfight ensues. Diaz's henchmen are killed and Diaz is chased into the surrounding desert. He manages to disarm Cash but is slowly weakening as Cash has all the water.

This episode is very well made and constructed. With a good if uneven pacing. The Cabo De Gada sand dune locations add a sort of mythic feeling to the episode. The action scene is fast and exciting and has a feeling of Massacre Time to it. The conflict is handled well with Cash mentally torturing Diaz with the water. There is a lack of logic in this episode as Diaz is fleeing from the unarmed Cash while Diaz has two pistols. This, I suppose, just adds to the physcolgical aspect of this pretty grueling episode. I say grueling because it deals with dehyration which is always hard to watch. You can almost feel the heat rising from the dunes.

The acting by Conte is good. You actually feel sorry for this "villain" as he seems to live a peaceful, law abiding life after his crimes. But the skillfully placed flashbacks might make you think twice. Clarke is good as a snide, cool anti-hero. He is unrelenting and unforgiving. He never loses his cool even when frying in the desert.

After finishing Diaz, Cash travels to town to his next victim, Montero, a professional gambler. Montero (played by Enrico Maria Salerno) has a reputation as being unbeatable at cards. Naturally, Cash must challenge him to cards to get into his head. He beats Montero. Taking all his winnings from the previous game. But Montero is a sore loser. They meet again for another game, only this time, the stakes are higher.

This episode is a complete change of pace from the first. It is somewhat hard to get into it as it starts a little too abruptly. Right in the middle of a scene. But it is perhaps a little more atmospheric than the first episode. It is also more stylish and closely resembles the style and feel of Colizzi's God Forgives... I Don't. With the jazzy score and well filmed poker games that are more realistically filmed than other spaghettis. The conflict is a little more psycological than the first as it isn't as physically oriented. Cash's cool, calm, collective nature sort of throws Montero off. Making him a little uneasy. And his speed with the gun doesn't help that.

The acting is as always good. Salerno's unemotional performance fits his character well. Adding arrogance to his character. He is less pitiable than Conte but doesn't show too much evil. Though he certainly isn't likeable. Clarke is even more calm and collective than in the first. But he actually does lose his cool near the end. Showing more emotion to his character.

After Montero disappears from the picture, Cash travels south to a small Mexican village under the oppressive rule of a cruel, fanatic priest, Baldwin, who's blood atonement policy has not made him too popular. He rides with a gang of identically dressed black clad riders. Cash enters the village with his guns concealed. But after they are discovered, he is tortured, shot and left to die on a mountain side outside of the village. With no ammunition to face the Baldwins save for the bullet in his leg, Cash has to bite the bullet and dig that bullet out, load it up and face Baldwin.

This is another change of pace. This episode is far more allegorical than the first two. We have an evil priest and a gang of black clad gunmmen. Probably portraying the Fascists who were known as black shirts. The Mexican peons clearly representing the "oppressed" Italian populace. But this is probably the weakest episode. It is more inventive but somewhat boring. The conflict is not as psycologically oriented. But it is a pretty violent episode as Cash must dig into his leg with a rock to extract a bullet! But the logic is seriously lacking. What is Baldwin's motivation? He even burns down the village out of forgiveness! But where is he going to live afterwards? But it is a well made episode that is still not too bad.

The acting from Adolfo Celi is good. He is convincing and truly vile as a despotic priest. His curious appearance also helps his villainous performance. Clarke spends most of this episode lying on a mountain side in serious pain. Which he pulls off greatly. When he is shot, his reaction is so intense, it looks as if he really was shot. His performance was helped by the fact that director Lanfranchi had sent Clarke's girlfriend back to New York after the couple's constant arguments began to slow production. This angered Clarke and seems to have given him the right frame of mind.

Genre method actor, Tomas Milian appears as the 4th and final villain, O'Hara. Cash rides into another town which is in the grips of poverty. Cash reopens the bank to draw in O'Hara who's obsession with gold has led to the closing of the bank. O'Hara's men are killed by Cash and he beats a retreat back to his home and prepares for another go. But Cash has a secret weapon, a blond. O"Hara's weakness.

This final episode is a great way to end this picture. It also has the most interesting Villain. An epileptic albino with a gold fetish. The conflict is far more action based than psycological as the two enemies almost never have time for any conversation. Less talk more shooting. The finale, set in a deserted mountain top tomb, is especially effective. The pacing here is great as well. The suspenseful waiting before the gunfights is somewhat Leonesque but handled differently. Romance is present in this episode as well. If only slightly. A great way to wrap up this engaging revenge story.

The acting is a story in itself. Tomas Milian gives what is quite possibly his most over the top performance yet. His wild fits go way too far but as always, it's a pleasure to watch this guy act. Clarke plays the same Cash we saw in the last three episodes. Milian's death is also one of the most over the top death scenes I've ever seen.

The film's episodic structure makes this very engaging. It keeps the pace going constantly and draws your attention. The four episodes are all very ironic and well made. With a strong emphasis on psycological battle. A criminally underrated film that sits unfairly obscure in the image of the many other Spaghetti Westerns.

Retrieved from "https://www.spaghetti-western.net/index.php?title=Death_Sentence_Review_(Korano)&oldid=48105"
Category:
Cookies help us deliver our services. By using our services, you agree to our use of cookies.