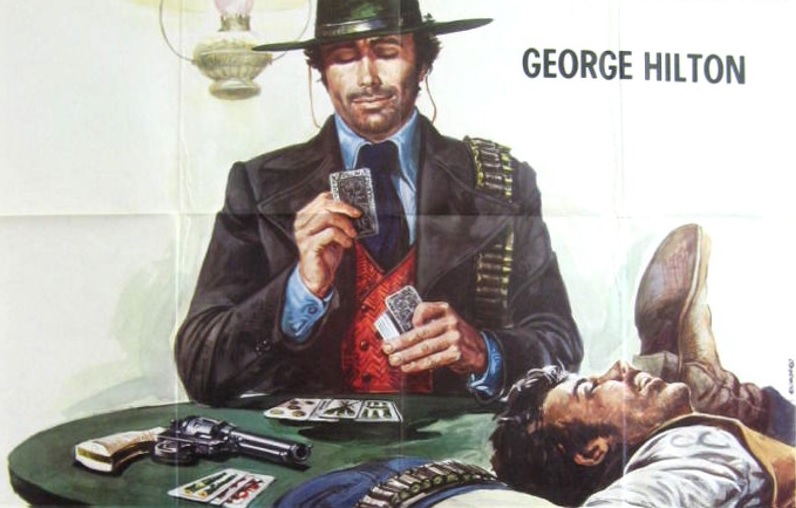 1974 rode on the tail end of the Spaghetti Westerns lifespan, few were being made at this point, and those that were being made were either low budget schlock or comedies. Many of the original genre directors and actors were abandoning ship, moving to work on Giallo or Poliziotteschi. It was in that year that Giuliano Carnimeo created Di Tresette Ce N'è Uno, Tutti Gli Altri Son Nessuno (a.k.a The Crazy Bunch), his last Spaghetti Western.

Like most of the stragglers in the genre Carnimeo had gone full comedy at this point. His usual mixture of violence and comedy slowly became just a straight smothering of slapstick nonsense following somewhere alongside the Trinity films. Despite this change of genre, he proved that his creativity wasn’t diminished at all. There’s plenty of interesting moments, but I wouldn’t say The Crazy Bunch is really funny in it’s own right. I think most of the humor comes from just how fucking bizarre It is.

Tricky Dicky and Bambi are looking for one hundred thousand dollars in stolen money, but so are Frutti Tutti and his gang (including for no reason a one eyed, pirate hook handed scotsman). They find out the money is stored in a deposit box and needs a specific key to open it, the only person who knows where the key is is Frank The Fairy, who stole the money from Frutti Tutti. After tracking down Frank The Fairy in an insane asylum, they learn it’s in the town of Cactus River where Frank The Fairies cousin Drakeman (the world's greatest one man circus) has it. Shenanigans ensue when Tresette and Bambi find out the town is also overrun with politician obsessed KKK members. They soon find out the key is not actually with Drakeman but on the keyring of one of the asylum doctors. So… they go back to the asylum find out Frank the Fairy took the money out of the deposit box and is in his hideout with his gang. Twenty minutes is devoted to Tricky Dicky and Bambi beating the shit out of his gang until they blow Twinkle Toes to hell with a cake and the end credits role.

I said before Carnimeo has good ideas throughout the entirety of the film, there’s interesting characters and situations that Hilton and Huerta interact with, but I think where most of the real magic happens is in that first half of the film with the asylum. Bambi poses as the Archduke of Austria and Tricky Dicky poses as an Austrian psychiatrist looking to cure the Archduke of any ideas about Democracy. The method of treating Democracy says Tricky? Electroshock therapy of course. After sending Bambi away Tricky wanders around the asylum looking for Frank the Fairy, dealing with a man who thinks he’s the statue of liberty (and another man taking liberties with the statute), the colorado express and a man delivering invisible coffee. The film stays here for about twentyfive minutes, but honestly I think The Crazy Bunch should have stayed in the asylum. There were so many potential nuggets that could have been dredged from this setting that Carnimeo could have had a damn gold mine. The rest of the film is mostly a bunch of slapstick nonsense and confusing wordplay. There’s maybe a couple good moments here and there (the beginning which parodies Trinity Is Still My Name is a fun few minutes), but It got to the point where I just rocked back and forth in my chair and checking how many minutes were left in the film, especially towards the end where it’s non stop beating poor Nello Pazzafini. I will admit the politician obsessed KKK members were a rather funny choice, but mostly because of the dubbers tip-toeing around the obvious censorship (it is funny once the Klan members discover they’re dealing with Tricky Dicky himself though). Some of the fights might get a chuckle out of you, though the overabundance of obvious sped up footage looks a bit wonky at times and definitely ages the picture.

The Crazy Bunch is a definite step down in quality from Lo Chiamavano Tresette. The film feels a bit lazy, the constant ideas and characters Carnimeo presents just feels like he flung shit at the wall to see if it stuck. Some of it did, but most of it fell flat on the ground and stunk. I keep saying that I like his ideas, but he introduces so much here that it becomes a bit of a run on sentence that doesn’t end up with anything interesting or of any substance. It’s a literal case of “What can I get away with?”. The hilariously offensive dubbing of the first film is missing here too, the crew attempts to capture some of the magic but I guess they were either told to tone it down or lost wind. Regardless of the missing crudeness they do a fantastic job with what they have however and I applaud them for their work. They really do make the film a lot more enjoyable with their performances. One other small gripe I have is that we’re treated to a large amount of the film being handheld rather than the nice smoothness of the previous films. I believe this is largely in part due to Stelvio Massi not being on the film and a man named Federico Zanni taking the helm. Zanni doesn’t do a bad job, but it makes the The Crazy Bunch feel a bit lazy and rushed compared to it’s predecessor.

The magic of Tricky Dicky’s first outing is lost here, and I was extremely disappointed by it. If you want to be disappointed too, watch this movie on amazon. You can rent it for two dollars. That’s about as much as I’d pay for it to be honest. Image quality is about as good as the first Tresette. Sound is just as good too. Really all I can say.

When translated into English, “Di Tresette Ce N'è Uno, Tutti Gli Altri Son Nessuno”, becomes “Like Tresette there's only one, all the others are nobodies” Uno And Nessuno are supposed to rhyme. (I just saw this in the forum topic, all credit and thanks go to Scherpschutter for the translation and Stanton for putting it at the top so I didn’t have to scroll to far too find it).

Retrieved from "https://www.spaghetti-western.net/index.php?title=Di_Tressette_ce_n%27è_uno,_tutti_gli_altri_son_nessuno/review&oldid=122612"
Category:
Cookies help us deliver our services. By using our services, you agree to our use of cookies.