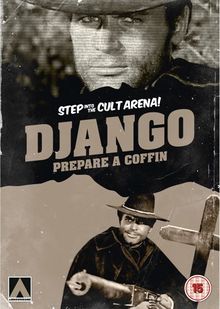 Django (Terence Hill) is double crossed by his ambitious politician friend David Barry (Horst Frank) as the latter organises a gang of bandits to stage a series of robberies. One of these robberies is of a wagon full of gold being driven by Django and in its course our hero’s adored wife is killed, while he is wounded and left for dead. Five years later he is working as a district hangman but is secretly using his position to build a private gang of phantom renegades who he plans to use on his quest for revenge. Their immediate target is the bandit gang’s leader, Lucas (George Eastman) but things soon go astray and Django has to overcome another betrayal before his final showdown can be achieved.

In search of a lookalike replacement for Franco Nero who was originally signed to make this film but who had flown off to Hollywood instead, director Ferdinando Baldi presented Terence Hill to producer Manolo Bolognini and the relative newcomer’s likeness to Nero was sufficient to get him the part. It proved to be a fine choice and Hill’s physical resemblance is more than matched by his strong performance in the role of the vengeance seeking hero. Like his appearance in the previous year’s God Forgives…I Don’t, this is Hill in serious mode and is a very different image to the light comedic parts which made him such a success a few years later. It is a style, however, which suits him well and for all of Trinity’s charms I find I prefer him in parts such as these.

The film itself is probably the closest to a genuine Django sequel or prequel that was ever made but, in truth, has sufficient continuity holes in relation to the original to ensure it can never really be taken completely as such. It does have a Django ‘feel’ to it though and has the machine gun and coffin scene to cement its claim. Like the original it also boasts two villains and the twin talents of George Eastman and Horst Frank are a happy bonus indeed. Eastman exuding malice as the swaggering outlaw boss while Frank maintains the usual level of malevolent arrogance that made him such an icon of European westerns.

Add in a catchy theme tune and a fine score that also reuses a bit of Morricone for good measure and you have a very solid little serving of Spaghetti which is never less than entertaining and ticks more than enough boxes to warrant return viewings. I’ve always enjoyed it and seeing an improved English friendly DVD of it has only added to its appeal.

The UK has been largely Spaghetti starved in terms of quality DVD releases over the years so Arrow’s launch of Django, Prepare a Coffin is a very welcome event indeed. What is equally welcome is the standard of picture quality as, despite most of us assuming that such things are a minimum standard in our digital age, there are still many films hitting the DVD and Bluray shelves which have had little or no effort put into them to bring them up to viewing scratch. Thankfully, this release looks crisp, clean and very watchable. There is a small issue with slight cropping of the frame top and bottom (see first screenshot below for a good example) but this is minimal to be honest and is offset by the extra frame included on either side. Presumably this was a decision based on fitting an exact 1.78:1 ratio so is understandable although I would have preferred a slightly squarer frame that included everything intended. I used my Danish Carat version as a basis for comparison and found that Arrow’s was noticeably better. The colours benefited from being a little warmer and the clarity of image was markedly improved.

The Arrow release also has the added benefit of both English and Italian dubs with English Subs available. Which dub you may prefer depends largely on taste and in this case either could be considered ‘original’ as it is obvious that various cast members are speaking both languages equally. George Eastman can be seen mostly speaking Italian, for example, while Horst Frank and Terence Hill are clearly speaking English. Personally, I like the film in both dubs and suspect I’ll switch between them on a whim with future viewings. The sound on both dubs is clear, with no background hiss discernable on my TV.

This release is somewhat light on extras unfortunately with only a trailer as any bonus material. An interview or two would have been very welcome or even some more trailers but, as recompense an 8 page booklet on the film has been included written by Howard Hughes which does add some interesting material on the background of the production as well as some nice location information. Anything from Howard Hughes is always welcome and this is a nice inclusion from Arrow.

All in all this is a very good quality release. The picture quality is of a good DVD standard and it is a very welcome addition to a very sparse UK list of available Spaghettis. Here’s hoping that sales are sufficient enough to warrant more of its kind hitting the shelves here. Certainly, if you are looking for an English friendly release or just an upgrade from the existing ones I would recommend it highly.

As a curious postscript to this, I should mention that Arrow have also put out a vanilla edition already which seems to be available only in Sainsbury supermarket stores. It sports a different generic gunslinger cover and has no booklet but is otherwise identical in terms of the disc’s content. More importantly, it is selling a lot cheaper so if you have a tight budget and are located in the UK you might want to pick this up instead. It is not, at this stage, available online anywhere that I could see.