Django & Django is a 2021 documentary by Steve Della Casa and Luca Rea about Sergio Corbucci that premiered at the Venice Film Festival. The documentary features archival interviews with Sergio, as well as newer interviews with Ruggero Deodato, Franco Nero and Quentin Tarantino. 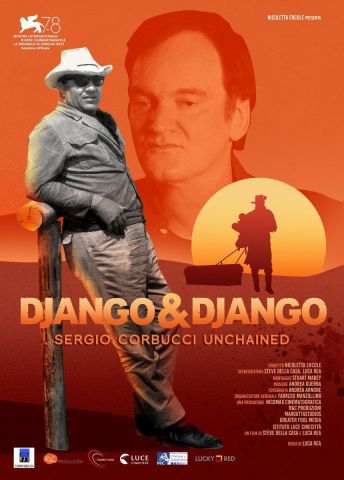 Synopsis (Source: Biennale Website)
According to the exceptional storyteller Quentin Tarantino, Sergio Corbucci was “the second best director of Italian westerns,” as a character declares in his recent movie Once Upon a Time in Hollywood and as was confirmed by his choice to base Django Unchained on a film made by Corbucci in the 1960s. Previously unseen material from the time, testimonies and reconstructions used to present a unique period in cinema. Django, Il grande silenzio, Gli specialisti, Il mercenario, Vamos a matar compañeros, Cosa c’entriamo noi con la rivoluzione: Corbucci’s westerns as cinema of cruelty, but also as great inventiveness and as metaphor for all the ideas that were circulating in the Italy of the 1960s. With testimonies from Franco Nero (Corbucci’s favorite actor) and Ruggero Deodato (assistant director on Django), with unreleased Super8 films made on the sets of the Roman director’s movies and with images from the years in which Italian cinema was able to speak to the whole world. And with animations that reconstruct a climate, a spirit, a way of living and conceiving cinema.

Statement from the director (Biennale Website)
With this film we wanted to pay homage at one and the same time to a great director of the past (Sergio Corbucci) and a great contemporary director (Quentin Tarantino), recounting a great period in Italian cinema with the sensibility of today. We have worked on memory, looked for unreleased material and made room for storytelling and passion. We wanted to look back at another time without nostalgia, but with affection and with the same sense of fun that is characteristic of the two directors to whom we pay tribute.

Retrieved from "https://www.spaghetti-western.net/index.php?title=Django_%26_Django&oldid=128268"
Categories:
Cookies help us deliver our services. By using our services, you agree to our use of cookies.