Everything you always wanted to know about Django, but were afraid to ask ...

A cowboy without a horse

The character was created for the 1966 movie with the same title, directed by Sergio Corbucci. Like Sergio Leone’s A Fistful of Dollars, it was inspired by Akira Kurosawa’s Yojimbo. Script-wise Django deviates more from Yojimbo than the version presented by Leone in A Fistful of Dollars, but Corbucci wanted the character of Django to be closer to the ronin, the masterless samurai from Yojimbo (and many other samurai-movies he had studied). For this reason Django was denied a horse. He enters the movie walking, trailing a coffin through the mud, carrying his saddle on his shoulder.

Unlike Sanjuro (the samurai from Yojimbo) and the Man with no Name, Django is not a passer-by who stumbles upon a situation that, for one reason or another, attracts his attention. He is a man with a mission, and the mission is: revenge! He’s a veteran from the Civil War (it’s strongly suggested he fought for the Union) and his wife was killed – when he was far, too far away – by the racist Confederate Major Jackson. He’s also a bit of a conjurer: outnumbered by his opponents in the main street, he outsmarts them by whipping out a machine gun from his coffin, and after his hands have been crushed, he miraculously balances his handgun on a metal cross. With his black cloak and dirty tricks he is like no other cowboy had ever been in the history of filmmaking. 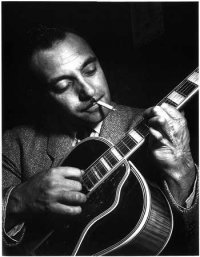 Although he is a character in the tradition of Sanjuro and No Name - characters without a proper name - he got a name: he was called Django after the legendary jazz guitar player Django Reinhardt. In the Romani language – Reinhardt was a gypsy - Django means ‘I awake’, but there’s no evidence that this meaning was of any influence. It's more likely that Corbucci was fascinated by the 'symbolism of hands': An earlier movie, Minnesota Clay, had featured a gunslinger who went blind, and now Corbucci wanted to make a movie about a gunslinger who couldn't use his hands. It seems logical that a handicapped gunman would be called after a handicapped musician. When he was 18 years old, Reinhardt was injured in a fire; his right leg was paralyzed and the third and fourth finger of his left hand suffered third degree burns. It was thought that he would never play the guitar again, but he learned how to play all guitar solos with only two fingers.

Django was played by Italian actor Franco Nero, who was only 23 years old at the time. He was therefore dubbed by a voice actor (37-year-old Nando Gazzolo) in the Italian version to make him sound older. According to Mark Damon, who had appeared in Johnny Oro, Corbucci wanted him for the part, but was convinced by producer Bolognini and his wife Nora to accept Nero. In several countries Django met with some serious censorship problems, and it was banned by British censors until its video release in ’93. The lasting success of both the film and the character are therefore remarkable. Django was so popular that several films were re-titled in order to cash in on the fame of Corbucci’s movie; in Germany every cowboy with a gun and a mission was called Django in those days.

Franco Nero would only return once as Django, in the only official sequel, Django Strikes Again, made 22 (!) years later, in 1987. It stars Nero and his character is called Django, but otherwise it has little in common with the original movie. The list of films in which references are made to Django, is endless, varying from the ear severing scene in Quentin Tarantino’s Reservoir Dogs, to the film being watched in The Harder they come (1972, Perry Henzell) and the character Jango Fett in the Star Wars saga. The character would appear (and still does) on a regular basis in rock videos, video games and anime. Roberto Rodriguez The Mariachi trilogy is a sort of rewriting of the Django myth, postmodern style. The Japanese movie Sukiyaki Western Django is a super hip, super cool homage to movie and character. In 2012 Quentin Tarantino made Django Unchained, in which the black-clad hero was turned into a black (Afro-American) hero, a freed slave looking for his wife in the American South, on the eve of the Civil War. Franco Nero has a cameo in the movie as an owner of a slave engaged in 'Mandingo fighting'. Today, fifty years after Corbucci created the one and only, Django is more alive than ever. 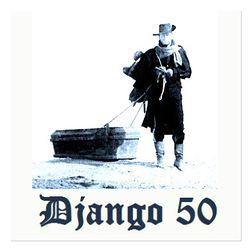 Numerous spaghetti westerns, made in the second half of the sixties, feature a character called Django who either shows little, some or no similarities at all to the original character, other movies carry only the name in the title. In Italy such movies are called "Sotto-Django" (Under Djangos). A selection: 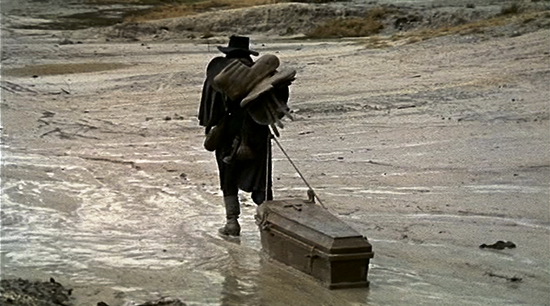 Simon Gelten is a long time contributor to the SWDb. "I'm not as old as Tom B. but I'm working on it. I hope to catch up with him by the end of the next decade.", he says. Simon saw all movies by Sergio Leone and several by Sergio Corbucci in cinema, most of the time in Eindhoven, the city where he was born. Currently, Simon is living in Turnhout, Belgium. Simon is active within the database as both Scherpschutter and his alter ego Tiratore Scelto.
Retrieved from "https://www.spaghetti-western.net/index.php?title=Django_(character)&oldid=137646"
Categories:
Cookies help us deliver our services. By using our services, you agree to our use of cookies.