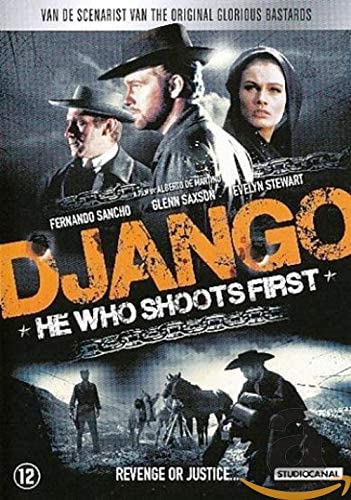 Don't ask what your genre can do for Tarantino, but ask what Tarantino can do for your genre. Quite a lot, actually. In Holland, where spaghetti western releases are as rare as tropical temperatures, two Django movies (or at least two movies with the name Django in the title) were released in the wake of Django Unchained: a re-release of Sergio Corbucci's original Django, and Alberto De Martino's Django Shoots First, never released on DVD before in the Orange nation.

Released in 1966, only four months after the original, this was one of the first unofficial Django sequels, that is: a film with 'Django' in its title, but not really featuring the character. The hero from the movie is called Glenn Garvin, and when he's asked where the name Django comes from, he says the Mexicans have baptized him Django for some inexplicable (most probably financial) reason. Django/Garvin is played by Glenn Saxson, in real life Roel Bos, a Dutch actor and producer who had a short-lived career as a blond action hero in Italian genre movies.

The opening scene is quite remarkable. While eating a few beans, Django - sorry Garvin - is joined by a bounty hunter who 's on his way to town to collect the bounty for the person he has shot only minutes before. The two men have a chat, but then Django discovers that the victim is his own father. He shoots the bounty hunter, starts digging a grave for his father, and ... has second thoughts: his father is worth $ 5.000 and it would be a pity to throw so much money away ... So Django takes his father's dead body into the town of Silver Creek and collets the bounty of $ 5000 himself! Incidently, the name of the bounty killer is Ringo, so the opening scene offers a clash of titans: Django versus Ringo!

Django Shoots First doesn't take itself too seriously. Unlike the original character, played by Franco Nero, Saxson's Django is a cheerful type, almost a jolly good fellow, with a good sense of humor and a keen eye for the ladies. Fernando Sancho (for once a good guy) plays a man so crazy about money that he hangs around in the local bank to inhale the smell of it, and there's also a mysterious man in a cloak who seems a cross between Colonel Mortimer and The Penguin from the Batman series (I'm not kidding). We even get to see Django as a drag queen, in a scene so bizarre that for a moment I couldn't believe my eyes (screenshot 4). And yet it is not a full-blood comedy. There are several well-staged, robust fistfights and a few gunfights as well.

The movie originates in the plans to turn Alexandre Dumas' The Three Musketeers into a spaghetti western, with Saxson playing D'Artagnan and Ida Galli as a sort of Milady De Winter. This might explain the truly gorgeous costume design for the movie, and the sumptuous look of some of the interiors. In combination with Ricardo Pallatoni's wonderful cinematography, this all gives Django spara per primo the feel of a high budgeted production, while in fact it was a rather modest affair. It was made back to back with the Gemma vehicle Fort Yuma Gold (Enzo G. Castellari coordinating some action scenes for both movies) and most money went to Ringo's Yuma instead of Django's Musketeer.

The cover says the movie was scripted by the screenwriter of the original Inglorious Bastards (that is the Enzo G. Castellari movie from 1978 which served as a - false - model for Tarantino's Inglourious Basterds). Apparently this is a reference to Sandro Continenza, who was only one of the five or six screenwriters for Inglorious Bastards, but never mind: they're trying to squeeze every Quentin out of Tarantino in order to sell the product.

There have been complaints about the Aspect Ratio of previous releases of the movie using the StudioCanal print: only the pre-credits sequel was shown in 2,35:1, while the rest of the movie was in 2,29:1. This release has the same AR thoughout the entire movie, but it seems a little under 2,35:1, so I guess it is a little cropped left and right (look at the screenshots). Most television sets have overscan, so you won't notice anything. The image has been enhanced for widescreen TVs and looks remarkably clean for a genre movie of this age. Colors are strong but quite a lot of digital noise reduction was used, so the image does look a little soft most of the time. But it's a good transfer, a pleasure to watch. The Italian audio (note that the box says the audio is in French!) is clear and I didn't notice any flagrant mistakes in the subtitles. There are no extras on this disc. 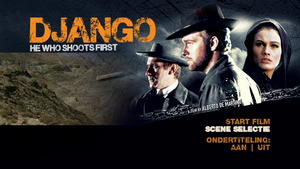 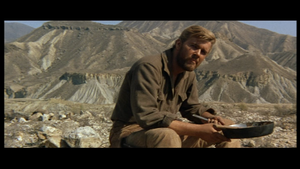 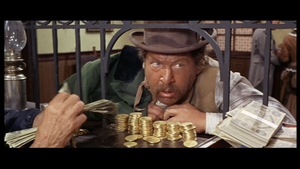 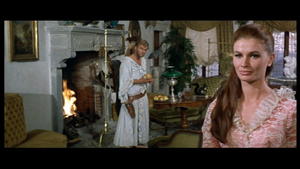 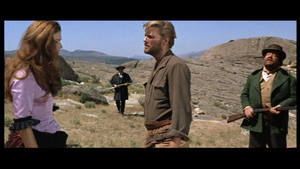 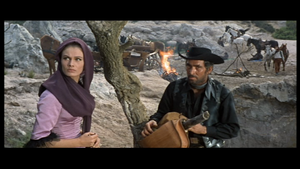