Review of Django Against Sartana (1970) aka Django sfida Sartana 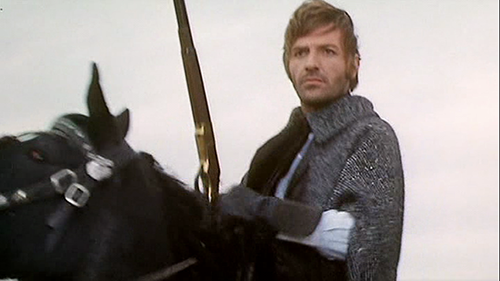 Filmmakers have always tried to pair up iconic film characters from two different movie franchises into a single film, with mixed results. While these joint ventures are potentially lucrative, critical reception is another thing entirely. Frankenstein meets the Wolfman, King Kong vs Godzilla, Yojimbo vs Zatoichi, Freddy vs Jason, and Alien vs Predator are but a smidgen of these "crossover" films that have graced the big screen. The Spaghetti Western genre is no stranger to the crossover film and several films have embraced the idea of pitting two of the Spaghetti West's greatest heroes against one another. Django against Sartana, not to be confused with the infamously derivative Demofilo Fidani film One Damned Day at Dawn, Django Meets Sartana (1970), is actually one of the better crossover films in the genre, which of course is not saying much. Wild East has released this on DVD along with Sartana's Here, Trade your Pistol for a Coffin. 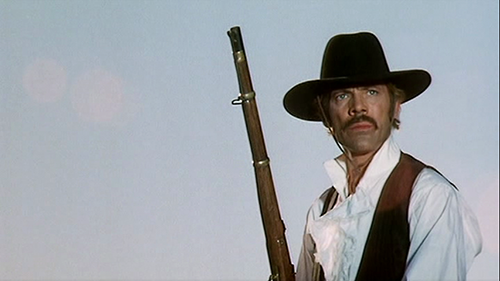 Tony Kendall plays Django, a bounty hunter who has spent months tracking down bandits and cleaning up the territory. He comes home to find that his bank employee brother Steve, has been framed and hanged for stealing from the Bank’s secret safe. I thought it weird that Django would have a brother named "Steve". Upon hearing that the notorious gunman Sartana, played by George Ardisson is the man behind both the robbery and his brother’s death, Django vows revenge and confronts Sartana. After engaging in a lengthy fistfight with one another, cooler heads eventually prevail and they come to a mutual understanding that Sartana was not responsible for the death of Steve. Django and Sartana proceed to form an alliance to find out the truth and bring the real culprits to justice, with Django out for revenge, and Sartana out to clear his name. There are a couple minor gaps in logic but for the most part, the plot is surprisingly coherent and we get a minor twist at the end. 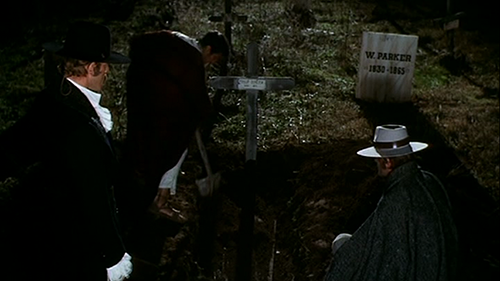 A visit to the graveyard

As with most of these unofficial Sartana and Django sequels, little attempt is made to have the characters resemble their original namesakes. The film teams up Tony Kendall and George Ardisson. The pair might not hold a candle to Franco Nero and Gianni Garko, the stars of the original Django and Sartana films respectively, but that’s not to say they aren’t any good. Tony Kendall, perhaps best known for horror films like Return of the Evil Dead (1973), Mario Bava’s Whip and the Body (1963) as well as the Kommisar X Euro-spy films plays the Django character very clean cut. Sporting no facial hair and being about as morally upright as a Spaghetti Western hero gets, he is the classic "white hat" hero. Kendall is no Nero, but he nevertheless does a good job, showing more depth in his acting than is to be expected. George Ardisson on the other hand plays Sartana with more of the amoral, anti hero flavor that the Spaghetti Western genre is known for. He looks pretty gritty and tough, and has obviously come a long way from playing Reg Park’s youthful and boyish sidekick in Hercules and the Haunted World (1961) almost a decade before. Spaghetti Western regular Jose Torres, who normally has bit parts playing Mexican bandits is cast in an all too rare good guy role. Additionally, he also survives! He gets third billing, playing the knife throwing mute and loyal friend to Django. 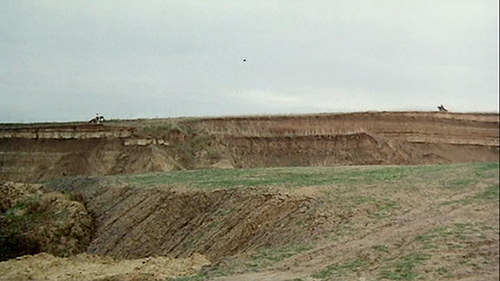 A nice shot of Django and Sartana jousting

The film is written and directed by Pasquale Squitieri (as William Redford). Never heard of him? I don’t blame you, but he is a little known but underrated director who hold the distinction of directing Claudia Cardinale in a total of 9 features, the most famous being I Am the Law (1977) with Giuliano Gemma. He also directed the decent Spaghetti Western, Vengeance Trail (1971). His directing in this feature could’ve been better however. The film suffers from a number of weird, abrupt cuts when transitioning from one scene to the next. Also, the fistfight scenes are filmed with an awkward POV, handheld, shaky cam technique, which would have made even Gary Ross, director of The Hunger Games, blush. Additionally, there are a lot of filler horse riding sequences at the beginning, and the locales are pretty bland too.

A laughably terrible scene involves the female bad guy, played by Mirella Pamphili, being trampled to death by horses’ hooves. But get this, the hooves are nowhere near her! She is lying on the ground squirming and screaming, as if acting in mime, pretending to be trampled by horses but ending up looking more like she is possessed, Linda Blair style. But wait, it gets even worse! The good girl that Django and Sartana rescues, played by Adler Gray, upon witnessing this gruesome "death", proceeds to sort of tilt her head sideways, hold her head with her hands, and scream. It may very well be the worse acting I have ever had the pleasure of witnessing in a Spaghetti Western, and that is saying a lot. In another sequence, a bad guy wielding two pistols gets shot by Django. What follows has to be seen to be believed. The guy actually re-holsters his weapons before dying! Another scene involves Django tied up and shot in the legs some 7 odd times with a Winchester, yet after he is rescued by Sartana, is apparently none the worse for wear for his injuries.

The music by Piero Umiliani is mediocre, complete with nonsensical English lyrics to the theme song. 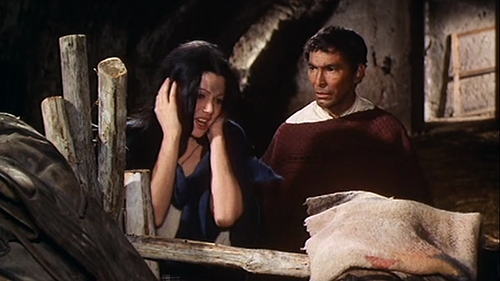 Even Jose Torres cannot believe how bad her acting is

The prospect of a film that has two of the most famous heroes of the Spaghetti West teaming up, might have sounded good to some movie goers back in the day, while more cynical movie buffs would instantly scoff a film like this as little more than a cash grab knockoff. And while the later view is probably more correct, the film is not without merit. As long as you don't go into this movie expecting something special like Clint Eastwood and Lee Van Cleef's tag team in For a Few Dollars More, you might actually enjoy this for what it is.

Honestly, I was expecting a Fidani-esque Z grade western here. Thankfully this film, while not even close to being a masterpiece is still a notch or two above than the aforementioned One Damned Day at Dawn. The best way I can sum up this film is that for a Django and Sartana knockoff, it is perhaps a better film than it needed to be.

Retrieved from "https://www.spaghetti-western.net/index.php?title=Django_Against_Sartana_Review_(by_Len_Liu)&oldid=132622"
Category:
Cookies help us deliver our services. By using our services, you agree to our use of cookies.