At least the Italian, German and English titles of this movie are impressive (even if they sound a bit silly), otherwise it's a low-ultra-low-budget affair. Fidani actor Jeff Cameron is a feared bounty hunter (at least that's what we're supposed to think) on the trail of the four Cortez brothers. We also get a poor man's version of Bud Spencer's Bambino, a saddle wielding brute called Pickwick. No, that was not a mistake: he actually uses his saddle as a blunt weapon. One of the Cortez brothers is a sister, played by the gorgeous Brazilian actress Esmeralda Barros, and we also get french actress and model Dominique Badou and former Italian beauty queen Angela Portaluri, who once represented her country at the Miss World pagent.

The movie is shown in its original aspect ratio of 1,85:1 and was digitally remastered from the original negative. Video quality is stunning. The image is razor sharp and colors are vivid and strong. There are two audio tracks, German and English. They both do the job well, but I detected some minor echoes on the English language track, as if the voices were recorded in a grotto. But maybe it was intentional, at least a part of the movie is set in a grotto. 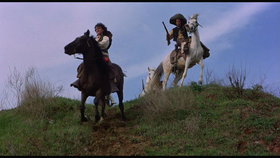 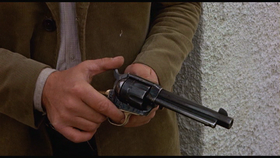 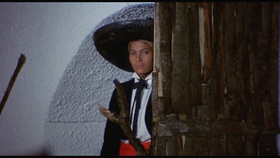