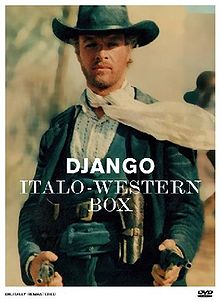 This DVD is published in Germany by Koch Media. (Region 2) The DVD offers English subtitles.

All three are completely uncut and remastered. Missing German dialoge is presented in Italian with subtitles.

Just like the Sollima box, this box is conceived as a digipak fold-out containing the discs and all that in a drawer. The box (while the cover image might not be such a great choice) looks great. The Menus are great and a huge step forward from the previous Koch DVDs.

The box offers German and Italian audio on all three films in Dolby Digital 2.0 (with optional German or - which is not noted on the box or on the website - English subtitles). The Quality is good to average, with some glitches here and there but overall pretty impressive for the age. Sometimes the audio gets too hollow and dark, and then clears up again. It's definitely not perfect, but good.

Apart from Execution , the films are presented in cinemascope (2.35:1 enhanced for 16:9 displays, Execution is 1.85:1) that look pretty good, if not too good for such low-budget films as these. The colors are great and there's enough detail. Occasional glitches and some darker pictures are there, but nothing grave. 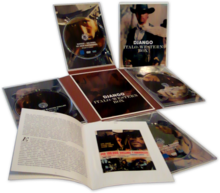 The two Garko films offer great entertainment and loads of typical Spaghetti Western action. Some cool characters and nice stories make those films a nice experience. Execution is somehow off that track, not only because of the cast but also regarding the Quality. All in all, the three films are nice representatives of their genre and a must-see for the true Fan. With this box, Koch Media proves again, that they're the leading company in Spaghetti Western DVD Producers. Nice Artwork, cool extras, really good video transfer. The three films come across as nice as never before, if only the sound would've been a tad better, but there's nothing to worry. This box is absolutely recommended für fans, because the films do entertain and the box is yet another treasure in the portfolio of Mr Bruckner and his team. Keep up the good work, Koch Media!

Retrieved from "https://www.spaghetti-western.net/index.php?title=Django_Italo-western_box_review&oldid=108772"
Categories:
Cookies help us deliver our services. By using our services, you agree to our use of cookies.