Django Kill, If You Live, Shoot! Review B

From The Spaghetti Western Database
Jump to: navigation, search
FILM IS IN THE TOP 20 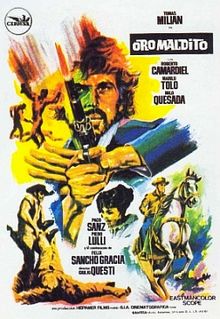 Django Kill, if You Live, Shoot! (1967) directed by Giulio Questi and starring Tomas Milian, is probably one the most bizarre and strangest Spaghetti Westerns ever made. Yet the screenplay, by Franco Arcalli and Giulio Questi, at first glance, seems to travel the same well trodden path of many other Spaghetti Westerns:

Milian (who is simply called the Stranger) is double crossed by Oaks (Piero Lulli) when his gang raids a Wells Fargo stagecoach guarded by the US army; shot, buried and left for dead; he climbs out his grave with the help of two Indians and seeks revenge on his fellow thieves. They are to be found in a nameless town run by a black clad bandit and his men, who battle against the murderous inhabitants, who kill Oaks, to claim the gold for themselves.

It begins very strangely: a hand sticking out of the ground as Milian seeks to free himself from his shallow burial; a flashback soon kicks in, and apart from some brilliant, razor sharp editing courtesy of Franco Arcalli, it appears we are in normal territory for the genre. However, as soon as Oaks and his bandits enter the town, we are in a world very much the home of the surrealists. We see a drunk with his foot on a little girl; through a window, a man threatens a woman, who bites him; a naked boy stands next to the street, playing with his penis. No wonder one of Oaks’s henchmen keeps on saying he doesn’t like it there. The Stranger too, has a feeling not everything is as it should be; he stays a night with the three major “families” and his suspicions are confirmed. The first night, he sleeps in the Saloon, home to the devious Tembler (Milo Quesada), his mistress, Flory (Marilu Tolo) and the mentally disturbed Evan (Raymond Lovelock); the second, he stays with Zorro/Sorro/Sorrow (in the English dub, his name is pronounced so that it could be either one; for clarity, I will refer to him as Sorrow, as it is such a great name for a villain) after they have kidnapped Evan, so as to try and extort the gold Tembler got from the murdered Oaks, and his black clad, probably gay, cowboys, where after a banquet, they possibly rape Evan. The Stranger does nothing. The last night, he goes to Alderman Ackerman’s (Paco Sanz) and his mad wife, Elizabeth (Patrizia Valturri), where, after releasing Elizabeth from her locked room to seduce the Stranger, Ackerman steals the Stranger’s gun and shoots Tembler with it for the gold. Recounting these events does not truly convey the weirdness of the film; it’s as far from John Ford’s Stagecoach (1938) as is possible to be in the same genre.

The photography, editing, lighting (at times it is lit like a horror movie) and directing all work beautifully together to give the feeling of something very off-kilter. The scene where Sorrow tortures the Stranger by placing him Christ-like on a crucifix (not the only piece of religious symbolism in the film) and releasing vampire bats, moles, iguanas and other animals, is peculiar to say the least. Perhaps it’s the censor’s scissors fault, but the viewer is never sure as to why the Stranger is so terrified of these animals moving around. Maybe in the uncut version, they are shown to be feeding on him. In fact, the present version in which you can watch the film is still missing around five minutes; it is down from two hours to one hundred and fifteen minutes; if these precious scenes were to be restored, we would be able to find out if the rumours that uncut, cannibalism and animal butchery are present.

The acting is hard to judge; Milian is certainly very good in a role that is essentially passive for most of the film, his character looking blankly on at greed and cruelty. The actor in later interviews felt ambiguous about his performance, but I find it hard to imagine another person in the role. The rest of the cast act in a somewhat “coarse”, highly stylised way that actually suits the material, however, only the splendid Roberto Camardiel as Sorrow seems to be enjoying himself. A great villain, he has a wonderful talking parrot who appears too little and amuses himself by playing with toy soldiers and having gluttonous feasts with his men. Questi has said that his experiences as an anti-Fascist partisan during World War II in the mountains in Italy, so Sorrow’s black clad bandits, I suppose, are suppose to represent Mussolini’s soldiers and, a large guess this, the townsfolk are standing in for the middle classes of Italy who complacently let a dictator seize power and then did nothing about it. But if the film is a Western “version” of his two years as a rebel, who do the Stranger or Oaks and his men represent? An intriguing question that only adds another layer of mystery on to this film.

Its aforementioned censor ship problems arouse from the violence in the movie. I can understand why, as it certainly is one of the most bloodiest of all Spaghetti Westerns (but it is not without competition; in the later The Fighting Fists of Shanghai Joe (1973), a kung-fu Western that is surprisingly good, you see eyes gorged out, arms chopped off and a person falling into a spiked pit, all with luridly red blood). A man’s body is ripped apart by crazed townspeople when they learn he was shot by gold bullets, two people are killed by having molten gold fall on them and there are more hangings and shootings than virtually any other Spaghetti. These goings on are underlined by a fine music score by Ivan Vandor, although he repeats the same rift too many times; this is probably the only flaw in the motion picture.

Django Kill, if You Live, Shoot! is one of the very best Spaghetti Westerns for its surreal atmosphere, fantastic directing, editing and photography, and layers of meaning. 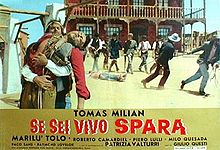 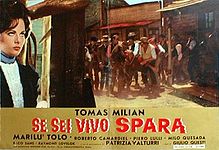 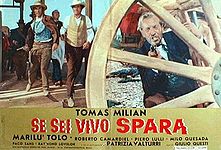 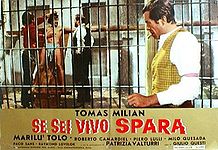 Retrieved from "https://www.spaghetti-western.net/index.php?title=Django_Kill,_If_You_Live,_Shoot!_Review_B&oldid=111156"
Categories:
Cookies help us deliver our services. By using our services, you agree to our use of cookies.