A stranger witnesses a massacre, makes a few kills himself, and then rides into a border town disputed by two warring factions, one American, one Mexican. If it sounds familiar, it should. Lots of action and good performances by Eastman and Rossi save an otherwise trite oater

The film opens with a scene of a freckled boy playing with his dog, a picture one would rather expect in a Hollywood western, but the next moment a group of Mexicans arrive on the spot, massacring the entire family of the boy, except for this dog. A passer-by appears on top of the hill, witnessing the massacre from a distance; when he reaches the scene of the crime, all bandits but two have left: he quickly neutralizes them and starts pursuing the rest, catching up with them at a farmhouse, where they have killed the owner and are now having a party. With so many brutal killings in the first few minutes of a western, there’s no doubt that we have arrived in the Italian West ...

The opening seems to hold a promise for a different kind of spaghetti western, but what follows is a rather trite variation on the theme of the two warring factions and the stranger in town who becomes the man in the middle. George Eastman is the stranger, called Bill in the Italian version, Django in most others. He’s on his way to the border town of Santa Ana to meet an associate, but the man has already been killed. The town and its surroundings are disputed by a local tyrant called Thompson (who controls the town) and a Mexican bandit called El Santo (who controls the surrounding hills). While accepting a job as a transport guide, the stranger starts brooding on a scheme to play the two hostile gangs off against each other.

This is the only spaghetti western by director Massimo Pupillo, who had done a couple of horror movies prior to this one. His western is a rather indifferent concoction of elements from Leone’s A Fistful of Dollars and Corbucci’s Django: a beautiful woman is forced into a relationship by a madman, two locals (a loner and an mute Mexican boy) are sympathizing with the stranger, and the stranger is beaten up severely when his foul play is discovered (but in the end he’ll be the last man standing). Both Fistful and Django were used more often as a template for a straightforward action western, but Django kills silently has very little momentum. There’s lots of violence - in the opening scene a woman and a boy are shot and there are killings and brutalities throughout the movie - but there’s also a scene set in the saloon that goes on and on and on and on ... Furthermore some of the details are pretty dopey: a house in town is set ablaze and none of the other buildings is affected by the flames and (note this detail) a route through the hills is marked in the style of Little Thumbling. What were they thinking of?

Eastman had made his first appearance in the genre in the final moments of another false Django movie, Alberto De Martino’s Django Shoots First, and this was his first leading role; he’s quite good and Luciano Rossi is - as usual - a convincing madman; his enormous side-whiskers almost turn him into a Dickensian character. Liana Orfei is a delicious heroin of the voluptuous kind but unfortunately her coiffure isn’t really flattering. We also get genre regulars Spartaco Conversi and Ricky Boid (Federico Boido), the latter hamming things up to almost mythical proportions as a nervous, grimacing gunman. The film is standard spaghetti western fare, but it opens with a Hollywoodesque scene and also ends with one: in an elegantly conceived coda, the hero gets the girl, or better: the girl gets the hero. 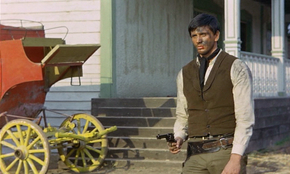 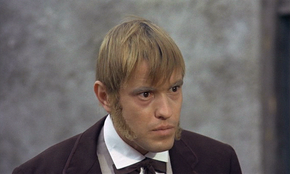 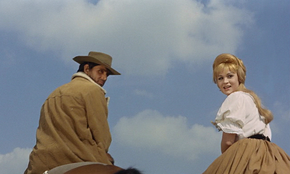 The English language title is a bit puzzling. Does Django approach his victims stealthily, making no noise while killing them? The German title Django tötet leise reflects the same idea. Most probably both titles were inspired by the Italian title Bill, il Taciturno, meaning of course Bill, the taciturn. Problem is that this Bill isn’t really a silent type. In an interview, Eastman declared that director Pupillo had asked him to play the hero in the taciturn style of Clint Eastwood, but Eastman, who had studied the classics and was a screenwriter himself, thought this was a bad idea and made up his own lines, for most part improvising them on the set (1). While the character was turned into a more talkative version of the taciturn Bill, the title wasn’t changed, causing a lot of confusion and leading to some oddly inadequate titles in other languages.

Retrieved from "https://www.spaghetti-western.net/index.php?title=Django_Kills_Silently_Review&oldid=131843"
Categories:
Cookies help us deliver our services. By using our services, you agree to our use of cookies.