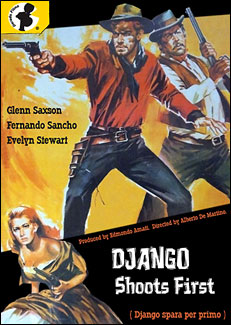 Glenn Saxson (aka Roel Bos) stars as yet another Django. This time, he's set up camp, where a bounty hunter rides in with a body on his horse, who just happens to be Django's father. Django kills the bounty hunter, and collects the bounty himself. He coms to find that in town, his dad was partnered with a seedy banker named Kluster (played quite weasely by Nando Gazzolo), who set up his father to be jailed, escape, and be hunted down. But there's a good side: he also finds that he owns half of the bank and saloon, which, of course, Kluster is not too happy about.