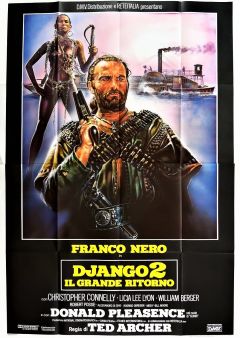 Way back in 1966, director Sergio Corbucci created a character who became one of the most important figures in the spaghetti western genre: Django. He was so important than dozens of movies were re-titled (mostly German releases) to incorporate Django into the title even when there was no Django present in the movie (Death Sentence is a prime example). But now over twenty-one years later, an actual sequel was released starring Nero in the role that made him an international star. Now, one has to ask the all important questions - was a sequel necessary twenty-one years later and would it be worthy of the name DJANGO? Read on to find out. 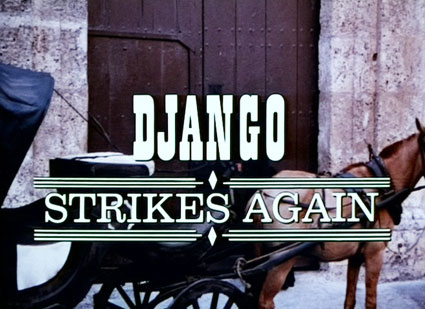 Two aging gunfighters (one played by genre regular William Berger) decide to have one final shootout. Their skills being lackluster from age they realize they can not shoot each other and reminisce about the old days. They both recall a gunfighter that was better than the rest but their discussion is cut short by the arrival of a gunboat which makes short work of the gunmen. With a dying breath one recalls the name: Django. In turns out that our favorite machinegun packing avenger is now a monk going by the name of Brother Ignatius. He is quite content living the monastic life until he finds out his daughter and her mother are in danger. He arrives too late to save the mother from but he finds out his daughter has been taken into the slave trade by Orlowsky (Connelly). Orlowsky or El Diablo as he is referred to runs the local slave trade after having a falling out with the Mexican government. He and his mercenary goons make life a living hell for the locals. 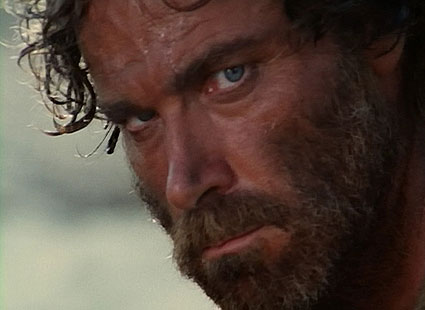 Django not wanting to have his daughter end up in some harem or other nefarious locale sets off after the slavers. He finds her along with hundreds of slaves working in a mine for the greedy Hungarian (yes, Orlowsky is Hungarian). There he meets Prof. Gunn (the late great Donald Pleasence) an entomologist who was forced to find a legendary black butterfly the Mariposa Negra. Orlowsky is hungry to possess this butterfly, as he loves his butterfly collection too; he's such a cultured slave owner. The name of the butterfly is also the name of the gunboat, in case anyone cared. I didn't think you did. Making his escape from the camp Django somehow survives his ordeal (watch what happens after he gets in his iron drum). Washing ashore he miraculously finds a grave marked - you guessed it - Django. Digging up his trusty and slightly rusty machinegun (which fires perfectly the first time) Django makes more like John Rambo this time around turning the baddies into mince meat. Along the way, Rambo - I mean Django - joins forces with a local boy (Carreno) whose sister has also been taken in the slave trade. Together, they try their hardest in making everyone's lives miserable (viewer included). Django and his sidekick finally get the job done by freeing the slaves and killing the bad guys. His daughter decides to stay with local boy and his sister at their village. He rides off vowing to return one day… Let's hope he forgets that vow. 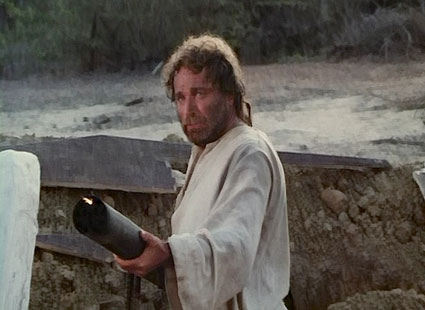 Ok, where to start on this one? This movie has no business being in the lexicon of spaghetti westerns or westerns in general. Like I stated, he acts more like Rambo freeing P.O.W.'s and less like the badass gunfighter from the original movie. While the original character was an anti-hero, not taking sides unless it suited him. this version clearly has a lot on his mind played in a straight hero role. I guess this is what happens to gunslingers decades later (probably why so many die young - they don't want to end up like this guy in a monastery). Even the setting of coastline with the gunboat even makes it feel like a Viet Nam action movie and less like a Spaghetti western. It seems no one knew what to do in terms of plot lines or setting in this one. And to add salt to this festering wound, the soundtrack in spots is absolutely atrocious. They went so far as to use synth snare drums throughout, which reek of 80's action movies. There really was no point to this movie but to put Nero back in the saddle as Django and have him mow down bad guys with his machinegun. Poor Donald Pleasence looks so out of place in it as well (watch him throw dynamite in the liberation scenes). See this one if you must, but be warned this really does not do justice to the name Django by any means.

Retrieved from "https://www.spaghetti-western.net/index.php?title=Django_Strikes_Again_Review_(by_B.J.)&oldid=132613"
Category:
Cookies help us deliver our services. By using our services, you agree to our use of cookies.