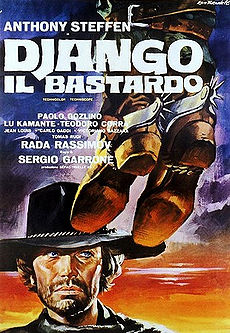 A Mysterious stranger comes to Desert City. Within minutes of his arrival, he guns down several men. Their leader's headstone already prepared. He continues in these killings until he comes to his last target, Rod Murdock. 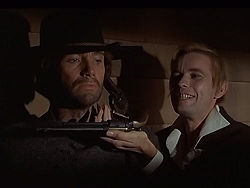 By 1969, the genre was beginning to tire. But the few to be produced were all very important to the genre. Cemetery Without Crosses gave the genre a deeper and more poetic level, Sabata took excess to new heights, and El Puro introduced these films to drugs. But possibly the most interesting of the bunch was Sergio Garrone's "Django the Bastard."

Garrone takes atmosphere and surreal to new horizons. The film has a certain feel to it that would only be seen in Gothic horror. Several Spaghetti Westerns would use the supernatural anti hero theme but none are as explicit as in this film. Those films merely would hint at possibilities but here, the hero is a ghost. Or that is how he appears. The atmosphere reflects this horror style. The dark, gloomy weather, green vegetation, and overall dark feel create a very strong atmosphere. This alone is probably the film's strongest aspect. Aong with the mysterious anti hero.

The film, however, is not without flaws. Although it is very suspenseful and creepy, it falters in one key area. The lack of an interesting villain. This could be the falt of Riccardo Garrone who's appearances don't differ from that of almost all the grotesque gunmen seen in all of these films. He looks like anyone else. Or maybe it is that because he looks so normal, that the fact he is so one dimensional starts to show. Franco Ressel in Sabat had a distinguishing appearance which masked his lack of character depth. In this film, most of the screen time is given to the villain so the lack of interest the character creates slows the pace down. Steffen is no less one dimensional but his character has an ark. He has certain aspects to his character that take over you'r interest and makes it a pleasure to watch his every step.

His step also has uniqueness. He walks at a very slow pace. This is often filmed with a certain showcasing touch. Hinting at the characters supernaturality. This is one of the many plus sides to the film. The camera work is especially noteworthy. When I say "showcasing affect", I mean that Steffen's walking is filmed in a way to showcase the great camera work. Gino Santini does an exceptional job. He uses several odd angles to "intensify" some sequences. When Steffen guns down his first bunch, his walk to their bunkhouse is filmed in an effective way. Shots of him walking at a distance cut to shots looking down on him. Then when he begins to shoot, rapid cuts looking up at Steffen add the afore mentioned intensity. It makes this otherwise simple scene a unique intro. A certain situation also seems to be apparent here. When George A. Romero made Night of the living dead, he had a budget that didn't even match half of the non existent budget on A Fistful of Dollars. Both of these films were phenomenal successes and are now cult films. When these two were given bigger budgets, they were far less successful. I suppose this is the long way of saying that circumstances can bring the best out of people. This film has a noticeably low budget but makes the most of what was available to make a very good film. It was shot in Italy. The script calls for a few desert sequences but only sandpits outside Rome were available to Garrone. Most of these low budget spaghettis use the Italian locations and turn out to be very impressive films. This is also a very impressive film.

There is some speculation that this film was the influence for Clint Eastwood's High Plains Drifter. I believe this to be very unlikely and probably more coincidence than fact. Sure, both films present a hero with seemingly supernatural abilities. But one must remember that these films are very obscure to North Americans and few received a wide release in America. So it is very unlikely that Eastwood ever saw this film. There is also the fact that Eastwood has stated in interviews that his character was not intended to be supernatural. It is all most likely coincidence. Hang Em' High bears similarities with Great Silence with Eastwood's scar and cigar in drink provoking. But that film had no North American release and also must be untrue.

The directing is very well done by Sergio Garrone. He keeps the pace going strong but it does falter near the end. He creates atmosphere to mask his minuscule budget and creates a very atmospheric film. He uses innovative camera work to good affect. There is even an early use of slow motion death on display. In the same scene, it appears that he cracked the camera lens when filming the three chief villains together to distort their images.He uses a kaleidoscope affect in one scene and uses night scenes for almost half the movie. These are filmed in a skilful style that never obscures the view and keeps the film interesting. Very good direction.

The acting is typical of a Spaghetti Western. Anthony Steffen is, as always, very stoic and subdued. I would say wooden but that can annoy some of the members of the forum. He underacts appropriately and does what he has to do. He knows how to be cool. Riccardo Garrone. as I said, looks so normal that his characters faults are clearly showing. A very cliched and uninteresting villain.

The music is interesting. It does and doesn't match the movie. It is very fast paced. Uses horns and drums very fast with female singers repeatin "Django" in almost a whisper. It is very enjoyable and could infect you with a case of the whistling. But there is a "love" type theme here that is too soft for this film and I found it slightly annoying. It sounds too Spanish or Mexican for the creepy atmsphere but is a good score none the less.

A very creepy film that more appropiatley resembles a horror film than a Spaghetti Western. It relies heavily on atmosphere and suspense and will no doubtfascinate many viewers. It is one of those movies that every Spaghetti Western fan should see to decide for themselves. It does have faults but has many distinguishing aspects that make this a very interesting and enjoyable Spaghetti Western. Django the Bastard.

Retrieved from "https://www.spaghetti-western.net/index.php?title=Django_the_Bastard_Review&oldid=109408"
Category:
Cookies help us deliver our services. By using our services, you agree to our use of cookies.