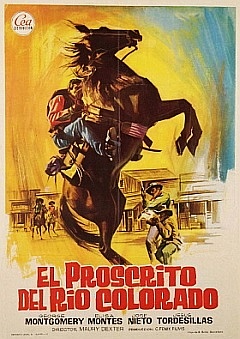 Reese O’Brien (George Montgomery) is the trusted friend of General Camargo, a former revolutionary and now a prosperous rancher with political influence in Mexico City. In his corner of Mexico. Camargo shares an uneasy balance of power with two other men. His neighbour Riaño, is a grandee from an old ruling family. The bandit Espada preys on Camargo and Riaño alike, but he is tolerated by the local villagers. When the general suggests putting a reward on Espada’s head, O’Brien advises against it. It would only rebound on Camargo. The peons “hate the law worse than they fear Espada,” O’Brien says. Camargo proposes to marry Riaño’s daughter Francesca (Elisa Montés), even though he’s much older than she; Camargo will gain respectability from the marriage, Riaño an alliance that will bolster his dwindling fortune.

Francesca’s arrogant brother Alfredo resents the impending marriage, calling the older man “a bandit, a killer,” who “has children all over Mexico” from his hell-raising youth. But his disdain doesn’t prevent him from trying to seduce Camargo’s susceptible teenage daughter Marta in the general’s absence. O’Brien intervenes, beats Alfredo to the draw when the grandee’s son tries to pull a gun on him, and brusquely orders him off Camargo’s property. So Alfredo nurses a grudge against O’Brien too. In turn, Camargo’s friendship with O’Brien begins to fracture when he erroneously begins to think that the American is trying to romance Francesca behind his back.

The various subplots finally come together as a murder mystery. O’Brien finds Alfredo dead on the trail. Who killed him? Camargo? Francesca? Someone else? Francesca asks O’Brien to investigate, even though the American isn’t above suspicion, either. He was an outlaw in Texas, wanted for killing men in a range war, and the victim of a scurrilous rumour that he murdered his wife there. 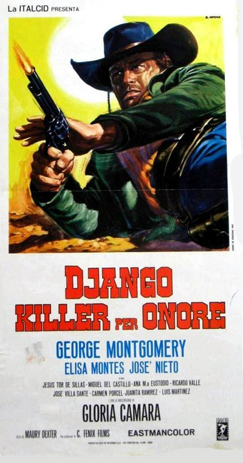 Once the “who shot Alfredo” mystery is introduced, if not before. astute viewers will realise that the storyline follows the plot of Dashiell Hammett’s 1931 crime novel “The Glass Key,” which featured a similar cast of characters. In Hammett’s novel, Camargo’s counterpart is a rough-hewn but ambitious big-city political boss, Madvig, who plans to marry the daughter of aristocratic Senator Henry. The senator is amenable since he needs Madvig’s ability to secure the vote for him. Meanwhile, the boss’s reckless daughter Opal is courted by the senator’s wastrel son, who has amassed gambling debts. The son is murdered, and Madvig’s right-hand man, Beaumont, investigates. Beaumont is beaten by gangsters for refusing to double-cross his friend and patron; in a parallel scene early in the film, O’Brien is beaten by Espada and his men for refusing to betray Camargo. The derivation is obvious, even if uncredited. Hammett’s novel was filmed in 1935 with George Raft and in 1942 with Alan Ladd.

Filmed in Spain by Fénix Cooperative Cinematográfica, Madrid, with an American star (George Montgomery), an American director (Maury Dexter), and a Spanish producer and crew, “El Proscrito del Rio Colorado” was released in the U.S. as “Outlaw of Red River,” one of many Euro-Westerns of the time that were re-titled and dubbed to pass as American productions among undemanding audiences in small towns. George Montgomery (1916-2000) had played stalwart gunslingers, lawmen, and frontier scouts in Hollywood productions as far back as 1937, including three superior B-Westerns of the 1950s that should be better known than they are: “Gun Belt” (1953), “The Lone Gun” (1954), and “Robbers’ Roost” (1955). He had a commanding presence, and even nearing fifty in “Outlaw of Red River,” he had aged well.

“Maury Dexter” sounds like the sort of faux-American pseudonym that Italian and Spanish directors liked to assume when their Euro-Westerns were distributed in the U.S., but in fact he was a Hollywood veteran, and it was his real name. Dexter (1927-2017) had a long list of credits in the early ‘60s for low-budget movies ranging from Westerns ( “Young Guns of Texas,” 1962) to science-fiction (“The Day Mars Invaded Earth,” 1963) and beach-party teen musicals (“Surf Party,” 1964). In the early 1980s, his final credits as director were attached to episodes of the sententious TV series “Little House on the Prairie” and “Highway to Heaven,” of all things. 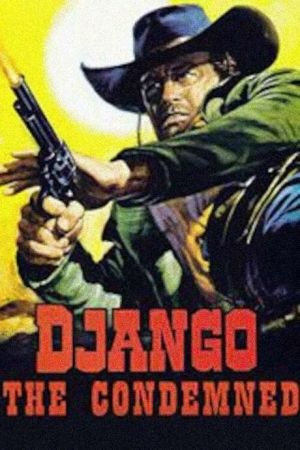 In some versions, “El Proscrito del Rio Colorado” was later passed off as “Django the Condemned” and “Django the Honorable Killer,” with O’Brien’s name re-dubbed as “Django.” A tenuous connection with Sergio Corbucci’s Django offers itself in O’Brien’s back story of loss and revenge. His enemies (not he) fatally shot his wife in the range war in Texas, and he retaliated: “It was at sundown. I waited until after dark, and then I sneaked out and killed every man I could see.” O’Brien, Camargo, and Riaño have a shootout with Espada and his desperados at the end. The battle is staged in passable B-movie, Hollywood style, but needless to say, it’s much less stylish than any of the flamboyant violence in Corbucci’s “Django.”

Retrieved from "https://www.spaghetti-western.net/index.php?title=Django_the_Condemned_review&oldid=134080"
Category:
Cookies help us deliver our services. By using our services, you agree to our use of cookies.