The third western by Alfonso Balcazar, according to some his best. Made in 1965, it is still tributary to the American style of film making, but the more violent approach of the Italian western is definitely breaking through, notably in the scene in which the hero is tortured by the villains. Romolo (Guerrieri) Girolami - director of classics like Johnny Yuma and 10.000 dollari per un massacro - is listed as assistent-director and one wonders if he was responsible for this more violent ('more italian') nature of the movie. 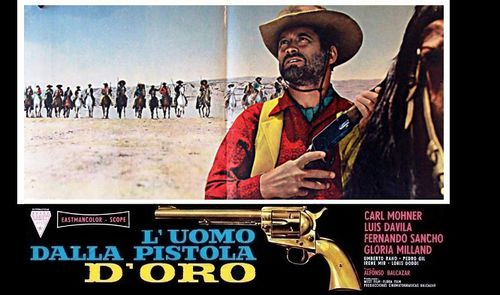 Carl Möhner is Doc, a former surgeon turned drunkard and gambler with a price on his head. A bounty hunter called Slade is on his trail, but Slade has never seen his face. To confuse Slade, Doc adopts the name of a dead man who went by the name of Kitschner and was known for his golden guns. In a small western town Doc is now taken for a famous gunslinger and offered the job of sheriff. He accepts the offer, mainly because he has an eye on a local beauty, but now the bandits who have killed Kitschner, think the man with the golden gun is still alive ...

A bit slow and predictable at first, the story picks up in the second half with a few plot twists and a flamboyant performance by Fernando Sancho as a sadistic Mexican bandit who enjoys shooting unarmed people, including women and children. The script is a nice variation on the doppelgänger motiv, with Mohner as the man who eventually starts identifying himself with the person whose name and fame he has stolen, becoming a better person in the process: the swindler really becomes the sheriff and the defender of the townspeople and also uses his neglected skills as a surgeon in the film's redemptive finale. 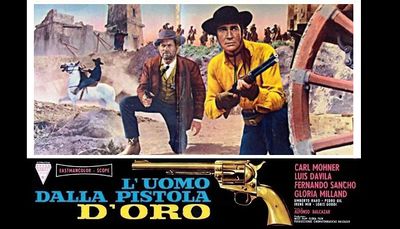 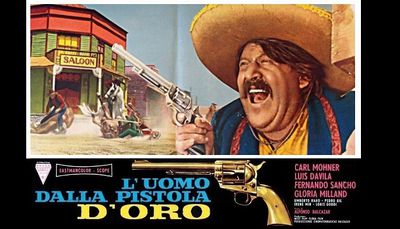 No less than four people contributed to the script and they all seem to have pushed forward their own ideas. As a result the narrative is meandering, with some story elements developed better than others, but at least the busy plot will have you guessing what will happen next. The movie is by no means great, but it's one of those minor genre entries that are easy to enjoy. The part of the intellectual turned cardsharp turned sheriff suits Möhner well and Davila is solid as the man on his trail who eventually becomes his deputy in the border town. The Italian title, L'uomo dalla pistola d'oro/The man with the golden gun, might have been a reference to Edward Dmytryk's Warlock, an very popular film in Mediterranean countries and released as L'homme aux colts d'or (The Man with the Golden Guns) in France and under similar titles in other countries. Even the idea of the duo of gunslingers coming to a western town to restore law and order might have been taken from Dmytryk's movie.

Simon Gelten is a long time contributor to the SWDb. "I'm not as old as Tom B. but I'm working on it. I hope to catch up with him by the end of the next decade.", he says. Simon saw all movies by Sergio Leone and several by Sergio Corbucci in cinema, most of the time in Eindhoven, the city where he was born. Currently, Simon is living in Turnhout, Belgium. Simon is active within the database as both Scherpschutter and his alter ego Tiratore Scelto.
Retrieved from "https://www.spaghetti-western.net/index.php?title=Doc,_Hands_of_Steel_Review&oldid=110882"
Category:
Cookies help us deliver our services. By using our services, you agree to our use of cookies.