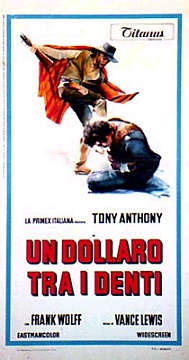 A stranger arrives in a sleepy border town, where he witnesses how a Mexican army regiment is killed by bandits, who take the place of the soldiers in a lucrative deal with the American army. The stranger is hired by the bandits to ‘identify’ them as Federales, but when he’s done his job, the bandit leader tries to eliminate him. The stranger manages to escape but is then trapped and brutally tortured. Finally he faces the gang in a bloody showdown in the town’s street.

The first (and best) of a series of movies in which Tony Anthony plays a character known as ‘The Stranger’. Even though the film was co-produced by Allan Klein, it was made on a shoestring. Only a handful of sets were used, only a handful of lines are spoken. It has often been called a poor man’s A Fistful of Dollars, but Vanzi uses a simplified version of the plot to make a film which definitely bears his personal imprint. Actually, this is a very fine spaghetti western, minimalistic, atmospheric, and very violent. – Scherpschutter

A stranger wearing a poncho was not the only idea directly "borrowed" from A Fistful of Dollars, which led the critics to call A Stranger in Town the most impertinent of all derivatives of Leone's groundbreaking SW. What critics often missed was that Tony Anthony's impertinences absolutely had their own nasty charm, and he and director Luigi Vanzi were self-contained enough to bring in their own sense of taste to the archetypical story. Mean, violent, taciturn, unaffected and garnished with a great villain by Frank Wolff.